Save the Little Ducks!! 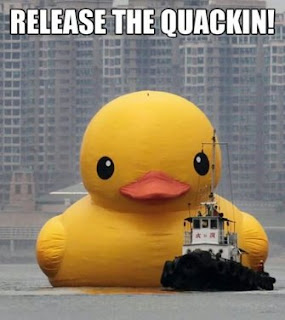 You might think Allentown blogger Michael Molovinsky is a miserable bastard. Actually, he is. He pretty much dislikes everyone. I've had numerous battles with him over the years. But I now know there's one thing he likes - ducks. He notes that, last year, Allentown's hard-working parks department was clear-cutting along Cedar Creek, and accidentally turned several of our web-footed friends into pâté when it mowed over nests.

He's asking the parks department to delay mowing this year until the little ducklings are all hatched and shitting everywhere.

Either that or he's selling the eggs.

I support all efforts to maintain the riparian buffer along Cedar Creek. I agree that keeping the stream in its natural condition, by reducing bank erosion, preserving stream temps through sheltering from the sunlight and protecting all the aquatic species necessary to have a healthy stream far outweigh the benefits of mowing to the stream bank so people can dangle their toes in the water. I'm glad to see that an MS4 community making smarter decisions based on modern science, rather than repeating old timey, sentimentally based practices from the past, that we know are actually really bad for the stream's health. There's already plenty of ornamental grass in the parkway for kids to play in.

You obviously never read his story.

Bernie, duck is a greasy fatty dark meat that in no way tastes like chicken. As for hiding the human waste that flows into Allentowns drinking water intake under cover of the weed wall that is a hole other story that is measured in ppm. The water authority thinks they can hide them facts by bleaching the shit out, Flint has got nothing on this collaboration that is supposedly palatable drinking water. Than there are those that enjoy floaters in there drinking water?

March 16, 2021 at 12:06 PM Anonymous said... Hiding the human waste that flows into Allentowns drinking water intake under cover of the weed wall .

March 16, 2021 at 7:46 AM Anonymous said... I agree that keeping the stream in its natural condition, by reducing bank erosion, preserving stream temps through sheltering from the sunlight and protecting all the aquatic species necessary to have a healthy stream far outweigh the benefits

There are far better alternatives. Ones that have been used for many years before these mosquito breeding weeds came along. Amongst them willow tree roots which did the job. I also might challenge you to find these "aquatic species" of which you speak. After each heavy rainstorm they are flushed down stream into the lake via the directly piped storm drains flowing into the creek. The creek always served as a place where storm water runoff always occurred even long before it became a park area. That always been it's true "natural condition".

What did humans do the first time someone yelled, "duck!" as a warning of potential impact?

MM has an axe to grind with the Wildlands Conservancy. I'm no fan as I feel they lost all common sense on the road to true virtue. They are now a political entity that plays the games to justify what they believe is the proper ends.
Riparian buffers do serve a purpose, regardless if storm water is discharged into the stream. If you look at the picture you will see vertical banks on the stream. This is not a stable system for a water course. If the Wildlands want to put their virtue where their mouth is they will restore the stream by pulling the banks back to a gradual slope and replant with native species that will thrive. Grass, as we know it is not native and is invasive. Maybe someone should give Chris Kocher a copy of Act 46. Stream restoration isn't easy folks.
LVCI - a "natural condition" would be sans humans. We mess everything up.

Fact is waste water drains and storm water run off are almost one in the same. Did you see the picture Mike had in one of his articles some years back that depicted toilet paper in the grass were the reparation wall of weeds is now grown?

depicted toilet paper in the grass
That was along the Little Lehigh.. not Cedar Creek

Anon 6:24, WTF is a "reparation wall of weeds?" You and LVCI should start an environmental consulting firm together. He can suggest environmental alternatives that are better than Mother Nature's natural conditions and you can suggest paying wads of cash to walls of weeds that have been wronged by human waste.