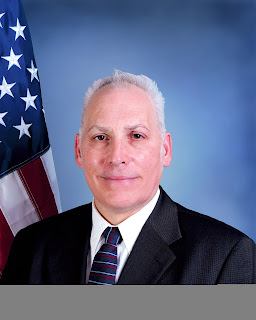 Tony Rybak, an assistant public defender in Northampton County, is running for Magisterial District Judge in South Bethlehem. That position is currently held by Judge Nancy Matos-Gonzalez, but she is stepping down at the end of the year.

Rybak has recently obtained endorsements from two of the most highly respected magistrates to ever serve in Northampton County. Judges Elizabeth Romig-Gainer (Ret.) and Joseph K. Barner (Ret.) have both given Rybak's campaign their blessing.

Rybak, incidentally, was nearly deprived of his right to vote in last year's Presidential race. He voted by provisional ballot because he never received his mail-in ballot.

GOP Chair Lee Snover objected to Rybak's provisional ballot and Rybak was forced to appear before the Elections Commission so that his vote could be counted.

What Snover was really trying to do was suppress Democratic votes.

And she's the one braying about election fraud.

Attorney Jordan Knisley is also running for this seat.

Blogger's Note: I want to clarify that it is Snover, and not Knisley, who is braying.

Impressive candidate and endorsements. Thank you for sharing, Bernie.

I look forward to meeting Mr. Rybak and discussing his candidacy with him.

I sort of met Ms. Knisley. She couldn’t be bothered with getting out of the car to introduce herself to me and sent who I assume is her boyfriend to collect my signature on her petition.

I signed, reluctantly. She will not be getting my vote.

These endorsements are irrelevant. Romig and Barner have been out of office for over a decade and neither served that district.

You said he was a trump supporter. Why would snover want to cancel his vote.

Evan Mimi-Judges should not be giving endorsements . Ethics , look up the word.

Tony Rybak is a great person, he CARES, he is GENUINE and has COMPASSION for others. He will definitely be a great asset, I hope you vote for him.
Ms. Knisley is also a great attorney, but she does not have the years of experience or "love for the people" that Mr. Rybak genuinely has.

Talk to them, you'll know what I'm talking about.