A lone gunman killed 10 people, including a cop, at a Colorado supermarket on Monday. This is obviously highly newsworthy. But not to NorCo GOP Exec candidate Steve Lynch. Here's what he's telling his lynch mob: "Que the mass shootings ...  See how this works folks? Haven't heard this narrative for a while. Now that gun control measures are being pushed through the House ... Voila! Shootings will be front and center! Stop being manipulated and start seeing the truth!"

A reader asked me to post a link to Lynch's remark. Because he has blocked me on Facebook, I am unable to do so. But I have a screenshot, which is posted below. 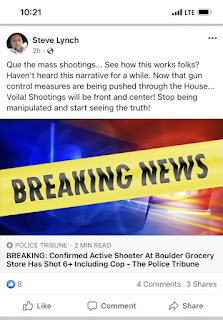 This guy is his own worst enemy and a Democrat's wet dream.

Guaranteed that tonight Tucker, Hannity and Laura will be downplaying the shootings (one of which was a police officer no less - BACK THE BLUE!), with 5 minutes of thoughts and prayers for Boulder of course, followed by 55 minutes out OUTRAGE that the Demz and RaDicAL LIbERaL LeFt are politicizing gun control during an emotionally charged time following another mass shooting by some limp dick Caucasian pussy boy which seems to be the primary base of the Republican party anymore...

yup, he's got a real nose for news! Mass shootings aren't newsworthy because....???

Wet dream? Oh. That explains a lot. Thanks!

The old double standard of liberalism , bigotry, racism and the media. Whatever fits the narrative for the day gets the headlines. As sad as it is that 10 people died yesterday, I don't fully agree with Lynch or any other politician > We seem to recall those riots , sorry Peaceful protest, that destroyed several cites and hurt many people and took their businesses and property were downplayed by many media outlets and by that a certain party to fit their agenda? How about those governors who threw many of our elders in nursing homes to die and all they did was turn their blinders to those who actually did die from their stupidity? Again, the old double political standard. Shameful to day the least. No more morals in our society and have often stated to friends and family, we will destroy ourselves from within. We are getting closer each day.

"Whatever fits the narrative for the day gets the headlines"

Seems to me that a mass shooting in which 10 people are killed is highly newsworthy, and the ones who have started spouting nonsense are idiots like you and Lynch. Do you have any empathy for the victims, which happen to include a police officer? How about expressing some sorrow over this senseless shooting instead of braying away with your own silly talking points?

So he is implying that Democrats and the MSM are the ones behind these mass shootings? The contortions and twisted logic that imbeciles use to justify their warped world views is astounding. As someone mentioned in the earlier Lynch post - is this really the best the GOP can come up with as a candidate? Not that McClure is a saint either, but this election is going to be a layup for him.

When and Why did it become so hard to just get some civic minded, rational thinking individual who just wants to help improve the community, or state or country run for office? Why does it always have to be the loudest and shrillest voices that get the attention?

Honestly the blame lies squarely on cable news channels and the decay of independent newspapers. Cable news is total poison. Corporate press just focuses on bottom line $s and limits coverages to what gets clicks versus what is actually newsworthy.

@10:07 - WTF are you talking about downplaying?!? Those riots were all ANY and EVERY network was covering last summer - FOX News was vilifying one side and MSNBC also highlighting certain agitator involvements, but it certainly wasn't ignored or downplayed.

I also recall watching the death toll from COVID steadily increase day after day, week after week, and the regular acknowledgement that the elderly were the ones taking the brunt of it. I also recall many people whining and complaining about quarantine shut downs, mask wearing and lack of dining out opportunities to limit the spread of the virus in order to keep grandma and grandpa safe.

Don't focus on double standards of just one side - liberals do it and conservatives do it just as well.

I am shocked that of 1130 a.m. only the N.Y.Post is printing the suspects name

If Lynch likes the news he says see here is proof. If he does not like the news he says it's the MSM controlling and manipulating. He really is troubled. We should all be worried that he carries a gun. 'roid rage and all is real!

The suspect - Ahmad Al Aliwi Alissa - has been widely identified within about an hour after it was released. Police needed to notify families first.

10:07 Hateful little cuss aren't you? Our downfall will be from within, as long as fail to recognize you are as guilty as those you attach.
Remember, the meek shall inherit the earth. That is, if there is anything left when you're don't with it.

Likely a case of terrorism.

Your language is disgusting!

AR-15 - It's only one gun that needs to be removed from society, period! You gun nuts have enough other guns to protect yourself or accidently shoot yourselves!

It's not about the number. It's about the right to bear arms and our constitution

This not about gun control. It is about an idiot who would prefer the media not tell you when there's a mass shooting.

We thought that about trump.

Jeez, a complete tinfoil-hat paranoid for county exec! This is what the NorCo GOP has fallen to? Any sane, intelligent committed Repubs MUST find a way to toss the current leadership and re-establish a REAL functional thinking GOP before 2022.

I’m going to guess this AR. Was put together by parts ,and that is often a “Ghost Gun” meaning lower receiver has absent numerical. This will be an issue politically. .

What a maroon this clown Lynch is..I am amazed at his ignorance and arrogance. Cuckoo!

Note that the shooter had bare arms,

12:25, As I note in my post, Lynch has blocked me, so I am unable to provide a link. But before you call me a liar, I have a screenshot of his remarks and will post them.

If every black person purchased an assault rifle and carry it around in public like these gun nuts, Republicans would ban guns in minutes.

@Peter 5:41 - There are just far too many ways for guns to get into the hands of people who are either irresponsible and/or dangerous to society. I'm in no way saying guns should be banned, but the NRA fights tooth n nail to keep silly loopholes in place, using a tired argument that ceding any ground at any time will snowball into outright bans on guns - and that is just plain old dumb.

Remember when Biden bombed Syria and then a few weeks later a guy the FBI knew about who is radicalized and hates America kills 10 US citizens.....probably not related.

Bernie, there are valid points to be made sometimes against the NRA, or any group . Israelis had same problems but difficult political agendas but they allowed citizens to start pack n and attracts on citizens came to grinding halt after Aug of 2018. So some character wants to attack somebody in a mall , parking lot over there ,that it , your out numbered. Now I’m not against training, and class time . Your in remote areas on your bike or walking in non accessible areas between water channels . I’m concerned about the number of people around 13th street walking the park trails ,,the foliage will soon be in bloom and the crazies will be out. I’m not anymore paranoid than a guy on trip that keeps a fully inflated spare tire. Just aware of things that innocent people are not paying attention while looking at phones and ear buds in , their not aware what awaits. Just look at 2020 pedestrian fatalities during pandemic the first half of 2020 ,2,957 people run over ,that about 16 a day,

Do we know the role islamofascist groups in general and ISIS in particular played in this attack on Americans by a foreign-born terrorist?

How dare you risk making our diversity a casualty by pointing that out?!