PJ Koury: No Costs May Be Assessed to the Innocent 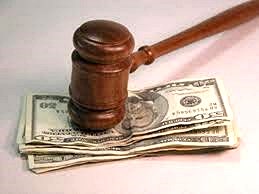 On Friday, I told you about the poor experience that a Nazareth family had in front of Magisterial District  Judge Roy Manwaring II. They had gone to Bethlehem for a night of shopping and dinner, but made a return trip to their parking meter. Ryan Woodmansee used his credit card to add time, but was rewarded with a blank screen. he had no spare change and photographed the meter. Sure enough, when he and his wife returned from dinner that night, a parking ticket awaited them. Since this was a defective meter, they were sure they could appeal the citation and win. So when they went to their hearing on Wednesday, they brought their children. They wanted to teach them that, in America, the system works. What they got instead was a Magisterial District Judge Roy A Manwaring II. They feel that he treated them like garbage

During the hearing, the Bethlehem Parking Authority conceded there had been a glitch that night. Manwaring really had no choice but to dismiss the case. But he still ordered them to pay the court costs, and before they left his little star chamber.

Now I have already told you that Manwaring had no basis for imposing costs on an innocent Defendant. True, I've lost my license to practice law, but not for being a dumb ass. But still, why should anyone much care what some bottom-feeding blogger thinks?

While I understand that my own objections mean nothing, those of the President Judge of Northampton County mean a great deal. PJ Michael Koury, Jr. has instructed Manwaring to refund the money to the Woodmansees. A copy of his directive has been sent to the Woodmansees, but they feel uncomfortable releasing it.

The statute establishing constable fees provides, in pertinent part, "In all criminal cases wherein the defendant is discharged or indigent or the case is otherwise dismissed, the court shall assess to the county the fee provided in this section ... ." Thus, a magisterial district judge has no discretion to assess costs against a Defendant who has been exonerated.

This determination is consistent with United States.Supreme Court rulings, including its recent decision in Nelson v Colorado. . In Giaccio v. Pennsylvania, the US Supreme Court ruled that a Pa. statute authorizing this sanction on innocent people is unconstitutional.

So Bernie you did confirm there were warrant costs for a constable referred to county for payment?

No, They were ordered to be paid by Woodmansee. The constitution was violated. That seems unimportant to you. All you care about is payment to the constable.

No don't dance around the question... was there a warrant issued on this case?

I am not dancing around anything. I have called Manwaring. It'son him if he declines to answer. The docket shows a service fee, so a warrant was issued. But it was issued after Woodmansee had responded to the citation. It was a totally unnecessary cost by an MDJ trying to take care of one of his boys. And dancing around? You don't ID yourself and only seem to give a shite whether the constable gets his pound of flesh. There's a much bigger question here.

Makes one wonder what the big picture is in that office and this DJ? Maybe the Office Inspector General needs to audit and do an inspection of this douchebag.

I would like to know how many innocent people he improperly ordered to pay court costs. I have phoned his office but he has not returned my call.

This is confusing. Did they or did they not respond to the ORIGINAL parking ticket in a timely manner? If they didn't, why should county taxpayers pick up the constable tab for the additional costs incurred?

Why cant you challenge a parking ticket without it going to a state citation? A $5-$15 parking violation becomes a $85 citation to be heard by a neutral party. Same principle, charged a fee to have a hearing just to have a chance to show you're innocent.

The entire issue is dumb. If they wanted to put money in the meter they could have. Get some change. Don't feel privileged. O'Hare is just covering for them because her hates John Brown.

What is Manwaring background before becoming magistrate?

Patriot, He is a lawyer, was a DA, and should know better.

I spoke to a Judge today that said if the case is dismissed you still have to pay the costs associated with it. So you are wrong.

The law is clear. There is no discretion to assess costs against an innocent defendant.

I can assure you, they did NOT appeal in the allotted time...nor did they appeal the original ticket OR the delinquent notice...the system AUTOMATICALLY issued a warrant when the Def FAILS TO RESPOND in time...so get your facts straight instead of making them up

I can assure you that the charges were dismissed, and when that happens, all costs associated with that charge must be borne by the county. That is as per state statute. The PJ has ruled, so go cry in your beer.

The charges were dismissed AFTER there was a warrant issued and the tax payers had to incur these costs due to the inaction of the "innocent" defendant to respond properly, FACT. I would prefer not to pad the Constable's pocket and I applaud Judge Manwaring for trying to hold the inaction of the defendant accountable for some fees. If the law says different then it needs to change.

The underlying charge was filed and therefore the warrant must be paid by the county. The law is very clear and you need to follow it.

Manwaring does it again yesterday by not Allowing the hearing on airbnb citation in Bethlehem to proceed. This means Illegal hotel operations in residential communities to continue in Bethlehem. By choosing to postpone the hearing he failed to enforce a law put in place by the city of Bethlehem & failing to do his job.