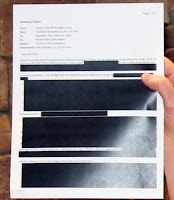 Allentown Mayor Edwin "Fed Ed" Pawlowski has taken transparency to a new level. City Council asked him for a copy of his five-year plan, something the City's Home Rule Charter (Sec. 811) requires him to produce with his Budget every year. He played games so Council members filed a Right-to-Know request. What MacLean is showing is Fed Ed's response, clear as mud. Maybe there's a few fire trucks in there.

It's astonishing that a person who is so secretive and whose indictment is imminent according to his own attorney, can arrogantly thumb his nose at at the public's right to know and the people's elected representatives.
Posted by Bernie O'Hare at 4/20/2017 01:06:00 AM

I'd wager a dozen voters in Allentown care one way or another about this.

He's counting on your apathy. Don't let him down.

Au contraire. Even among people who didn't keep up with the news and didbt know about the FBI indictment, the Morning Call found that 1/3 of registered voters thought he didbt deserve a fourth term. Can you imagine what his supppet among the 8-10% who will actually vote?

In a poll of supervoters conducted as early as early April, already Pawlowski had placed second to O'Connell and equal with several other candidates, all of whom whom have stremgth among the voters who turn out in greatest numbers, i.e. the West End and the Rastside. Even among the Outsiders, door to door candidates for various offices have been spreading the truth about Fed Ed. If the indictment comes down before the primary, word of mouth will make sure the news travels fast, and he'll be limited to the hard core of his base. Even if not, he'll be lucky to get 15%, which will not be enough to win.

This is why we need a better new Mayor. Anyone but Pawlowski or Bennett will be an improvement in the city.

It's in the hands of Jesus now.
Jesus or the US Attorneys office.

Jeanette Eichenwald endorsed Sam Bennett and she's no fool. She was the only council member savvy enough at the time to challenge Pawlowski. She knows what's what and if she is backing Bennett if makes my voting decision very clear. Opinions from a failing disgruntled campaign only makes their candidate look weaker.

No Thiel-we've already had enough dirty politics from him. He would take those antics right into City Hall, and there's been enough of that from Ed. Speaks to his lack of character and that he is being led around by his nose by some questionable characters. At least I hope it's his nose.

Sad indeed, and to trat Council the way he does..City Council gets no respect from Fed Ed. HBis days are numbered and quite frankly at the debate he looked like he does not care anymore. The federal indictment will occur, and WII have an affect ont eh outcome fo the primary. RESIGN ED NOW

Mr. Trotner's assesment is somewhat on target, however, the Chris Borick Muhlenberg College poll, [the the same one that picked Hillary as a 7-point favorite in PA], did not interview voters; it interviewed citizens that probably do not vote. The Chris Casey poll and trending assessment has O'Connell ahead among voters. Indeed, it is sad that possibly a third of the citizens do not know about "Fed Ed's" dirty pay to play scheme, that has netted 7-people already, have no clue about this Chicago deceiver. Even worse, the minorities who support him and form the base of his political support, are absolutely clueless about this non-transparent, self-delusional and arrogant alleged leader. His thumb the nose response to council, the fire department, the Right to know law, and the safety of citizens alike, is reprehensible and non-deserving of another term in office.

People in Allentown are concerned with schools, crime, potholes, and how the city looks. They worry about getting around safely and being able to pay their bills.

They don't really care about some obscure document that looks like it comes out of the Clinton Campaign with large blocks of text blacked out.

So much ado over nothing.

First, I don't consider the research I participated in with others "MY Poll." It was truly a group effort. My main push was to draw it from the most likely voters, those who had voted regularly in municipal primaries in odd numbered years.
Second, what kind of Mayor REDACTS part of a five year Plan?!
WTF, is he buying missiles on the side from North Korea?!

Thiel and his pal Jennings have already approached 2 candidates to ask them to drop out of the race and support him.
Nice clean campaign Thiel.
He also was totally involved and proud of the PAC started by FED ED.
The voters and residents know what is going on.

NO TO THIEL (Jennings/Mann). NO ED-Lite.
NO Sam (Why? Please, really? Hilary-Lite)
RAY IS THE PEOPLES CHOICE: Let's move with confidante to a new day.

Cece you should finish your education. It's confidence. Please let Ray or someone else do the writing.

Dr. McGuire, Daryl Hendricks, Ray O'Connell, & Roger MacLean are the only members of City Council that were not backed by Ed Pawloski's PAC. The others and former council member Jeff Glazier all received support from Fed Ed. Until recently their votes on council showed this support. When Jeanette Eichenwald was on Council, many of here motions and challenges to the Mayor were supported by Ray O'Connell. However they did not have the support of the Mayor's council allies over the years: Jeff Glazier, Julio Guridy, Cynthia Mota, Mike Schlossberg, & Pete Schweyer.

The budget is a large book and undertaking. But when Council members request information and back-up documentation the Pawlowski administration refuses to provide it. Council approved the hiring of more paramedics for EMS and the Mayor has to date refused to hire. Just because there is a line item in the budget does not mean it gets used. The home charter's strong mayor system allows him to deviate as he wants to.

Despite the Bennett shadow campaign the choice is more clear on who we can't vote for, Pawlowski and Bennett(ED-lite) and Theil. The others are acceptable.

RAY is the clear choice.

Bernie,
does the solicitors office have a editor or book making contract with an outside contractor, like the local edited out news venues that are the valleys advertisement for the faked facts put to print.
Thank you very much for doing what you do and you do it very well too!
I am so hoping to see you oppinions be revisited and published on your blog here as avid readers have all been waiting in anticipation.

Sam is a good pick.