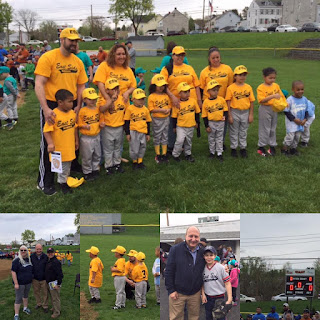 On his Facebook page, Allentown Mayor Edwin "Fed Ed" Pawlowski claims he was at opening day for East Side Memorial Little League yesterday. You won't find him near the Senior Little League.

They were scheduled to play on Saturday, but there's no pitcher's mound at the regulation baseball field along Martin Luther King Highway.

In addition to being unable to keep the firefighters properly equipped, Fed Ed decided that there's no money for a pitcher's mound.

The kids from East Side have to schlepon over to Alton Park for agame and hope noone else was there first.

Organized sports are a good way to keep kids from straying. But Fed Ed makes it harder for Allentown's youth to do the right thing.
Posted by Bernie O'Hare at 4/24/2017 12:37:00 AM

There are kids starving in the county but hey these poor kids don't have a pitchers mound. You are really stretching aren't you?

Fed Ed only does what is good for him, not anybody else!

Fed Ed makes sure that the grant grab get to give back are dole out to incubate the other end of the spectrum were it is not children laughing, singing, playing and dancing. This incubation thing that is helped and guided through his administrative abilities causes jails institutions and death. The deterioration of the parks are just the beggining because living in blight and degredation is part of the main issue. Under his homeschooled charter law not only is the RTK documents black out, the realestate flipp flopp and fly, to paint the pokamon villige is allso filling his back pocket. This is through the past LVRA prez and now the current one that was on the HARB board!
The hidden arena agenda design behind the seens that no one is watching that is the same and similar to the RElocation of the Hamilton street vendors. See criminals cover one criminal activity with many others making for a mound of steaming shit that is hard to even approach because of the unsurmounting stench!

Fed Ed was at Andre Reed Park yesterday with a group of volunteers cleaning up the Park ... Apparently Fed Ed after all these years is not familiar with East Side street names as he had to ask what the name of the next street was and where and the street above that ... The next street was Andre Reed Way forming E. Washington Street which Pawlowski renamed a few years ago ... Saturday it was alleged that Pawlowski made a deal with certain neighbors to switch the Basket courts at Reed park to where the Tennis Courts are and vice versa, Meaning it was a political deal in a political year ... Truthfully because of litter, parking issues and questionable activities by certain hang a rounds the 2 basketball Courts installed there have been a concern of the mainly Syrian-Lebanese neighbors of the block with a certain amount of justification. And of course, in side Andre Reed Park is the Irving Street Swimming Pool which the city wants to demolish and replace with a Spray Park and Wading pool ... Lindsay Taylor the City's Park and recreation director had told Council that she needed immediate action by Council so she could apply for a matching grant for the spray park ... She had indicated that once the grant request was made and approved that it could be changed to include a modernized pool ... Wrong it could not ... Council had been deceived ... And the end result would be that there would be no outdoor swimming pool on the East Side and nowhere in the Dieruff H.S. student territory..... Fed Ed has done it again.

Politically on April 27 Pawlowski is dishing the annual Democratic Party's Rhapsody in Blue Dinner at the Palace on the Easy Side for his own party at his home.Proving that Pawlowski's campaign this year is completely outside the borders of the Democratic Party. He is seeking support and making deals with people who just want something for themselves.

Similar to the fire department, this is what you get when you try to maintain stuff with desperate searches for whatever grant money is out there. It's how you end up with signs of decay like just one operating ladder truck or a baseball field that has no pitchers mound.

Wildlands Conservancy had a grant so they got to turn parks that people use into overgrown weed patches.

It's why you have "spray parks" and not pools.

It's why you have thousands of dollars of new playground equipment but basic maintenance of pretty much everything else is absent.

It's why the city is buying more parkland despite the fact it isn't maintaining what it has.

Ed should take the brunt of the criticism here but City Council deserves it too as they approved all the budgets.

1:95, actually, there are a lot more poor kids in Allentown than anywhere else. A lot of them are hungry. This is just another example of the city letting down its most vulnerable.

First of all Martin Luther King Drive is not a highway. Second of all, I was unaware Eastside Memorial plays at Fountain Park which I assume are the fields you were referring to. Lastly, there are three fields there, two softball and one baseball and yes, the baseball field does have a mound. Softball fields do not have pitchers mounds.

9:23, Furst I did cal Martin Luther King Drive Martin Luther King Highway. Numerous peiple in this area rfer to it that way. Second, Eastside Memorial does not play there bc there is no mound. They have to play at Alton Park bc there is no mound. A baseball ump who was supposed to officiate this game told me about it. Third, no, the diamond on which East Side was supposed to play has no mound.

Where are the parents? No reason why they can't "step up to the plate" and address the issue... Shouldn't be govt involvement!

The Senior League Baseball Division is for boys and girls 13-16 years old, using a conventional 90-foot diamond with a pitching distance of 60 feet, 6 inches.

This is why they need a pitching mound .... Once the Dieruff High School Season ..Andre Reed #1 would be more available..

They do have a 90 foot field at Keck Park but what is its condition... No other 90 foot field except Coco Cola Park exists on the East Side

This is one of a number of things people may consider trivial, but the pile adds up and it paints a bleak picture. We need these outlets for youth so they stay involved in activities and remain engaged. I can't imagine neglecting something so simple makes those kids feel like the city cares about them. How could you believe that the government is there to help you if they can't even provide a pitcher's mound?