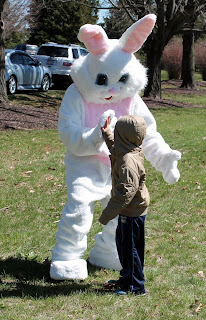 Saturday, Northampton County's Deputy Sheriffs held their annual Easter egg hunt at Louise Moore Park. The entire park was crammed with vehicles, and I estimate that about 1,500 to 2,000 people were there.

I wanted to cover this event, and brought my grandson's dog with me. I was dog-sitting while Dat and his mom were off to Baltimore for an AAU tournament.

Unfortunately, pets are forbidden at Louise Moore. It's probably a bad idea to thumb my nose at a county ordinance at an event being hosted  by deputy sheriffs. I was about to turn around and leave when Administrator Cathy Allen spotted me and volunteered to watch the dog (Suki) for me in the parking lot while I worked.

That was very nice of her and I want to express my appreciation. I was able to photograph part of the event, and then reported Allen for having a dog in the park in violation of county ordinance.

You'd be surprised at how many times they had to zap her with a stun gun before she finally went over.

After the hunt was over, deputies served hot dogs. What would have been really nice is popcorn, but I doubt they have access to an $800 popcorn machine. 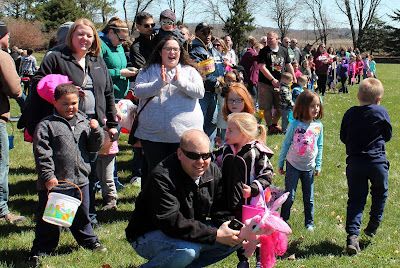 Good to see Harvey the Pookah back in action after his tumultuous relationship with the Mediterranean Manslab fell apart.

The kids love Harvey. He is a generous rabbit disbursing love and good cheer.

Elizabeth was there but I was working. Always a great event!

I'm sorry I missed her.