Fed Ed Has Allentown Firefighters Use Pick-Up as Engine Truck. 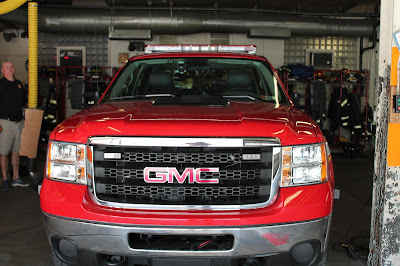 Allentown's firefighters are supposed to have seven engines and two ladder (aerial) trucks at the six fire stations still operating wiyhin the City. They must be available at all times to respond to calls. There should be 146 firefighters, and 17 of them should be on hand to respond to every fire with a ladder truck, three engines and an incident command vehicle. And that's the way things were before Edwin "Fed Ed" became Mayor. Under his reign, the force has shrunk from 146 to 122 firefighters. One of the ladder trucks has been taken out of service. Strangest of all, Fed Ed has the fire department using a pick-up truck as a fire engine. It's a nice truck, a GMC, but it's still just a pick-up truck. It has no water pumping capability or tank, though the bed of the truck is full of equipment that might slow down an inferno.

Jeremy Warmkessel is an Allentown firefighter who saved the life of a three-year old boy while battling a blaze in 2012. He took off his own mask and put it on the boy's face. A class act who now in President of Fire Fighters Local 302, he could keep his head down and ignore this problem, especially since the union contract is in effect until 2020. But as he put it himself, "This is a safety issue."

Though he said the department could always use more people, the real problem is a lack of resources.

He described a fire department that constantly requests new equipment, but gets the cold shoulder from Fed Ed. Even the Chief and Deputy Chief are ignored. "We have a fire chief that really cares about the guys and the city," said he said of Fire Chief Lee Laubach. But Warmkessel noted that trucks originally purchased in 1994 and 1995 are still in service."We're the only department [in the City] that doesn't even have a vehicle replacement plan," he said.

"He is setting our department up for failure," said Warmkessel of Fed Ed.

Fortunately for Allentown residents, firefighter response time is still the same  But how long can things stay that way? Doesn't it make sense to have firefighters respond to a fire with an engine instead of a pick up truck? "The person whose home we're coming to would like it," said Warmkessel. "If you need us, you want us there and you want us there quickly."

Maybe Fed Ed plans to put out fires by praying. 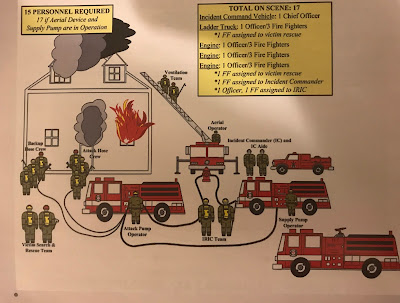 I'm curious in what area Allentown is overindulgent on that could be reduced, with the funds transferred to Public Safety for additional equipment ?

There is a lot of dead wood in the Mayor's office.

Say what you want about the mayor, his wife, Allentown's First Lady, has ended homelessness in the city.
That is no small accomplishment.

When does Allentown's long nightmare end?

Because Ed is from CD this dept has been built up over his years. With Fran going to prison and Council a sleep at the wheel other Dept's get ignored. They should have a plan for Fire trucks like they do for APD and EMS. Its Councils job to look for this so monies are distributed evenly and appropriately.

Fran is an innocent man.

This is fed eds way of cleansing the insurable peril cause clause of its funds, just like him and his neimisists acting as if they were arch enemys when the facts are in and they met in that basement offfice trying to involve the governor in there antics.

Props to the fireman risking his OWN life and giving a child his oxigine mask, there is a few good men out there yet.

This guy is a phony from the beginning. It took him 11-years to finally bring the APD back to a healthy manpower complement, while all along he touts himself a crime fighter and takes credit for the national downswing in violent crime. This is nothing but a vendetta against the AFD for the union challenging, and winning, minimum manpower requirements. He is disgusting and an outright liar; and doesn't care about the citizens of Allentown as judged by his run for Senate and Governor.

It looks like the Queen of Allentown was up early today (4:07, 6:29 am) pushing out propaganda for her husband. She gives a bad name to the concept of empowering women in politics by defending her indefensible husband.

Sam Bennett is the only woman actually running for mayor, not hiding behind a male candidate. Are the firefighters supporting her, or someone else?

OK, so what is the truck being used for? Obviously not for fighting fires. Is it being used for EMS calls? I shake my head when I see a ladder truck making an EMS call. Many times you see an Engine or Truck make an EMS assist call because the paramedics are not close enough. If it is being use properly, it is a cost saving measure.

I had no idea that Allentown did not have a second ladder truck in operation. The article above says that one aerial was purchased in 2008 and the second one was acquired in a 10 year lease starting in 2010. One of them apparently sits in a garage, unmanned.

I was the only resident to speak up when the manpower issue came up for AFD several months ago. I have visited one of the local stations and had conversations with Allentown firefighters about the lack of manpower since I know some of the Allentown firefighters. I also spoke up at city council meetings regarding the fact that due to low manpower AFD is unable to staff two ladder trucks in the city like they did in the past. We have Truck 1 and Truck 2 but right now only one of them is in service and on top of that most of the engines and trucks are understaffed. Most only have two firefighters per engine and truck when they should have at least three if not four.

I remember several years ago there was that massive fire on 8th street and AFD was struggling with resources to battle the blaze. I was listening to the incident on my scanner at the time. I think I still have the recording of the incident. It was an interesting incident to listen to because comm center was asking the BC on the scene for an update on the situation because the mayor was asking and the BC was not happy. He yelled I'll get back to you, we need more manpower. If we had enough resources we could fight the fire. Something along those lines he said but I remember him not being happy at all with being questioned about the fire for the mayor when it was the mayor's fault and city council's fault his staff was understaffed and lacked the resources to fight the fire.

Can you imagine if we ever get multiple fires in the city at the same time that require a ladder truck to be on scene? The city is setting itself up for a lawsuit.

So when someone's house burns down due to lack of available resources he will have effectively caused homelessness again. Ironic isn't it?

Volunteer depts should make it clear that they do not want to get called to the city for every fire with no reimbursement.

Okay, will do. I have to check my saved audio clips from incidents that have happened in the city when I originally ran the scanner feed for AFD.

FYI...Here is a comment from one of the Allentown firefighters I know. "The city continues to grow taller and the expansion of downtown is thriving with new business. The fire department has been cut and we are being placed into an unsafe working environment. AFD had two Aerial units and now we only have one. Our engines that had 4 firefighters, have gone down to 3 or less. Our equipment is on its last leg. We do our best on every call, but it would be nice if we could feel safe at work in a career field that is inherently dangerous to begin with, without all these cuts making it treacherous for us out in the streets."

The reality is that the City needs to raise property taxes to pay for infrastructure and essential equipment, something the Mayor refuses to do because it's bad for him politically. Whoever the next Mayor is, he is going to have to deal with the reality that taxes need to be raised. There hasn't been an increase in 12 years and it's long overdue. That's all there is to it.

This lack of resources effects the ISO rating due to greater risk, ultimately higher insurance premiums for citizens. The mayor and city officials should be pushing for an ISO 1 rating in regards to Fire safety.

I asked why the city was using a pick up truck and not one of the reserve engines from one of the firefighters I know and he says..."Our entire fleet is decimated. Everything ranging from aerial units to reserve trucks to front line engines have issues. Our reserve engine 8 has just been deemed out of service and has been taken off the fleet permanently."

Change starts with politicians who put Emergency Services as a top priority I.E. Fire, Police, departments. Both are willing to risk their lives for another at anytime. The should be NO second hand anything when it comes to the lives of the community and those who do the job to protect them.

After 12 years of Pawloski and His clones the City is still a shooting gallery, the fire department is disseminated but there are no homeless in town

term limits are in effect on May 16th.

Vote for someone other than Ed. Done deal.

It's wise you deleted your comment bc it is flawed in many ways.

You are off topic.

now, check out UNDERMANNED BETHLEHEM, since CALLAHAN gave the dept. and the citizens a raw deal. cutting manpower AND closing a station!

Bernie,
Cute pic on the number of personnel that should be on the fire apparatus. However, I don't know of a single career department in the LV that staffs an engine with 4 people. Most certainly, not with an officer on each engine/truck. Also, a supply engine usually doesn't feed an engine that is already connected to a water supply.

4:07, I hope you are joking, I personally know 2 homeless men who live in Allentown. Maybe FedEd's wife has reduced homelessness (although I would like to know how ) but she certainly has not ended it.

And you have to ask the question: The LCA paid over $250 million for the Allentown Water assets. Is all of it gone? The entire quarter Billion? Where did it all go?

Gotta luv these dem mayors. They don't give a shit about public service, just special interest, money grabs for themselves and their buddies and votes. Where is all the money from the development Mr. Mayor? You know what was suppose to help the taxpayers of the town, not your special interest groups!