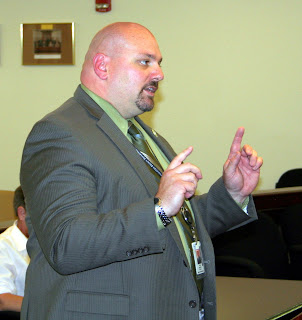 When Dan Keen was confirmed as Corrections Director in late 2014, he promised he'd be moving to this area. He did move, but to Hazleton. That's 62 miles away from Easton and is hardly what I consider to be this area. Keen already has a two-hour commute every day, but on top of that, appears to be a rolling stone.

Keen is a very dedicated NorCo employee. He is careful in his expense reports to avoid charging the county any more for meals than he is permitted. And he always responds to emails or calls, usually within a few hours. But 39 days over two years above and beyond the normal holidays and vacations is bound to breed resentment, and has. I wrote him once before about complaints that he is never at the jail. He said he was surprised at the complaint because he is on the go 24/7.  As much as I appreciate what he does, it is irresponsible and poor management to put a prison director on the road for 39 days over two years.

That is no fault of Keen. That's on Executive John Brown, who should recognize that Director of Corrections is not a wandering hockey goalie.

Keen tells me his travel this year is related to his investigation and research into a new jail. Well, he's not going to be able to house county inmates in Windham, Maine. Besides, a new jail is very far from reality. It will be extremely unpopular politically and require a hefty tax hike.

Sounds like he is in a training program. Time away is excessive.

Dust in the wind. Isn't this just the Brown MO.

Another Brown Director abusing the system. That's why professional corrections consultants are paid the big bucks in forming a workable Jail system. [The Penn Stater is an excellent hotel with a top notch dining facility]. This abuse goes on and on in NC. A housecleaning, from council on up is needed!

hE IS A TRUE ROLLING STONE... UMM MAYBE MORE LIKE A PATTY OF BROWNS STAINS POOP?

Does this really seem like he needs all these trips? How about a comparison to what was submitted by the person who held the job before? Woodlock resort, really? Come on this sounds like BS and not what is need for work. Thanks Bernie, for letting the people who pay for this crap know where the county dollars are spent. NOT ON SERVICES!

Another overpaid Brown consultant. The beat goes on. Lamont got to be licking his lips in anticipation. JB might as well raise the white flag right now and let the R's find a suitable candidate instead of flushing money down the drain on the current county despot.

You shouldn't be shocked by this story at all BO, numerous people have been trying to alert you about this issue. Sadly these numbers don't begin to tell the entire tale. He averages between 2-3 days per week since he's started as DOC and is a human vacuum on the wallets of taxpayers of this county. You might want to dig a little deeper into his jaunts out to Penn State because he's grabbing some extra cash via a side gig at state college. He's basically delegating most of his duties to an executive secretary who has proven time and time again that she is in over her head. This executive secretary is an underling of Amy Trapp's who fancies herself as an HR wiz. She's been filling in for Al Crivellaro since he "retired" and she's actually making most of us wish he'd return as hard as that may be to believe. I've been through several DOC's in my time as an officer and he is by the far the worst in the history of NCP (even worse than Cindy Marakovits). The calendar and cameras don't lie so please don't try and deny his appalling attendance. If we had more time I'd address other members of his administration but that can wait until another day.