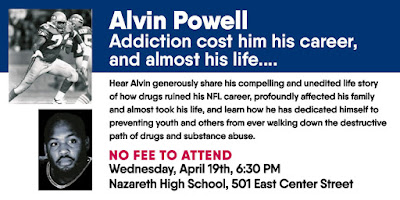 Alvin Powell, a former National Football League (NFL) lineman with the Seattle Seahawks and Miami Dolphins, will address his battle with drag and alcohol addition at Nazareth High School on Wednesday, April 19, at 6:30 pm.

He is a crack cocaine addict who at his worst was living in a church, spending his time “looking for deals to get money to buy cocaine”. He was an embarrassment to his friends and family. “I couldn’t die quick enough” he says.

Having hit bottom, he has dedicated his life to helping others break through the crises brought on by the shackles of addiction and to prevent youth and others from ever walking down the destructive path of drugs and substance abuse.

Through his Saving Station Foundation he has spoken at hundreds of high schools, universities, sports associations, corporate events, conferences and First Nation communities. Alvin generously shares his compelling and unedited life story of how drugs ruined his NFL career, profoundly affected his family and almost took his life.

The event is sponsored in part by the Northampton County Drug and Alcohol Division and will be attended by several Drug Court participants.
Posted by Bernie O'Hare at 4/13/2017 12:00:00 AM

Email ThisBlogThis!Share to TwitterShare to FacebookShare to Pinterest
Labels: addiction