Bethlehem Township Commissioners have awarded $1.8 million in contracts to renovate the Township's 11-year old community center. They did so with little discussion at their April 3 meeting. In July, Entech Engineering's Ryan Kennedy reported that gutters were improperly sloped on the metal roof over the facility's natatorium, leading to pockets of standing water that seep into the building. He identified about $2.5 million in repairs for a 50,000 sq ft building that cost $10.3 million to build and is shackled by a mortgage requiring a $725,000 annual payment.

The contracts were awarded to the lowest responsible bidders. Brady Construction won the construction contract for $1.1 million. HT Lyons will be paid $137,680 for the plumbing. The $533,550 HVAC bid went to Elliot-Lewis Corp. Finally, Wind Gap Electric will receive $41,700 for the electrical work.

Board President Michael Hudak recused himself from voting for the H.T.Lyons contract because of his employment there as a metal fabricator. Aside from that recusal, all the votes were unanimous. That includes Pat Breslin, who complained about the repairs during a radio show in January, adding that the "government shouldn't be in the gym business."

He quietly voted four times to keep the government in the gym business.

Construction is expected to start on July 24 and be finished by the end of October.

In addition to repairs at the community center, Commissioners voted unanimously to seek a $86,779.50 grant from Northampton County's Municipal Park program to match the money the township plans to spend for a face lift at Comer Park. Located along Dewalt Street in one of the Township's oldest neighborhoods, Comer Park has play equipment, a gazebo, picnic tables, park benches and play courts. The makeover's centerpiece will be a "fitness fun" structure for children aged five to 12 years, complete with multiple slides, swings, climbing structures and platforms.

In addition to providing for recreational resources, Commissioners dabbled a bit in the electoral process. At the beginning of the meeting, resident Barry Roth complained about new polling places established by Northampton County for the four wards. He's worried that people standing in line at the wrong polling place will just go home instead of voting. Manager Melissa Shafer and Solicitor Jim Broughal told Roth that the county, and not the township, selects polling places.

At the end of the meeting, Malissa Davis returned to the subject of elections. In addition the voter suppression that occurs when polling places change, Davis is concerned about the gerrymander. She said that an independent commission, and not politicians, should draw the boundary lines of congressional districts. But that requires an amendment to the state constitution. A bipartisan effort is slowly gaining steam, thanks in large part to the grass roots efforts of FairDistrictsPa. She asked Commissioners whether FairDistrictsPa could make a presentation when Commissioners meet again in two weeks.  "I think that'sa good idea," responded President Mike Hudak. 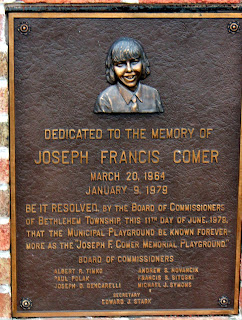 Blogger's Question: Comer Park is named in honor of Joseph F.Comer, who died in 1979 a few months shy of his 15th birthday. Unfortunately, that's all I know about Comer. If you have any information concerning this young man whose life was cut short, please share it with us.
Posted by Bernie O'Hare at 4/04/2017 12:00:00 AM

Government really shouldn't be in the gym business. And spending $2 million after just 11 years proves it.

They must have a lot of discretionary money for blowing approximately 2.6 Million. I guess will see all three municipal bargaining units this year asking for annual 5% increases for the forseeable future. The most heavily taxed township in the Lehigh Valley keeps piling on the debt.

@7:09,
The most heavily taxed township in Northampton county is Palmer, at 8.25 mills. BT is also far from the highest of all non-city rates. That dubious honor belongs to the Borough of Hellertown, at 20.25 mills.

Bernie,
Joseph Comer was a young man who lived near the park named in his honor. He would spend many hours playing in the park, at what was then the Municipal Building (now the Coolidge building). Sadly, he succumbed to cystic fibrosis in 1979. The park, which had no formal name, was then given its current name.

@10:25 Thanks for the history. Sad, but should not be forgotten.

Thanks very much for the history.

I did not have the privilege of knowing Joey, but I've had the privilege of hearing many stories about his youthful adventures and his bravery and courage as he dealt with his serious illness. Joey's father is Martin W. Comer, longtime community activist and life member of the Bethlehem Township Volunteer Fire Company (where, at age 84, he's still active and responding to calls for help). No parent should ever suffer the experience of losing a child. 38 years after this tragedy, I can clearly see the pain and suffering Marty continues to feel as a result; I also see how proud he continues to be of Joey and what he accomplished in his too short time on earth.

"And in the end it's not the years in your life that count; it's the life in your years."

6:20 I wish our township would have biilt one of these years ago. Gym space for youth sports is hard to find. Call it a Community Sr Center and then it probably would be OK. Once built, I would expect residents and teams t pay small fees for usage. Having access to community gym space never prevented me from being a memebr of a commercial gym. They serve different purpose. If we can support million dollar truf fields, why not indoor basketball, cheerleading, vollyball, etc? Where else would you have a townhall meeting?