Cusick At the Bat 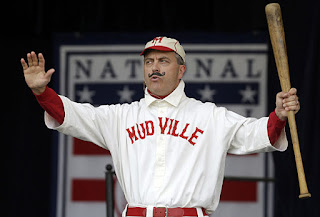 Council President John Cusick should think twice about trying out for the Phillies. He struck out last night in a seemingly Quixotic quest to shackle Northampton County residents with a new tax in the form of a $5 vehicle registration fee that would make its way from the state to county coffers.

When Cusick initially proposed the idea last summer, it failed in a 5 to 3 vote

“That ain’t my style," said Cusick. “Strike one!” the umpire said.

Cusick resurrected the registration hike in December after Executive John Brown had embarked on an aggressive bridge repair plan. But the matter was tabled without discussion.

He signaled to the pitcher, and once more the dun sphere flew;
But Cusick still ignored it and the umpire said, “Strike two!”

Last night, Cusick took his third and swing. He explained that he knows the fee is unpopular but could be used because PennDot has promised to pay $2 million to any county with a bridge bundling program that imposes a registration hike. He noted the county is on the hook for $4 million this and next year for the bridge project. A registration hike would bring in $1.2 million for the county, and an additional $2 million from the state, he noted.

"I don't like this fee, but not only are you rejecting the fee, but you are rejecting a potential $2 million in matching funds," he said.

And now the pitcher holds the ball, and now he lets it go,
And now the air is shattered by the force of Cusick's blow.

"I really don't like the way the state or federal government tries to bribe you into doing what you don't want to do," observed Phillips. Noting that the state's rainy day fund is empty, he ridiculed the state for promising money it doesn't have.

Phillips later admitted that he borrowed his bribery analogy from Peg Ferraro.

Three strikes in baseball and you're out. But not government. Cusick may bring this matter up again at the endof the year, when the budget picture for 2018 becomes more clear.
Posted by Bernie O'Hare at 4/07/2017 12:00:00 AM

Why the Hell did Ken Kraft vote for this outrageous tax?

We all know what the game plan is on this deal. Since the republican councilmen at large are all up for re-election this year they will get Cusick to hold off until after the election. Once they all get safely reelected(as fiscal conservatives) they will then change their minds and vote for this tax.

Their plan is as clear as crystal.

Cusick should resign and Kraft should be rebuked for co-sponsoring this form of bribery from a state that is broke cannot be counted on to follow through on their extortion!

It's a tax. Raise the fee and you've actually raised my taxes. Yeah, yeah, it's only equivalent to a cup of coffee. We're drowning in coffee and these heartless bloodsuckers want to order another cup. Enough, already.

How Cusick is back on council is baffling to anyone that has a brain. Kraft voting yes for this is a slap in the face to every tax paying citizen.