Hey, I Have Had No Thai Food For a Week! 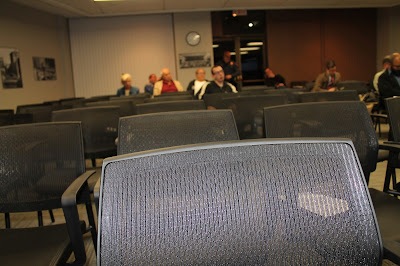 After leaving NorCo Council yesterday, I traveled to Allentown because I thought firefighters would be there to tell City Council that deteriorating equipment is endangering public safety and their own lives. When I got there, the meeting had already started and the room was packed. But as is the case with most meetings, the front row is almost always empty, so that's where I went. I plopped down, took off my Barmah hat and began snapping pictures. When I turned to get a photo of the audience, the four previously packed rows behind me had gone to the other side of the room. Poor Julian Kern bravely tried to keep his seat, but eventually passed out and was taken away.  He'll be complaining about headaches on Facebook for the next several weeks.

Haven't had real Thai food since I left Korat Air Base in 1974. If they don't serve Kaupat, its not authentic.

The green papaya salad is another giveaway. There better be fish sauce and brine shrimp in it.

Kerrie is always complaining about some mysterious ailment on Fakebook. The guy is a hypochondriac. Was his (and yours) buddy Ken Heffenfarter there?

I thought Ken and Julian had some kind of post coming out refuting that they are criminals. Did I miss it?

Julian had a post to establish he paid rent. Heffenfarter is a criminal who promised he'd be paying his debt to society. he owes Northampton County $1,155.25 and has not paid a dime since 8/30/11.

You're an idiot. I was diagnosed with lyme disease and see Neurology.

Look me up. You will find I never had a criminal past. If I did I wouldn't he allowed to work for a national security company. This just shows your stupidity.

Julian, I was joking when I said you passed out. And you have no criminal record and submitted proof that you paid your rent. I have no quarrel with you and was kidding around in my own offbeat way. I am sorry that I offended you.

Oh okay, I wasn't sure if it was a joke or an attack since I seem to get attacked on this blog any time my name is mentioned.

However the headache comment is kinda messed up because I do suffer from migraines and they are not fun to have.

Julian take a chill pill, man. You're posting right and left and kind of out in left field here. It's just Bernie's sense of humor.

I actually was replying to the other comments that were made but for some reason it's showing up comment after comment.

Shit I must have just missed you as from your one pic you can see my seat is empty and did not have the normal hat propped up. Please make me the brunt and there is allot of shit to sling there as they have been digging it up for many years and I had received a check from the county for something in the early 90's.
"DeeD Searchers Needed" to search out the indigent and elderly family less too? hahaha getgot