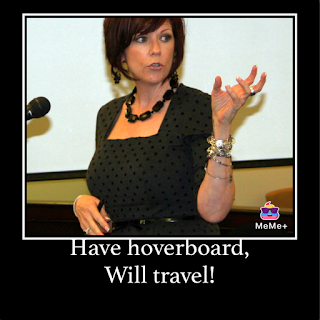 When Amy Trapp was hired as NorCo's Human Resources Director in late December 2015, she persuaded Council that she was worth every penny of her $104,328 price tag. Hey, those hoverboards she rides in the third floor cost money! I'd generally agree that you get what you pay for, so for that sum, I'd expect  a Director who is already a qualified professional. Not someone who refers to the county workforce, its backbone, as "entitled spoiled brat government employees" who "need to get on board." And certainly not someone who jams up the county for "staff training and development" costs while insisting that others punch a timeclock.

In response to a right-to-know request filed with Controller Steve Barron, I've learned that taxpayers have paid $96,172.92 for "staff training and development" expenses in the HR office since 2010.

Do you think that HR professionals are trained to call county workers "entitled spoiled brat government employees?" We are wasting taxpayer money so that Trapp can pad her resume with more credentials for her next job. This does explain why no one ever sees her.
Posted by Bernie O'Hare at 4/06/2017 03:22:00 AM

Money should have been spent on training of Gracedale employees

Wow she spent almost 2x my salary for working 40+ hrs a week! She needs all that training to send out the few e-mails a month? When will this end? This money comes from many folks who struggle to keep their homes. Struggle to put food on the table for their families. This is money that should be spent on SERVING County residents. Not serving themselves.

Thank you Bernie!!!!!! I was thinking the same thing yesterday!!!! Take it out of her salary and put in the employees, the HARD WORKING, UNDER PAID, GREAT EMPLOYEES that have their benefits reduced so the HR QUEEN OF SHEBA and her handlers can fly to destinations and spend taxpayers money, while there is no management physically in the office at times. Spoiled Entitled Brats would need the qualifications to be hired. SHE NEEDS TO GO!!!!!!!

Question - are these expenses incurred for training that is solely for her, or does it include training for staff across the board?

Granted, the number seemed to escalate VERY quickly, but before making a statement that it is for "padding her resume with credentials", more detail should be obtained provided before making what can be construed as a personal attack.

nice try. Norco has functioned in the dark ages and has not caught up with techology like most other counties have. Do you know what the 56K in training was for?

Of course you do, but that does not fit your narrative. How much $$$ was saved by new technology. ?

You would advocate using a horse and buggy if it meant smearing someone you hate so much. You forgot to mention Stoffa left the county with a multi million structural deficit. We know...hes your mancrush.

You need to really disguise yourself better. Using terms that cabinet members use in a comment really makes it bad. You may as well sign your name because we know who you are. We would love to know what the training was for. Maybe a call to the controller's tip line is in order on that one. What type of new technology are you using? Time clocks? Who is going to use those things? The spoiled brats are on to you and are keeping track of when you are in your office and not in your office.

I agree with 0721 hours. However, the useless POS on council do not care about excessive expenditures. One of them, [Seth Vaughn] didn't even show up for the 2017 budget meeting, stating, "who cares, I'll still get elected". Good government starts from the head down, the Brown/Allen/Trapp cabal to the useless council. Fire them all!

Rid of us this POS wack job. No one has any respect and laughs as she "hovers" around. Let her accidently hit me when walking the hallway just once. This is just sick-

In BT, that is the policy,and I have seen them shoot down some "training" they consider bullshit. I think ALL expenditures for training and staff development should be part of the agenda every month. Department heads should be required to justify this expense at every Personnel committee hearing.

"Question - are these expenses incurred for training that is solely for her, or does it include training for staff across the board?"

This is strictly within her department and is excessive.

I don't know Ms. Trapp and I don't really care for John Brown, but if anyone runs or conducts any type of business that requires general and liability insurance (and undoubtedly NorCo has general and liability insurance), insurance companies are mandating training for corporate compliance purposes (especially in HR and Obamacare/HIPAA) or you face rising insurance rates. Considering that NorCo has lost a few employment related lawsuits recently, it's no surprise to me that their training expenses have gone up. You can argue that but/for the current administration those costs would not have occurred, but sooner or later a former employee is going to sue.

Not by a factor of 10 in just one year. That is insane.

Bernie, why didn't the picture depict Omar the tent makers white pleather skirt outfit? Giggles and jiggles formally of Allentown purchased these article from one in the same as tent making is coming to a closure!

Who is "we"? The records in the controller's office should be public record(most of). Please help yourself and ask away. Why yap when you can do and find out yourself? Maybe even just ask? The "us" vs "them" mentality is not good for anyone. Look at the log in your own eye first. I have no horse in this race, just asking. How do folks live with such enmity in their heart? We the People.

Jeff, I think the "we" who are on to Amy Trapp are the "entitled spoiled brat government employees." I would not expect them to sign their names since she likes to threaten people with termination. But in fairness to her, any vulgar comments will be deleted. I have already deleted one posted by a troll, not a county employee.

Is it true that wacko Von Trapp is still using a hover board in the courthouse? Talk about liability and workers comp concerns! No HR department would allow an employee to conduct such risky behavior in the workplace. Von Trapp is a six-figure fraud if she engages in conduct that should not be tolerated.

A fair question would be: How many people were trained for this sum?

Its totally ridiculous. Her department is given anything she wants while I hear other departments are struggling. Brown needs to go with all of his cronies. Say good by to nepotism.

1:22, That is a fair question and I will be doing a more in-depth piece. I am filing a formal RTK with the county.

It seems yet another female has rejected BO

Wow. Staff being trained properly finally! Scandal in the County. Come on!

I'm just glad that as an employee I can finally call HR and get answers. Previous people wouldn't even answer the phone or look into concerns.

Didn't see von Trapp at County Council meeting. Oh that's right, she is getting trained to do her job on taxpayer dollars. Tomorrow is Friday, so she either will not be in at all or just for a part of the day, while the Spoiled Entitled Brat Government workers will need to work the whole day.

what you have is a person who is "big people"
everyone else falls into the "little people" group.
the mere fact anyone would question a "big person" makes you an enemy.
"big people" are not required to answer to anyone.

@ 7:03 and 7:06 you can call, but will get threatened with termination at random. Also these numbers seem excessive. Several large
Departments get trained and don't have bills like this!

@9:52...I've called several times on many issues and spoke with several people including Amy Trapp and I never was threatened with termination. Also people are making assumptions on a number but don't know the detail behind it. Maybe the type of training an HR department requires isn't free like many trainings other departments get from the state, etc. I personally would rather have trained people in departments rather than people who aren't up to speed on what is going on. I don't care what department it's in. Problem with the County is that no matter what you do, someone will find an issue with it. People are jumping to judge without the full details. My main point was there has to be bigger issues in the County then a department spending money to educate staff. Just my opinion.

Mr. O'Hare, I would just like to quote your own October 20, 2016, blog post regarding at least part of that training budget that you imply, not-at-all-subtly, has been used to "pad Ms. Trapp's resume".... In that blog post, you, yourself, wrote: "She also encourages training, and had five people get management certificates over the past year through Northampton Community College. There has been management training in Human Services, and it is scheduled to start at Public Works today." So her advocacy of training seemed to be a positive for you then, but now she's being vilified for training her staff and others around the county? That just doesn't sit right with me... You seem to have some personal vendetta against her, in my opinion. But, since it doesn't fit in with your agenda, I doubt you'll publish your right to know results. Because I think what you find out is going to be the direct opposite of the vitriole you are currently spewing.

I have no quarrel with honest-to-goodness training. The jail,for example, has twice the amount if training as at HR, and it is necessary. But when I see a trip to Las Vegas, a red flag goes up. When I see training that costs ten times what was spent in previous years, two red flags go up. When it is in an office with an $800 popcorn machine obtained by raiding the health and wellness fun, three red flags go up. I do not vilify her for needed training. I will vilify her for abuse of the public purse if that is what I find.