Angle's Chrin Deal Has Generated $204,000 For Farmland Preservation Since 2012 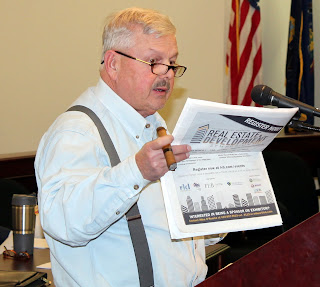 In October 2011, Charles Chrin sought a TIF from Northampton County for a 689-acre business park he was proposing at the northern end of Palmer Township. A TIF is a special arrangement which allows a developer to use the increase in real estate taxes to fund more infrastructure. It requires the approval of the municipality, school board and county.

Chrin had a good argument. For one thing, he was willing to pay for the cost of an Interchange along Route 33 near Tatamy. Even more importantly, it was expected to produce 3,500 jobs. But it gobbles up 689 acre of farmland.

The TIF had already been approved by Palmer Township and the Easton School District. But the County had to sign off as well.

Angle negotiated a commitment from Chrin to set aside 1.5 per cent of the gross sales price of each lot as sold for farmland preservation, capped at $2 million. According to then Executive Stoffa, this money would be used to get matching grants from the state, and thus enable the County to preserve 650 acres of farmland.

"Nobody else could have done it," Stoffa told the Farmland Preservation Board the following year.

"It's not easy dealing with Charlie Chrin," said Board member Bob Doerr.

"It's much harder dealing with me," wisecracked Angle.

It is now 2017. How much money has been generated as a result of this deal?

Ken Kraft asked that question nearly two months ago. He finally got an answer of sorts at Thursday night's economic development committee meeting.

According to Department of Community and Economic Development Director Tim Herrlinger, the county has received $204,000 since 2012 from the sale of five lots. Of course, there are many more lots to be sold so I suspect that $2 million figure will be reached.

Herrlinger said his figure is "subject to audit." Translated, that means he's unsure.

Despite Angle and Stoffa patting each other on the back, it was actually a good deal for Chrin. Without county approval nothing would happen. So this deal got him the approval he wanted. Probably more Chrin's idea than anyone else's.

Actually, it was going to pass. Angle squeezed Chris to get something we need, and did not have to squeeze hard bc at heart, Chris considers himself a farmer.

With all respect, where is there a shortage of farmland ? Pennsylvania isn't exactly an unending urban jungle.

With all respect as 2:18 asks........where is there a shortage of farmland? Look no further than the front of your nose. Farmland in Northampton and Lehigh County is disappearing at an alarming rate. This open space adds to the quality of life in our County , not to mention that this land is also the finest farmland for crop production in the Country.

"With all respect, where is there a shortage of farmland ?"

Preservation of farmland is actually a matter of sustainability and national security. While most of the crop grown locally goes for demands outside the LV, we need arable land here in the LV in the event of a catastrophe to crops elsewhere.

Everything has a tipping point. Currently, we produce more food than is required, using less land to do it. There will come a day when we reach that tipping point. When our population can't be fed, or some unforeseen pestilence wipes out crops and reduces the amount of food available.

But, who in hell cares about some future generation? Our bellies are full and we want our Amazon products.

9:43. Most of the land between Allentown and Harrisburg is farmland. All you have to do is look out the window as you travel psst it on I-78.

Spending money to "preserve farmland" is a joke.

in any event where there was a crop failure that required more crops to be planted there is plenty of area ready and waiting.
"victory gardens" would work just fine.
the number of acres would eclipse your 1930 figure.
national security?
you could make the argument that recycling is a matter of "national security".
less landfill space would be needed so we could have more farmland.
so everyone can get on the lower carbon footprint track to make America great again?
the preservation game is a handout to farmers (who get plenty of support from other programs)
in effect the preservation programs are keep the status quo.
i got my semi rural home on a 2 acre lot and i do not want a development next door.
so lets get the taxpayer to fund a program so the farmer gets cash to do what he was doing anyway.--farming.
i get to keep my quiet little area and everyone else can fund it.
i have seen your articles about people trying to carve out areas to keep their mansion and restrict any development near it.
so the biggest dimension of the "preservation" deal is to benefit the existing land owners and keep their property values higher by charging everyone to do it.
why should the guy living in a city pay for that?
that guy might want to move to a less congested area in an affordable development but cannot due to "preservation" that he gets screwed into paying for?

Why preserve farmland? There's plenty of it. We overproduce crops, while the government props up prices. Farmland is extraordinarily environmentally unfriendly. We should only spend to preserve woodland. That's what these farms were before being clear-cut. This program is a wasteful and environmentally unsound scam.

Is there a written contract with Chrin guaranteeing this payout? There should be as well as who enforces it.

This is just a campaign fluff piece for Ron Angle.

So again, no benefit to the taxpayer. a Farmer or two gets a little, the developers get a little bit more and the taxpayer gets the shaft once again!
nice of our local reps only thinking of themselves as usual.