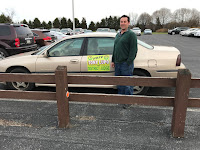 He told he has 100 yard signs and that's all he intends to get. He reported no one is messing with his signs. That's probably because no one can find them.

I believe Heather Fehnel was also at the Shit Summit, but missed her.

Good to see Mr. Lupo slid into the meeting after a day of checking Zito's signage for who paid for them.... OK.. so there were 2 turds represented at the meeting