You Can't Keep a Good Bulldog Down 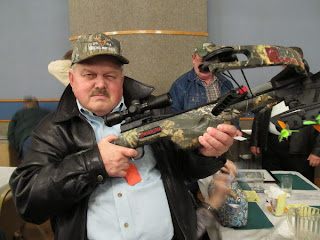 Although not widely known, Northampton County Bulldog Ron Angle has been in pretty bad health for the past three years. He's visited LV Hospital so often that I was beginning to worry he'd have to change residency. They kept sending him home, telling him it was acute food poisoning (four times) or ulcers. I discounted the ulcer diagnosis. Ron gives ulcers, he doesn't get therm. Amazingly, it took a trip to a third world country to make Ron aware he really has a problem. While visiting some remote island off the coast of South America, Ron had another attack. He spent most of his vacation in a third world hospital. His problem has finally been fixed, believe it or not, at lowly Easton Hospital.

Angle had neither food poisoning nor ulcers. He had an infected gall bladder. It was actually full of gangrene. Had he waited two days longer, he'd be dead. In fact, he told me he could feel himself slipping away.

Angle went under the knife on Wednesday and was released yesterday. I was amazed by the quality of medical care at Easton Hospital. On late Friday afternoon, for example, he was visited by five different doctors in a thirty-minute time span. Of course, he began arguing with them. On Saturday, he was doing spins around the hallways. On Sunday, he was looking over the hospital's books.

Of course he was visited by 5 doctors. Easton is a for profit hospital and each doctor has a fee with a portion going to the hospital. I was admitted to Easton on an emergency basis and asked each doctor that stopped in his name and relation to my case. I made it clear no payment was in order for useless visits and they stopped almost immediately.

Although I don't know Mr. Angle, I'm glad he is healthy again.

Thanks, Bill. He was quite ill.

Suggest his former employer of sorts, Jolly Joe, check in to EH,
Someone needs to find out what ails him. Possibly greedaphobia or analcranialitis ?

Feel better, Ron, and take heart! If it happened after October 1, you'd likely be death paneled under Obamacare. Give 'em hell Ron.

PS: Bill's correct. I told each doctor they'd have to give me at least 10 minutes of one-on-one to avoid a complaint to my insurance company about being charged for fly-by so-called visits. That's also the best way to get completely ignored, however. It's a tricky balancing act.