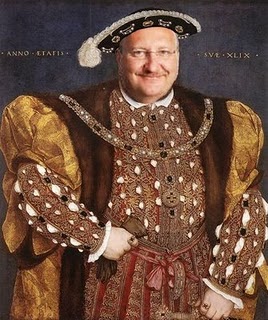 King Edwin, who is running for Pennsylvania Governor and Allentown Mayor simultaneously, has no time for something so trifling as democracy. Used to buying his elections, it's understandable that he'd be reluctant to debate Independent Mayoral candidate Michael Donovan. According to The Morning Call, King Edwin has agreed to only one debate. It's one that would be moderated by one of his biggest supporters and a regular campaign contributor.

Tony Iannelli, who hosts WFMZ-TV69's Business Matters, puts on a great show. As a debate moderator, things can get wild in races in which Tony has no real interest. He actually encourages the crowd to boo and cheer. Not having a mean bone in his body, he pitches mostly softballs. He waits for his guests to go after each other. And they do. I've done it.  Ron Angle has done it. And so has Pawlowski campaign manager Mike Fleck, in a televised debate about the NIZ.

But there's no way that Tony Iannelli can fairly moderate a Mayoral debate involving incumbent Ed Pawlowski. He even carries a laminated picture of Pawloski in his wallet.

WFMZ-TV69 has an excellent news staff. Why not ask one of them to moderate?

Allentown blogger Michael Molovinsky has noted that Pawlowski's high-handed sale of water assets, along with a goofy trash to energy plant, might have energized some citizens to look for a Mayor who at least listens to them. But he questions whether the media will give Donovan a fair shot.

Are you sure he's going to debate and not just do his trademark power point? It would be kinda funny.

Governor Ed's been a master debater with each of his erections. His hands on approach always gets him a happy ending.