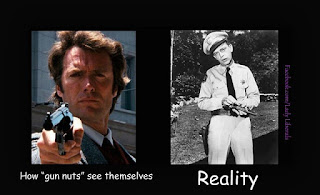 Northampton County Sheriff Randy Miller is no longer being sued over his decision to revoke a license to carry firearms. He did that in March to a person who provided false references. This suit never identifies the not-so-secret Plaintiff, but it's pretty clear that it's West Easton's Tricia Mezzacappa. When she applied for her license to carry, she listed Executive John Stoffa and South Whitehall Attorney Rick Orloski as her o references. She despises Stoffa and regularly attacks Orloski, who prosecuted my libel case against her successfully. Neither would vouch for her.

Sheriff Miller, who lacked the resources to check these references in the time under which he must issue an application, ultimately revoked someone's license to carry. Now I suppose it's possible that two people could have submitted false references, but I doubt it.

This matter was listed for argument court last week, but the case has been dropped, without prejudice, at the request of the mysterious Plaintiff.

Tricia Mezzacappa is the person who filed the dismissal in the Civil Division. So unless she picked up a new job as a paralegal, I think it's safe to conclude that Mezzacappa's license to carry firearms has been revoked.

Just as likely that her license was reinstated and that was the reason for the lawsuit no longer being pursued...

Not likely. There would have to be a court order. It was the plaintiff's request, independent of the attorney. I think that what is most likely is that Mr. Green is needed as a witness and did not appear.

Who is Mr. Green?

Do you know why this firearms case was on the Argument List? What legal issues were being argued? The plaintiff may not want her identity known but the legal issues that the court was being asked to consider shouldn't be confidential. I'm assuming she elected to withdraw her case rather than have a judge dismiss it.

The legal issue was whether thecSheriff had a legal basis to revoke a LTCF based on an application that contained two bogus references.

You know nothing! Maybe Tricia submitted a new carry request and this time didn't put down names of people who would stab her in the back. If they are good references, why would she not get a permit?

The sheriff makes that determination not you. That is a confidential determination by the way. How many sheriffs do you think will be willing to lose their jobs funneling you information. For all you know Tricia is legally carrying at this moment.

Your constant blogs about her being unarmed and helpless, may be a good reason for her to be given a permit. That as well as all the hate you have generated against this young woman.

She has a right to defend herself and that may be the reason it was dropped. You don't know everything and you don't get to make the rules you old drunk.

It was not dropped. She withdrew her appeal of the revocation. It is my understanding that a revocation is permanent, or at the least, lasts as long as the term of the LTCF.

You are wrong about the CWP. It is confidential and whoever is leaking the information to you will get fired like the last guys did. This time the Sheriff himself could end up getting fired for leaking confidential information.

Nobody ever leaked anything to me about a LTCF, except Mezzacappa herself.

In an interview with Telemundo, the president said that he had brought the gun debate about as far as he personally could after the shooting last December in Newtown, Conn. But the legislative branch is a co-equal. And if legislative items like expanded background checks on gun purchases are to pass, he said, Congress will have to take the next step.

Keep lying o'hae it go youdisbarred once this time it could get you a room alongside mr gregory....

There is no need to hide behind confidentiality. You have the right to release information about your own firearms application. Since you are a candidate for public office and an aggressive advocate of "right to know," why don't you issue a statement on your blog about the status of your LTCF? Also why don't you grant consent for the Sheriff and other county officials to speak freely about your case? Is O'Hare correct? Did you withdraw your appeal? If so, why? Did your attorney come to an agreement with the county? Did you apply for a new firearms license? Was it granted? This is not an issue of national security, and there is no reason for such secrecy from a political candidate in an election year. If O'Hare is wrong, put the proof out there.

I think that's a very fair point. If Mezzacappa stands for transparency and even the right to open carry, she should come clean with the voters and discuss her own case.

"Maybe Tricia submitted a new carry request and this time didn't put down names of people who would stab her in the back. If they are good references, why would she not get a permit?"

Because, after her LTCF was revoked, she openly carried a gun and transported it in her vehicle in defiance of the law. She was convicted of criminally harassing a government clerk. She participated, on behalf of convicted criminal Jim Gregory, in an online assault on the character of a domestic abuse victim and her mother. She lied to the court about the nature of her relationship with O'Hare in order to get two separate PFA petitions on the docket. Both were dismissed. Her ill-advised misuse of Orloski and Stoffa in her original application cannot be ignored. Her disorderly conduct conviction for threatening a government official cannot be ignored. Her fierce advocacy for accused murderer Rockne Newell in Ross Township and her scary statements about hollow point bullets cannot be ignored. This all goes to her character and reputation and should weigh heavily against her.

Is there a Legal Process that can be initiated to remove Firearm's from individual's that Pubically display aberrant behavior?

"Transparency!!" You have to be joking! You have buried the Ross Marcus-CACLV scandal so deep the Devil just found it.

You are about as transparent regarding good government as a brick wall!

"This all goes to her character and reputation and should weigh heavily against her. 11:43 AM"

You forgot to mention the 4th of July incident in Bethlehem where she said she wanted to pistol whip some guy "bloody and unrecognizable" because he questioned her right to open carry a gun.

"A license shall not be issued to...an individual whose character and reputation is such that the individual would be likely to act in a manner dangerous to public safety."