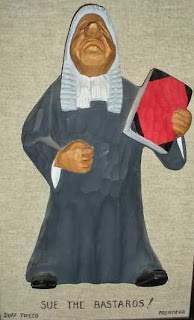 Yesterday, I told you that Northampton County Council was mulling over a resolution calling on Executive John Stoffa to sue the Lehigh Northampton Airport Authority over plans to sell Braden Airpark, located in Forks Township.

But Executive John Stoffa doesn't want to sue the bastards. He told Council he was on the phone with the bastards all afternoon, and they promised him not to sell Braden Airpark until next March. He thinks that call should be made by the next Executive.

"I don't want to sue the Airport," he told Council. "We can't afford it. We are in Court too much already."

NorCo council has a long record of wasting money in the fight to waste more money.

Was Bruce Gilbert present? Is he still being compensated? If so, what's the difference between what he's doing and stealing? Why did he start something and quit? What kind of example does this present?

He was there. Before you dump all over someone, you should know the facts.

Yo BO! On the WEF, the old girl has a long sultry entry about a pig, a bird and a con. As well as the evils of young girlfriends and mended marriages. Could be a country hit song. What a read. It also appears that the Mediterranean meatman has even posted from the state pen.

By the way, you are also mentioned as the dirty dog that you are there BO.

Yeah.. it makes sense for one Northampton County government to sue another over land. The taxpayer gets screwed again!! Once with the stupid land deal by the airport and now with litigation costs. The less land that local government has the better for the taxpayer.

It is entries like hers that will ensure Gregory does all 30 months.

YoBO! Gregory is on facebook saying that he has a hearing coming up soon. He is asking everyone to text and write letters to the court to get him released. he stated he does not belong there and has committed no crimes.

For a Mensa, he makea no sensea

Saw that on FB. he was talking to his buddy Schlener's girlfriend. That is what the word is. The guy is still in denial.

Graterford inmates have no Internet access, so it is not Gregory. It is an impersonator, most likely Tricia Mezzacappa. She might be posting what he wants out there and might be acting under his direction, but they are not from him. I do not get these messages. If you have time, please paste them here.

Lehigh Valley Rumblings is going to be making a return to compete with the premier news/political blog of the area.

The Rumblings blog was silenced because of Bernie's connections in the courthouse. Now that Jim Gregory has been captured by the corrupt NorCo justice system we will relaunch our efforts with guest bloggers who have the wits to match Boondooggle. Geeting, Mezzacappa, Holmes, will all be making contributions once we are up and running. There has to be a counter offensive to stem the tide of hate flowing from this cesspool of propaganda.

We will reach out to the usual targets of O'Hare's vitriol such as the 9-12 project, CALCV, WGPA and those in office at every level. The Lehigh ValLey Blogosphere will spasm from the shockwaves that will ensue, and your petty little blog will vanish into obscurity.

"Before you dump all over someone, you should know the facts." That's a time honored tradition on this site.
Selective targets, half truths, distortion and mean spirited attacks with no concern about real truth or the harm caused.

That is the true harm caused by your self deprecating "i am a scum bag not a journalist" shtick.

Time for your drug cocktail, Tricia.