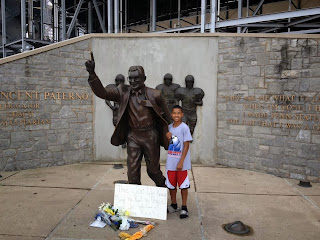 The NCAA plans to "gradually" restore football scholarships to Penn State as a result of "continued progress" made since they were cut as a result of the Jerry Sandusky scandal. But if you ask Lehigh Valley Congressman Charlie Dent, all 40 scholarships should be restored now.

Though Dent is happy to see "NCAA revisit its arbitrary and capricious punishment of innocent student athletes," he wants all scholarships restored immediately to "allow more student athletes the opportunity to graduate from a top-rated university.” He has suggested the money should come from the $60 million fine the NCAA imposed on Penn State last year.

Dent, himself a PSU graduate, is joined in calling for the restoration of all scholarships by Congressman Glenn "GT" Thompson, whose Congressional District includes Penn State. Thompson condemned the NCAA's "punitive action against innocent students," noting it "only serves to harm past, present and future academic achievers."

In the wake of these sanctions, Dent last month introduced the NCAA Accountability Act. It is designed to standardize the enforcement process and gives students more priority. A four-year scholarships will no longer be revoked if a student is injured or loses his athletic prowess.

Thompson is a co-sponsor of this legislation, which has been referred to the House Higher Education and Workforce training Committee.