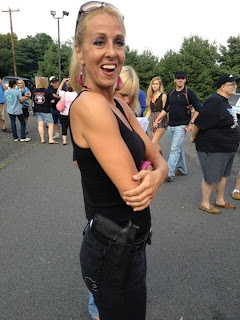 For the seventh time since last April, West Easton wing nut Tricia Mezzacappa has been unsuccessful in her attempt to obtain a Protection From Abuse Act Order (PFA) or restraining order against me. Senior Judge Lawrence Brenner denied her application after a brief hearing yesterday.

In her latest rant (you can see it here), Mezzacappa complains that I committed abuse by testifying against Jim Gregory (he's now her "significant other" and "boyfriend") and having him thrown in jail. She repeats the usual stalking and assault claims, this time stating she was "drugged and beaten, likely raped, and then subjected to further unwanted lewd and sexual contact" in August 2011.

The beating allegation is a new one. She claims I have contacted gun ranges and threatened to sue them if they allow her to patronize their establishments. That's news to me. She indicates I have told potential and current employers not to hire her. That's news to me, too. Yesterday, she noticed that ammo and personal items were missing from her house. "I know it was him," she claims.

I saw Mezzacappa, accompanied by a PFA clerk, heading to a courtroom yesterday, and immediately knew she was there to cause trouble. So I decided to go to court myself. Mezzacappa attempted to have me ejected, but learned it's not a star chamber.

She told Senior Judge Brenner that I am an ex-boyfriend, which was another revelation. After listening to her go on for a bit, Judge Benner told her he was denying her petition. She spun around and flew out of the courtroom, nearly bowling over a Deputy or two in the process.

Are you jealous of the fact that she is now Jim Greogry's girlfriend?

No Tricia. But I am puzzled. Mezzacappa railed against gregory's ex for dating a married man, calling her an adultress and other more vulgar names. Yet she now claims that Gregory is her boyfriend and significant other, which is probably news to him. What does that make her?

Hands of Tricia. Jimbo may be gone but is not forgotten. He is my pen pal and we discuss my groovy Cali good looks and his dark Mediterranean features. You are never part of the conversation. One day we hope to reunite in hos pad in Bethlehem and live our dream.

Bernie, she claims "to have had sex with you or an intimate relationship with her in the past". Why you sly dog you. Now she claims that Gregory is her boyfriend and you singlehandedly put him in prison. She doesn't get it. It was Jim's own words that put him in prison. His commentary from his radio show was read into the record in front of Judge Zito and even his own lawyer couldn't defend against the transcribed testimony. All of Jim's prison problems are brought upon himself because he (and no one else) violated a court ordered directive to have no contact "in any way" with his ex. He and mezzacappa both brought this upon themselves.

next time you're stealing ammo, i'm low on 45 acp

Tricia is a Menace to Society.

Bernie, you just need to change your name to Willlllbbbbuuurrrrr and she will be your loyal friend for life.

Since lesbian's like penut butter & puppy dog's, ya think Earl gets Trish off with a rout of his snout?

Bernie, Why do you put up with Mezzacappa's nonsense? You should petition Judge Beltrami for sanctions since Mezzacappa is doing an obvious end run around his previous order that banned her from further pro se filings. I recall Judge Beltrami said in his written opinion that you two were not intimate partners so the PFA law did not apply. Doesn't contempt of court apply here?

This woman cannot admit defeat. She is a nobody who desperately thinks she is somebody with power and influence. Perhaps she could have made something of herself but this wasted taxpayer funded drama and her obsession with carrying a firearm have ruined any chance of that ever happening.

In 1980, the Pennsylvania legislature enacted what is commonly known as the Dragonetti Act. The primary provision of the Act, entitled “Wrongful Use of Civil Proceedings”, is codified at 42 Pa.C.S.A. § 8351(a) and reads as follows:

A person who takes part in the procurement, initiation or continuation of civil proceedings against another is subject to liability to the other for wrongful use of civil proceedings [if]:
1.He acts in a grossly negligent manner or without probable cause and primarily for a purpose other than that of securing the proper discovery, joinder of parties or adjudication of the claim in which the proceedings are based; and
2.The proceedings have terminated in favor of the person against whom they are brought.

The Act also provides, at § 8351(b) that the arrest or seizure of the personal property of the Plaintiff is not required in order to bring an action under the Act.

She is referring to Angle,who does collect guns, but does not have 500 of them. She has no idea what he has, but thinks nothing of making statements like this in court documents.

Jim Gregory is her boyfriend? Now we know the motivation for Tricia's vicious blog assault on the character of Jim's ex. Nurse Ratched is jealous of her younger and prettier rival. Trish is Cuckoo for Jimbo, but he's in prison and its all Bernie's fault.

Hopefully now that he is in state prison he is recognizing that his behavior got him there and that it is up to him to get the help he needs. If he continues to be involved with WEFP I doubt that is even a remote possibility. I am very happy that the victims of his abuse no longer have to worry about his coming around them or polluting the airwaves with his insane rants. No one ever should have been subjected to what he put them through.

Please don't mention Jimbo Gregory, Donald will get mad. He is a dear, dear friend and hates Spartacus Maximus.

Next will be her house.

Pathetic BO! How many times has she filed sh*t and how much has it costs us taxpayers??

A word of advice for Tricia: Get a job. You have way too much time on your hands. I hear Macy's is hiring.

I think lots of people have too much time on their hands!!

Hang in there Tricia. The new county council will have real second amendment believers on it.