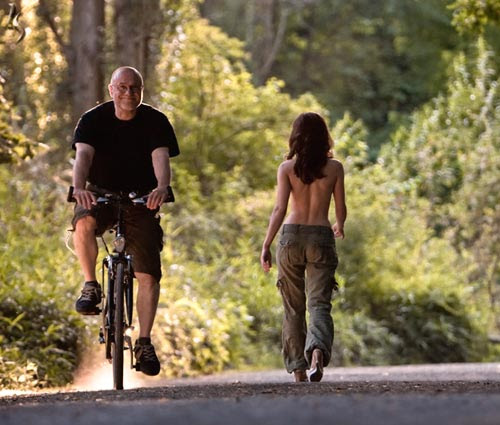 Thanks in part to the funding provided by John Stoffa's half mill tax hike in 2007, Northampton County open space program has taken off. In addition to park repairs and purchases of environmentally sensitive land, the County has preserved 12,713 acres on 130 protected farms. It is currently processing 26 applications. much more than the three or four that used to be the standard.  But Open Space Administrator Maria Bentzoni told Northampton County Council on Thursday night that it's time to tweak the County's 11 year-old plan. She still wants to preserve 25% of the County's farmland, but also wants to focus more on urban cores. She's also like to do something about expanding and linking trails. And guess what? We have those dirty gas drillers to thank. The money for these trail projects would come from Marcellus Shale impact fees paid in other counties.

Did you know that the environmental impact of the D&L trail, which extends along the Lehigh River from Allentown to Easton, is $834,093? Or that trails are responsible for 768,000 jobs nationwide? Those are points made by Bentzoni's staff. So part of the tweaked plan, could include filling gaps on these six trails:

* D&L Trail in Northampton and N. Catty - This is a 200' obstruction caused by a bridge and sewer line.

* South Bethlehem Greenway to Saucon Rail Trail. - This is a 0.9 mile gap. This would enable someone to travel from South Bethlehem to DeSales University, without seeing a car.

*Tatamy Rail Trail to Plainfield Bike Path - 3.7 mile gap. This could hook the Slate Belt to other paths throughout the Lehigh Valley.

Solicitor Phil Lauer is a bit put out that there are more trail jobs than lawyers, so he's probably gonna' sue someone this week.
Posted by Bernie O'Hare at 9/23/2013 12:00:00 AM

I Love the trail idea. The problem is security. The little thugs also walk those trails looking for easy targets. We need more camera's and better security for bikers and hikers. In the meantime, carry.

Hey Bernie,, Is that chick toppless????

" Love the trail idea. The problem is security. The little thugs also walk those trails looking for easy targets. We need more camera's and better security for bikers and hikers. In the meantime, carry."

Are you nutz? I've been on trails for years and the only times I ever felt threatened were the two times that Mezzacappa decided to show up and lie down right smack in the middle of the bike path.

While i would not recommend a woman to use the trail alone, I think it is probably less dangerous than walking on the street.

"Hey Bernie,, Is that chick toppless???"

Will the property owner's whom refuse to sell easement's be Eminent Domained?

If you have to Fear for your safety, walking around in Public; then the District Attorney has Failed you!

10:01, Before anything like this kind of plan is decided, there will be public meetings. I certainly do not favor the use of eminent domain for a walking trail, and doubt that would go over well.

What about investment in our current trail system? The D&L trail head in Cementon is under fit and many people park on private property across the highway. This has become a very popular section of the trail. Hopefully someone is looking into future improvements in conjunction with the replacement of the Cementon bridge on PA329. Hopefully a wider sidewalk is being proposed for the new bridge to accomodate two-way pedestrian traffic (foot/bike) between the northern DL extension in Cement on to the southern extension in Northampton. Also the crossing at PennDOTs PA329 is poorly labeled and a real challenge with all the traffic.

Those are good suggestions and precisely the kind if input that is being sought. Based on what I heard, that would be covered by the Marcellus Shale funding.

Allentown has a good foot forward on proposed enhancements for the Jordon green way. City connections are important, however, I do think each project should have merit and stand on its own. There are many areas in City, Townships and Boroughs where pedestrians walk along or in busy roads. We need to consider investing in existing pedestrian corridors that are unsafe.

FRACKING WASTEWATER Portage PA -- Studies from the U.S. Geological Survey, Penn State University and environmental groups all found that waste from fracking can be radioactive - and in some cases, highly radioactive.

We are polluting ourselves, thus ensureing a robust Health Care Industry, in the future.

Thanks 551. I have seen this bridge up close and it has diagonal crack across the deck the entire length. Not surprising they would restrict truck traffic. This will hurt the cement industry.

That would really do some good. I love some good hiking and walking along trails makes me think about life.