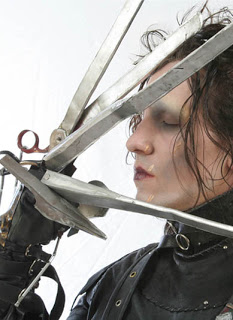 Spring 2007. Easton Attorney Brian Monahan, running for District Judge, is unfairly and maliciously tarnished as an unethical lawyer who obstructed justice. In anonymous mailers, he's falsely accused of preventing "the prosecution of a heinous double murder." But it was not his opposing candidates who attacked him. It was political consultant Tom Severson, whose real problem with Monahan was that he was too good a lawyer, and one who dared beat him in a disturbing unemployment compensation case that exposed Severson's bizarre knife fetish. It made no difference to Severson that Monahan was, like him a Republican. It made no difference to Severson that Monahan, unlike him, did most of his political lawyering pro bono. Yesterday, thanks to a decision by a seven-judge Commonwealth Court panel, Severson lost his bid for $1.2 million in political consulting work from the State Senate GOP, after they stopped using him. The Court cites sovereign immunity. But Severson did it to himself.

Not too long after the Monahan smear, in December of that year, Severson disrupted a funeral mass at which the Council member Ron Angle was one of the congregants. Spying Angle, Severson stood up and went to work. "Fuck you!," he shouted in the middle of a Catholic church, "I'm going to kick your ass in the parking lot." He gave Angle the second finger salute and threatened an eighty year-old gentleman who asked him to knock it off.

After the funeral mass, Scissorhands Severson did tear off after Angle, but Ron was in his big-ass truck, waving good-bye as Severson chased after him like a barking dog.

That's when the state Attorney General started paying attention to Severson. Not only was the consultant prosecuted and convicted over the funeral fracas, but his dirty campaign tactics came under scrutiny. The King of Sleazeball Politics was charged and copped a plea to deceptive campaign finance reports.

That ended his career, although his name popped up recently in the Bob Donchez Mayoral race.

Severson's sleazy tactics ended up costing him his job with the state GOP caucus.

Angle did run like a coward. He loves to agitate but runs when confronted on his BS.

Haters like you will embrace the devil if he is against Angle.

Bernie has it out for Tom because he spent his time in military service hunting down enemy combatants while O'Hare spent his wolfing down MRE's and cleaning latrines.

Tom Severson was in the shit and Bernie knows it, which explains a lot of his erratic behavior. Nowadays they would chalk it up to PTSD but for a gnarled old Vietnam Vet there is no such luxury. Where were you O'Hare when the VietCong laid siege to Khe Sanh, or when they were sniping 19 year olds from spider holes? Tom Severson was there, and he has more confirmed kills than John Rambo.

Bernie, I would have to say ,that Tom was always nice to me years ago . He lived on college hill at the time.I might add that extraneous combat duty does change the view point of many vets. Picture this, you are a guy like Tom ,and some political adversary that lived at home with his parents until he was 26 years old, look'n at himself in the mirror every morning ,CHALLENGES this combat vet that OUR Government sent into un- supported conditions ,what does he think > SCREW YOU ,come get me you ass holes. Now I know Brian well enough to say he did not deserve ANY derogatorily statements about his fine reputation. What do we do?

Tom was fighting for our country while Angle, Stoffa andO'Hare were guarding the cigarettes at the local stateside PX.

Why do you think the county "bulldog" ran like a rabbit when finally confronted over his crap.

I give Severson credit as a combat vet, but that does not excuse moronic behavior. It only explains it. Incidentally, Stoffa, Angle and I all served. It is true I never spent a day in combat, but I tried.