Is Pawlowski Running For Mayor ... Or Governor? 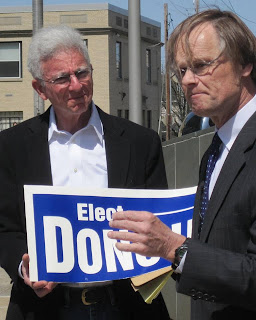 "Mayor Ed Pawlowski is abandoning the city of Allentown,” Donovan bluntly states. "Mayor Pawlowski has proven time and again that his administration was run not as a City Without Limits, but as a City Without Choice. He pushed the water lease through without choice, he pushed the incinerator deal through without choice, and when the people tried to speak against his decisions he shut them down and gave them no choice. He has ignored requests for input on the NIZ development. It is not just my prerogative as a candidate to give that choice back, but my obligation to this city and its people.”

Donovan, a former City Council member, is a professor of business and economics at Cedar Crest College and a former city councilman where he served as Vice President for 2 years and chaired the Budget and Finance Committee. He has almost 40 years of experience in urban affairs through his work in business, education, and public policy.

He'd have good chance of winning if Allentown were a democracy. But it's not. It's an urban growth regime that eats up good people like Donovan.

He has as much a chance as Jim Gregory in Bethlehem.

If Pawlowski wants to be Governor, Allentown voters should give him the chance to pursue that goal full time, and not on the taxpayers' dime.

Best of luck to Michael Donovan.

Donovan is a disgruntled weirdo. Pawlowski is his Moby Dick.

Little Lord Fauntleroy will huff and puff but the pusillanimous nature of his character will prevent him from overpowering Pawlowski.

The above comment is from the Blog Mentor, who is so marginalized and ignored that he's reduced to snide anonymous shots. Nobody cares what you think, and the last think Pawlowski would want is your support. You are poison, and have more enemies than Assad.

Vote Mezzacappa for WE council or see your taxes continue to go sky high.

Donovan is just too bizarre for words. Pawlowski is far from perfect but he has made Allentown the place to live and invest, much to Callahan's chagrin. Give him his due. He works tirelessly and promotes the city, but unlike Daddona, people take him seriously as they should.

All Pawlowski has done is increase the class division that already exits, while discouraging the democratic process at every turn. I expect to see him elected in Allentown, where democracy is dead, and defeated everywhere else, where it is not.

Comments from the Blog Mentor are unwelcome here.

Class division? What the hell are you talking about? Bringing decent jobs to downtown Allentown? Tossing out pawn shops, tattoo parlors and urban outfitters? How many of those sleazy businesses are in your precious Nazareth? What a hypocrite you are.

There is a tattoo parlor just a few doors from my apartment. We have many small and struggling business, and nobody tries to shoo them away like Pawlowski does. You appear to have captured the classism you pretend doesn't exist very well. I have condemned Pawlowski and his classism since the bus stop changes. It is years ago when pawlowski sicced his code people on some poor old lady doing a yard sale. He is a phony who cares about nobody except those who give him money. He will lose statewide, and should lose.

Pawloski has absolutely destroyed allentown. First as CD director for his mentor Afflerbach, and now as mayor. Yes there will be an arena and a few new buildings at 7th and Ham., but the neighborhoods, where people actually live, have been destroyed. The city run recreation programs have been destroyed, putting more kids into the hands of the gangs. People are afraid to leave their homes after dark. It is a dump, and if you think the arena will salvage the city you are clueless. Those with a brain understand this and have already moved out.

It should be the greatest City in Pa.

Bruce Villanche said...
This comment has been removed by a blog administrator.
September 6, 2013 at 10:56 PM

Periodically, the Blog Mentor will drop by to bash Donovan, who is on his enemy list. Then he will resume rolling on the floor and foaming at the mouth.

Sorry if this is out of topic. I read the blog every so often and I just want to know who is this blog mentor you mention from time to time.

He must be running for something. He asks for money every 15 minutes.

The Blog Mentor is a sick man who has a hate list of at least 60 people. Donovan is on it. I will not name him. Over time, he has marginalized himself to such an extent that he is treated like poison by everyone. He will come back here several times, under numerous assumed names, to attack Donovan. I will delete them.

Who is the guy next to him?

Ed has won power by hood winking and corrupting the people of Allentown. That modus operandi won't wash state wide. As much as we might pray for relief from Ed this won't provide it.

Allentown City Council should pass a "resign to run" law, applicable for anything other than running for another city office.

There's simply no way Pawlowski can fairly represent the people of Allentown while running for state-wide office. He'd just be stealing money from the taxpayers.

Corbett's people must be ecstatic. There's going to be someone in the race that they can crush!

Accoring to the papers, in a poll in which 87% "stated they hadn't heard enough about him to form an opinion" Pawlowski still "would defeat...Gov. Tom Corbett 44% to 38% in a head-to-head matchup."

Pretty much "anybody-but-Corbett" could win if the election were today. The election will be the Democratic candidate's to lose, but I don't think Ed P should get his hopes too high that it will be his to lose.

Lighthouse, While Corbett might be vulnerable, Pawlowski is the one candidate he could easily beat. I doubt Pawlowski could even win in the LV.

The polls on Corbett are almost meaningless right now. Only the wonks and special interests are paying attention. Until the race begins and Corbett is stacked against real challengers one should take these polls with a grain of salt.
By the way, does anyone really think Ed has the presence/appearance/charisma... to attract and statewide following? Am I missing something?

"By the way, does anyone really think Ed has the presence/appearance/charisma... to attract and statewide following? Am I missing something?"

Scott, don't get me started...

Either way, I believe Allentown is in a bubble. We have been insulated for so long from reality when it come to metropolitan living and "real" competition when it comes to events, lifestyle, and, yes, politics, that once we go out into the "real" world, I believe many are in for a rude awakening. I love Allentown, but hate that people are walking around with delusions of grandeur.....

I think we can combine 2 of the general threads in this comment section...

1.) Pawlowski will never be PA's next governor

Bernie ,Salvatore J.Panto Jr. should run for Governor . He could use his model for downtown Easton tonight! Wonderful time for many people.225 people in circle for dinner?YES and great 60 and 60's music. The place was just so much fun with all the nice people in the circle, all the restaurants had families and friends together. My wife Peg and I ran into lots of old acquaintances, it was great, Art show from Kim Roberson at Connexions, City was A-! tonight.

Peter, I'd love to see Sal run for Governor, but he loves Easton too much. We couldn't even persuade him to run for Exec.

He seemed to organize a pretty successful business, while you are only good for anonymous pot shots.

The blog mentor will provide the momentum needed to put Palumpa in harrisburg, he is a king maker. Look at Alfundo Toad's failed bid for council, it was a direct result of the mentor's efforts.

Can't run for Governor if he loses the Mayor's election. Unless he thinks like Rick Santorum who loses his Senate seat and runs for President. Come to think of it, Pawlowski does think like Santorum!

Fleck hustles another dumb a** politician into thinking he can be "the Man"!

Panto can win in his little fish bowl of Easton. He should stay there. Just like the late Bob Freeman, once these little fish leave their little bowls, they get creamed by the big fish.

Sal is an Easton guy and that is about it. Besides his record of fees and taxes would sink him outside of Easton.

Ed ought to read "The Peter Principle." He has reached his high water mark as a politician. He has the charisma of a toad. Looks like Danny Davito as "the Penguin." Contributions to his hopeless governor bid are a true waste of money.

I'm sure Pawlowski is looking to use his run as an opportunity to raise his profile among the real contenders. I'm sure he'd like someone to promise him a cabinet position as a way to get out of Dodge before his house of cards starts collapsing.

I thought it was very ironic that he took Corbett to task when Allentown has been one of the largest recipient of municipal welfare from the state over the last few years.

He's planning a formal announcement Monday morning in the city.

Better a Gov from Allentown than some rube from Western PA.

There is a tattoo parlor just a few doors from my apartment. We have many small and struggling business, and nobody tries to shoo them away like Pawlowski does. You appear to have captured the classism you pretend doesn't exist very well. I have condemned Pawlowski and his classism since the bus stop changes. It is years ago when pawlowski sicced his code people on some poor old lady doing a yard sale. He is a phony who cares about nobody except those who give him money. He will lose statewide, and should lose.

After all these years, all you have is bus stops and the yard sale lady? Too funny.

The bus stops are what made me realize pawlowski is a phony. That is the first of many, many problems with this corrupt Mayor, whose many problems I have detailed on this blog over may years. But don't worry. Now that he is announcing for Governor, I will ensure that the word gets out about him.

"Better a Gov from Allentown than some rube from Western PA."

Better a rube from Western Pa than a community organizer from Chicago. That's where Pawlowski should return.

So who's the front runner? Allyson Shwartz?

She would be the most well known and would easily defeat Pawlowski. But I think more candidates, including jack Wagner, will emerge. I would support him. I will not support Pawlowski.

Can someone please tell me this.....why is it a person can take home hard earned taxpayer salary and not work for it? Imo this guy is stealing and should be thrown in jail.....so he can campiagn on the taxpayers dime and nobody has a problem with this? Why is it just because you gey elected, you don't have to follow the rules?? I can't just leave work to campiagn, why should he or any other elected official? Voters should be furious that guys like this make in excess of 100 thousand dollars and don't have to work??