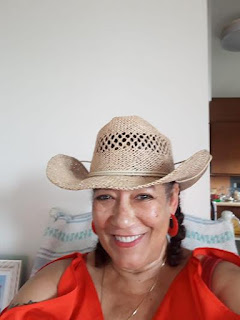 A woman upset at the prospect of being sent to jail decided to take matters into her own hands in a magisterial district judge's courtroom this morning. Sonsorrae Barrett, age 59, was before Magisterial District Judge Robert Hawke for a preliminary hearing on charges of aggravated assault by vehicle while driving under the influence. What she took into her hands was either a steak or a paring knife, which she had stashed into her bra. She plunged this knife into her sternum, twice, when Magisterial District Judge increased her bail from $25,000 (10%) to $75,000 (10%).

Barrett has been charged by Lehigh Tp police after an October 27 one-car accident along Lehigh Drive. Tow passengers who were in the car with her were injured.

She was in court to waive her preliminary hearing, which essentially is an admission that there is sufficient evidence to send the matter to court. Pretrial services recommended an increase in bail because she had violated bail conditions by testing positive for alcohol.

Barrett was rendered emergency treatment by officers, constables and Judge Hawke. She was taken to Lehigh Valley Hospital, where she is expected to recover from her injuries.

Court sources inform that Barrett may at this point be committed for a mental health evaluation.

District Attorney Terry Houck is also investigating whether Barrett should be charged with bringing a weapon into the courtroom.

I guess that she could have easily brought in a gun?

It is obvious that she needs help!

Poor lady , she’s obviously distraught. This is too bad . Her family needs to heal her. Geez.🙏

So Sad! God Bless Her

Atta boy Terry! You want a step stool for that slam dunk?

Mezzacappa, the case against you is the real slam dunk.

Speaking of Mezzacappa, wasn't she supposed to have a trial recently? May I assume that it was continued again?

Great job by Judge Hawke. Also would like to say that Constables get banged on constantly, and sometimes for good reason, but it appears they did a great job here!

Perfect example why the Sheriff's should replace these constables just like Lehigh County did.

I agree the constables are not trained well and it shows.