Bethlehem's City Bird? How About a Vulture? 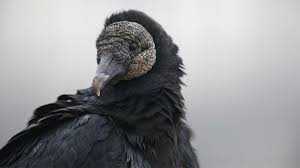 Bethlehem is obsessing lately on naming the chimney swift as the official city bird. Gadfly has several thousand posts on the topic. If the Christmas City wanted to be honest, its city bird would be a vulture. Bethlehem thought nothing of raising taxes in the middle of a pandemic. It hired the wife of one cabinet official to be another cabinet official, and then gave her a sweet raise. And it eliminated four firefighter positions.

Bethlehem has been picking at the carcass of its citizens for years, so a vulture is the obvious choice.

Not a turkey vulture. It has to be a black vulture. Bethlehem is very woke, you know.

After the two politically ambitious pretty boy Mayors, the city was in trouble. Only the casino cash helped. Now that is little help. Bob D is a nice guy and well meaning but another teacher trying to run a city. Next we will get Willie another teacher with no management experience.

Bethlehem is use to taxes. The School and the City pound them, yet they continue to elect the same types over and over. So there you go.

MugWump would be ideal choice. Def: a fence sitter who has Mug on one side, Wump on the other.

Let's hope that when the new mayor is in office, he'll bring in his own finance & recreation department heads!

That is a fine likeness to many a political parasites that have run the community into the ground.

They are so woke it is a wonder they don't fall over with their smugness and "we know better than you". A bunch of "let them eat cake" parasites. Guess when your experience is teaching young kids you actually think you know a lot about everything. Please teachers, do the world a favor and focus on helping the kids. Many of the kids are struggling with basic concepts.

Our budget was made up by a group of dept. heads who are not residence of the city. Why should they care how high the taxes go, they don’t have to pay one penny of the taxes including the city wage tax of one percent, their one percent goes to the municipality in which they live. Wake up council I realize you are only part time people and many of the numbers they put before you are believable but not true.

I'm not sure about this Dana Grub guy, but Reynolds will be even worse than Donchez. Donchez just wanted to add Mayor to his life long resume but never really worked that hard. The guy was never seen anywhere in the City! Reynolds voted to get rid of the Firemen and has voted for every proposed tax increase since he has been on Council.
Bethlehem better wake up quickly.

Raising taxes in the middle of this pandemic is just crazy. Who ever voted for it should be voted out of office.