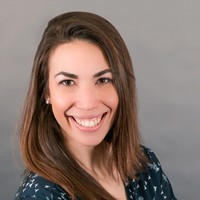 When he was District Attorney, John Morganelli did a very effective job of handling the press himself. He enjoyed it, too. He'd walk into a room and saying, "The press is here. Hide everything!" Or "I'd like to thank members of the press for coming. You, too, Bernie." Terry Houck, who has succeeded John as DA, is much kinder to me. But like most of the busier District Attorneys, he's decided he needs a point person to deal with us. This is actually a wise decision. Prosecutors are often accused, sometimes rightly, of  poisoning potential juries with inflammatory statements. A professional spokesperson can prevent that from happening.
DA Hock has hired Davin Jurgensen as his spokesperson. A graduate of Rowan University (2015), Jurgensen has worked as a freelancer and reporter at The Evening Sun. Since 2017, she's been employed as a web producer and assignment editor at WFMZ-TV69.  As a producer, she'd write 15-20 short stories every day, which is excellent training for her current role.
Posted by Bernie O'Hare at 2/05/2021 12:00:00 AM

Isn't this the position that McClure and a few council people were trying to stop?

Wasteful and unnecessary. John M did just fine - and he never let bad cops slide, like Terry and SBRPD. Terry should grow a pair and use his English words slowly and carefully. Isn't he a lawyer, for God's sake? Although, McClure's a lawyer who let's Bernie do his talking for him. I smell a pattern.

4:51, some council members were hesitant, but relented. The DA is an independently elected official and neither council nor McClure can prevent him from running his office as he sees fit. Frankly, I think it’s a good idea for the reasons I stated.

I will disagree, Bernie, that the DA’s office needs a “point person” to deal with the media. This is just another way an elected official can hide and not face the tough questions that are sometimes (well, rarely) asked. The spokesperson will be well-rehearsed and only offer the limited information she is allowed, whereas a trained reporter (there are a couple left in the LV) may be able to get the DA to budge or stop stonewalling. The more obstacles between the people and the person elected, the more cause for cynicism in local government.

Then go to law school, get a degree and run against him. He is an independently elected official and he decides what he needs, not you.

Incidentally you have no idea what you are talking about. The DA still faces questions, and in my experience, some have been very tough.