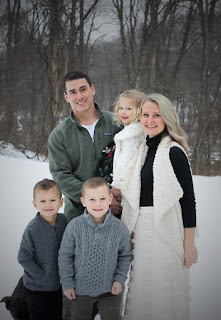 A second slate belt resident is running for Northampton County Council. John P Goffredo, 33, of Washington Township, a businessman in Nu Cor Management, has announced his candidacy. He is a Republican.

His decision to run follows a "a tumultuous year" that completely disregarded the "hallmarks of American life: freedom, liberty, and the right to work. Mandatory lockdowns, indiscriminate and illogical regulations have hurt county residents in an unimaginable way."

He adds that his generation is unrepresented on County Council. .

He's a lifelong resident of the the Slate Belt. John who attended attended elementary school at Our Lady of Mount Carmel and graduated from Pius X High School.

Unlike many politicians whose volunteerism consists of working on political campaigns, Goffredo spends free time working on community organizations like the Columbia Fire Co. in Roseto;  Bangor Jr. Wrestling Club; Our Lady of Mount Carmel Parish;  and as a founding board member of the Lehigh Valley Wrestlers in Business Network.

John is married and has three children.

Great just what they need another know nothing Seth Vaughn.

Looks like a good man with a wonderful family. But haters just have to hate.

Get used to it. Thin skin is not helpful in politics

I didn't used to think this way, but I see anyone's decision to run for office as a serious character flaw. Nowadays, who in their right mind would desire to be a politician? The answer is, nobody in their right mind. Just look at those who currently serve.

Do any of theses people even now what County government does? The party of Trump would benefit from a Civics course.

Riding his fathers coattails..lots of money and no political service or attendance at meetings. Dad is a do nothing council member in Bangor boro. The name will garner votes in that region but little else. Regurgitating trumpism's mantra already. He and Lynch cut from same mold.

Good for this man. The new man and woman you reported on. They are a breath of fresh air. Hopefully thy are an alternative to the crazy Zirinski for the county. This Zirinski woman is a self-absorbed whacko that represents the Dems's. As long as they run Zirinski candidates they will lose in the general election. She ha seven said she is running for the state house, so why run for this if you don't care?

Bernie did any other Dems block you?

I have been blocked by both Democrats and Republicans, lol.

Have any other elected officials blocked you besides Zirinski? Most people can take it in stride.

Yes. I have been blocked by several politicians on both sides of the political spectrum.