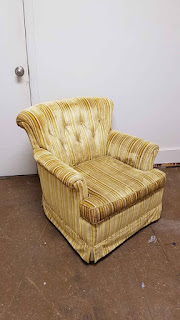 Over the weekend, Allentown activist James Whitney invited me to join a buy and sell Facebook group in Allentown. I do happen to be in the market for high-voltage fencing to surround my underground lair, so I decided to join. Lo and behold, I found this listing from Whitney himself:

Whitney: Susan Wild's successful congressional campaign rented out our storefront as their headquarters. When Susan Wild won, she was so elated that she completely forgot to come get her ugly chair. Multiple attempts to return her ugly chair to her failed, so its rightfully mine to sell now. I can't remember if this ugly chair belonged to Susan herself, or her dad. I think it was her dad's chair. So if you have a daughter you might want to sit in this chair and daydream about all the things your little girl might accomplish one day. And with this very ugly, but very lucky chair, there's no telling what she'll accomplish. I'm not saying she'll be President one day, but if she doesn't at least get elected as a State Rep, I'll give you your money back. Oh also I think famous comedian Abbi Jacobson from the hit show "Broad City" on Comedy Central might have sat in this chair when she visited for a rally. So if your daughter doesn't have political ambitions, but seems like she might have a decent sense of humor, you may still want to consider this chair. All offers will be considered. All proceeds will go to supporting Allentown restaurants.

Whitney's offering resulted in numerous comments. Some are amusing. Others are a bit nasty. One is from Wild herself: "Lol. In defense of my dad, it wasn’t his chair. He had bad taste, but not THAT bad! It was old hotel furniture that was donated, I think. Sorry we never picked it up! I didn’t realize. Hope you get your price!"

Last time I checked in, Whitney was trying to sell it to Allentown mayoral candidate Matt Tuerk.

That hideous chair may next grace someone's low rent housing, or the dump. It's a toss up.

Probably covered in #3. Get a black light.

Damm I can smell the fart she left just from the picture and there trying to sell something they couldn't give away.

All proceeds go to support downtown Allentown restaurants. And even if I weren’t on a diet, I would still promise to not feed myself with any of the proceeds.

But of course, I am on a diet. One day I saw a picture of Bernie O’hare and realized that between the two of us, he had the superior physique. That was my rock bottom moment. Seriously though, Bernie, your transformation is so inspiring. Thank you! I feel better than I have in a few years now.

Lol. Thanks James. I could gain it all back in three days. Story of my life. But I feel good when I eat right and exercise.

She should be sent a bill for leaving her trash, disgusting.