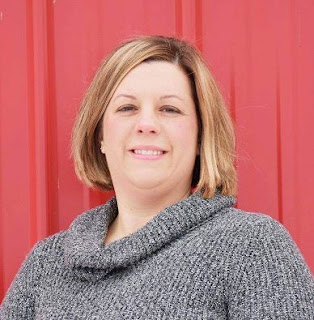 An honest-to-goodness farmer's daughter is running for one of five Northampton County Council at-large seats this year. Kristin Lorah Soldridge, a lifelong county resident who was raised on the Lorah farm in Lehigh Tp, has announced her candidacy for the GOP nomination.

Soldridge, who refers to herself as a "genuine outsider," said she was inspired to run by the "recent excitement of the Presidential  campaign." She notes the current "lopsided one-party control of every facet of government in Northampton County, and states she "wants to promote more open, plain-talk conversation between elected official and citizens."

She notes she is married, has two "beautiful children" and attends Bethany Wesleyan Church in Cherryville.

She previously served on the Lehigh Township Zoning board and has been a soccer coach in the community.

I am unaware of her educational background.

She also states she has seen the "trials and tribulations" her family has faced as a result of "excessive local government restrictions." She fails to mention what these are. Perhaps she refers to state and federal regulations. I call them protections. Those who take issue with these protections need only look at their absence has done to ordinary citizens in Texas.

In addition to this announcement, I watched Northampton County Council hopefuls speak before LVAll (who agree with them) last week.  Their strategy is to paint the GOP candidates as Trump extremists. They may be off about Goffredo and Robertone, but I suspect that Soldridge falls in that category.

Actually Bruno is a dead center Democrat. She ran the DA's campaign and was a supporter of Biden in the primary.

Some of the protections relative to Texas and surrounding states have to do with power companies' inability to recoup increased gas prices through rate increases when demand skyrockets. Power companies chose to turn off the power through rolling blackouts on their grid in states as far away as Kansas and Missouri. It seems the wild stallion free market of a fungible commodity (natural gas) ran smack into the wall of controlled rates and public utility commissions in the heavily regulated electricity distribution business. The logical solution is some middle ground. But we're not logical and the tribes have taken opposite corners and are waiting for the bell.

This one is a "Trumper". Lee Snover found her. Here she is on an interview with Snovers brother in like Georgia or somewhere. She says she is a "Patriot". She ends up dead last in voting.

Forgot to attach the link:

Painting a Republican candidate as a Trump-ist will be in every Democrat's playbook for the next decade. Whether the Republican is qualified, reasonable, moderate or not, they will be tarred and feathered as a MAGA wingnut for the entire campaign and it will work in suburbs and battleground areas.

Republicans had their villain/boogeyman for 20 years with Hillary and to some extent still do with Pelosi, Schumer, and AOC. Democrats will now turn the tables and utilize Trump, Cruz, Hawley, Gaetz, Majorie Taylor Green and Lauren Boebert as examples of what is the core belief of every Republican

"She also states she has seen the 'trials and tribulations' her family has faced as a result of 'excessive local government restrictions.' She fails to mention what these are. Perhaps she refers to state and federal regulations. I call them protections. Those who take issue with these protections need only look at their absence has done to ordinary citizens in Texas.

Very convenient. You certainly don't say that when you think you know better than the government about COVID regulations.

Heard her speak. She is reasonable and rational. If her claiming to be a "patriot" is a red flag for you, I think you might be the one with unreasonable views. Being a patriot or showing pride in the country, state, or county in which you reside in is not a bad thing. Thinking it is a bad thing, is a bad thing.

Excess local government regulations? Lehigh Township is a right leaning township so any regulation would have been passed by those with similar political ideals. Expect a tremendous amount of political activity from the Northwest tier in this cycle.

@11:18 - Sadly too many "bad people" have sort of co-opted the term "Patriot" to the point where its becoming associated with whiny over weight Caucasians who blame all their problems on other people.

Being patriotic in thoughts and deeds is always a good thing and frankly just assumed for every American living in the country.

Saying/declaring it out loud is sort of pointless, cheapens the meaning and infers that others are less patriotic if they don't subscribe to your version/definition of the word.

They all sound like Trump-lite- No thanks! not in local government.

"Patriot" now is a code word used by the far right. They like it because (1) if the listener is in on it, then you're known to be a member of the club and (2) if you're not, then you're just claiming to be patriotic.

Or you are just a patriot who loves America and what it stands for.

Will any Republican risk being censured by not voting the party line? After all they didnt send them there to do the right thing and vote their conscience, or whatever.

You're a real comedian, aren't you? Biden dead center? He fell all over himself kowtowing to the leftist whackos, and now that he's in, he's making their every wish come true.

I watched the link that 8:29/8:30 posted. While I probably would agree with her on many things if we sat down and chatted, the whole Trumpist CULTure of this program turns me off. From the duct tape over Pence's name on the campaign sign behind Mr. Pritchard (which intentional or not suggests he supports the "hang Mike Pence" chants during the Jan 6 "event", or at least the "spirit" of that "disappointment", and by her being on the show she must support as well) and her inspiration being the misinformation of the past election, is all a "no" for reasonable center-right folks. So, our polarized politics is reaching down to (as the host advocated) local elections. Former GOP may be somewhat "homeless" but in the bigger picture I predict Trumpist GOP will do quite well in the short run, while killing the party in the long run... win the battles, lose the war, and our local Generals are leading the way.

I watched the link and cannot believe that anyone with those views would have a chance being elected in this area. You get the government you deserve. Nothing here for my vote.

I've known Hristen since she was 16 years old, and saw her everyday. She has never exhibited the moral problems that most politicians have.
Having an honest person that actually listens to others without prejudice will be a welcome addition to NorCo council, and the better that she attends Bethany Wesleyan.