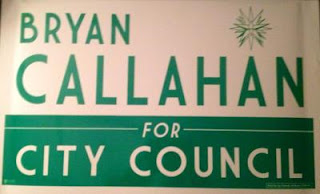 From Bryan Callahan: - There has been much speculation about my running for Mayor of Bethlehem.  Over the last year I’ve met with many residents, homeowners, business owners and union leaders who have encouraged me to run for Mayor. However, the time for me to run for Mayor is not right.

As many of you know, I lost my beautiful wife Lucia to cancer 14 years ago. Our kids were 12 and 9 at the time, so my first and foremost obligation is to my two kids.  I am a fulltime veteran educator in the Bethlehem Area School District at Northeast Middle School. I love teaching the students of our City and I believe I’ve made a real difference in the lives of many of them.  I have also owned and operated a very successful small business for the past 12 years and just opened a new brick and mortar business, Callahan's Driving School and Testing Center with my brother John. This new business requires a significant amount of my time to ensure its success.  While being Mayor of our great City would have been the honor of a lifetime, it is a fulltime commitment and thus I will not be placing my name on the ballot for the Mayor of Bethlehem.

I will be running for re-election for my third term on City Council. As many of you know, I have a great love and am very passionate about our City. I am a Nitschmann Lion and Liberty Hurricane until the day I die. There is this perception and idea by a few people in our city that everything that has happened, all the good that has happened in our city over the last 20 years, was just inevitable. They think the rebirth and renaissance our City has been through over the last 20 years would have just happened by itself...that is simply NOT true! There are small towns and cities littered and scattered throughout the Northeast and Midwest of the United States that are examples of what happens when you don’t have progressive forward thinking leadership willing to keep pushing for better.

I am proud of my service on Council.  As a member and a Chair of the Finance Committee I have fought to keep taxes in check and by refinancing some high interest debt the Standard and Poor’s bond rating for the City of Bethlehem rose 4 times from a BBB Stable rating to a A+ Stable rating in just 5 years.

In my first two terms I introduced, proposed and passed the Wage Equality Ordinance that prevents the perpetuation of gender-based wage inequality, the No Gifts Ban that prohibits City Council Members from accepting gifts from those trying to influence public policy, along with improvements to the Rose Garden and Municipal Golf Course and more funding for ADA Ramps.

I also supported and voted for the Ethics Training Ordinance for City Council Members, the Community Engagement Initiative, the North Side 2027 initiative to help revitalize neighborhoods, the Open Data Group that improves openness and transparency in government, supported ordinances to ensure City contracts pay a fair wage to its employees, two new fire engines to support our fire fighters, body cameras and new Motorola radios for our police, a new EMS vehicle and funding for the Climate Action Plan.

In the next month I will be bringing forward a new ordinance that gives local businesses, especially minority, female and veteran owned businesses an advantage when bidding on local jobs.

My record of supporting critical smart economic development and fighting hard to hold the line on taxes (I voted 6 out of 7 times against tax increases) will continue.  I will also fight to make certain we fund our public safety resources at the level needed to keep our neighborhoods safe and our property values up.  Growing our tax base, keeping our neighborhoods safe and holding the line on taxes are critical so that Bethlehem remains affordable and the best City in Pennsylvania to live, work and play!

I look forward to the campaign and sharing my vision for Bethlehem.

An announcement that I am not running for Mayor? OK

He loves the City of Bethlehem so so much that he opened his brick & mortar business in Bethlehem Township! You feelin the love?

So, teaching and running a business aren't full-time, but being Mayor would be? What a putz!

Yo Bryan, don't break your arm patting yourself on the back. Must be a Callahan thing.

7:03 you are a real humanitarian.Go get a life! Ive known him since high school. He has two great kids that he brought up on his own after their mom died. Funniest and most loyal guy you have ever met.

Disappointed you’re not running. Like your brother, I’m quite sure you would have made a great mayor. Must be a Callahan thing!

I mean, it does sound arrogant.

Too many happy hours to catch up on at the Apollo grille when restrictions are eased so no time to play mayor.

Arrogant? He had so many people asking him to run because he cares and helps anyone who asks, unlike others.

Ouch! Bryan is a good guy but it is clear do not incur the wrath of the Callahan Clan. Are the shots directed a Wee Willie?

what a joke if he is so "Bethlehem Concious then why arent the streets plowed so we can get around but take a look around where he lives....you can eat off the street...he's not running for because one callahan embarrasment was enough....

5:01AM you need to get a little more sleep. A lot of things got done under Mayor Callahan, I thought he did an amazing job!

There are many and plenty of good people who care and who love to help anyone who asks. Do they feel the need to make public statements? I just feel it is very arrogant.

The fun part will be seeing who he endorses. Does Grub have a chance at beating Reynolds?

I do not see him endorsing loud mouth Willie.