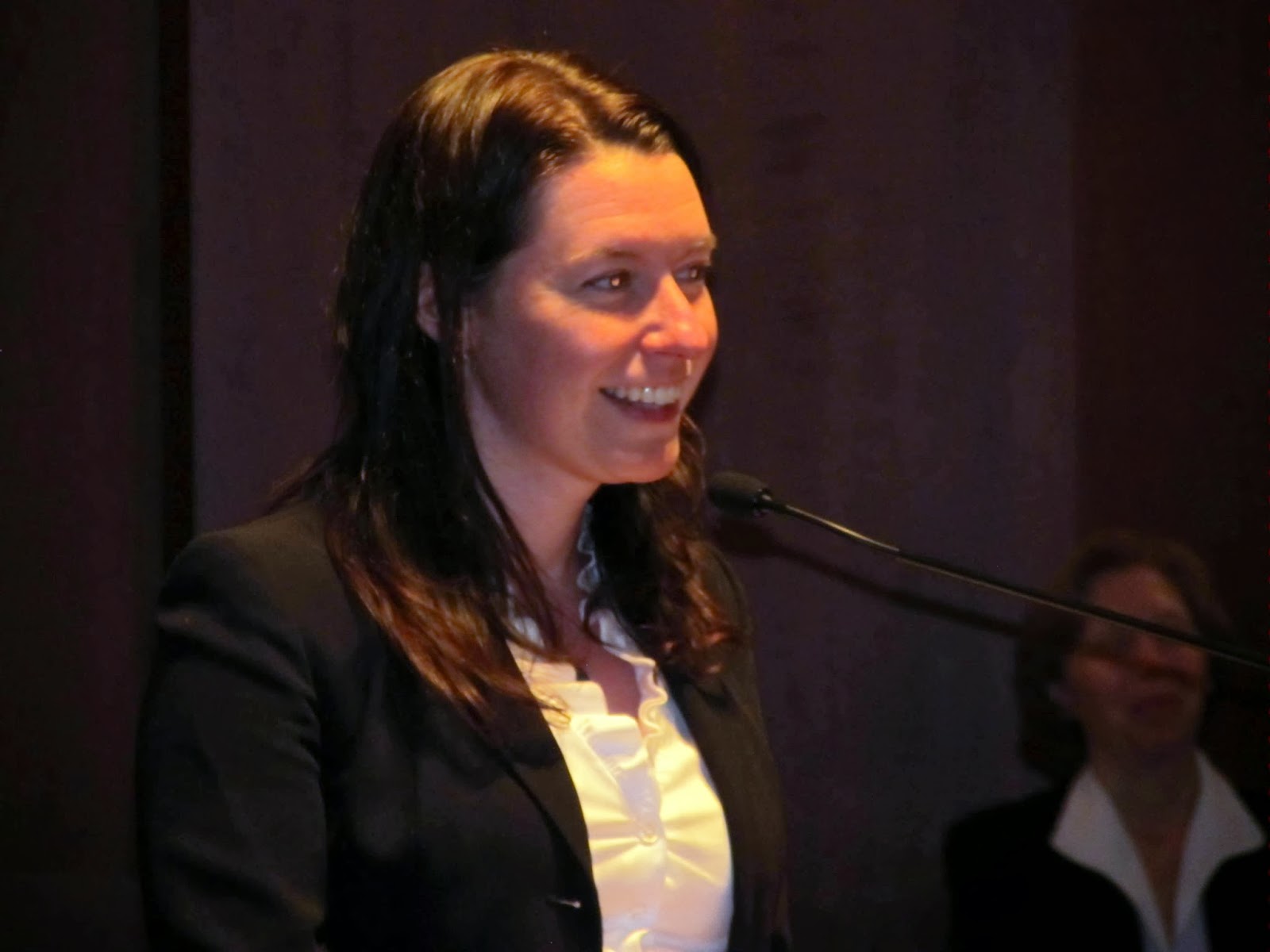 Bethlehem Township's Board of Commissioners canceled their meeting last night, so I had my choice between staying home or going to Bethlehem for another Special City Council meeting on the selection of a new Council member. I opted to stay home. I've had enough six hour meetings to last me for awhile.

Though Bethlehem is in a state of emergency and police want everyone off the roads, Bethlehem City Council met anyway to decide on Bob Donchez' replacement. But white smoke curled from the rotunda and bells are ringing everywhere, at least in my head. WFMZ-TV69 announced at 8:30 pm that three members were able to agree on someone and fairly quickly, too.

"Things won are done, joy's soul lies in the doing."

Let's see what she does. According to The Morning Call, Cathy attracted votes from Michael Recchiuti, J. Willie Reynolds and Adam Waldron.

Sonia Vazquez, the candidate being pushed by Karen Dolan, received votes only from Dolan and Eric Evans. Karen's jabs at other candidates may very well have doomed Vazquez.

David "Lump" Sanders was supported by Bryan Callahan. He probably sat at Sander's Table of Knowledge.

All 11 candidates were highly qualified. There was no way that Council could have botched this selection.
Posted by Bernie O'Hare at 2/04/2014 12:00:00 AM

She is a westsider you ass.

@ 12:04, you're the asshole as Brighton St is across the river off Rt 378 but as a life long Bethlehemite, it's really not Southside and more like Ft Hill.

In interviews and in news accounts, she is referred to as a south side resident. She lives on the south side of the river. It is close to Ftn Hill

Didn't city council go on about understanding budgets. does this lady have the skills for that?

I certainly think she is as qualified as any of the incumbents. She's been appointed to Council; not selected as Chair of the Federal Reserve. I honestly do not think there was a bad choice in this group. They were all amazing.

She will be fine. I mean look at the people that are on now. They are there as the result of popularity contests in Bedlam.

Frankly, she may be more qualified than most of the sitting members. They certainly aren't a group of brain surgeons. They only act that way.

Still think they overplayed the whole thing. Its a vacant city council seat, its not that complicated. I do agree with earlier comments that budget knowledge should have been the top consideration.

Still I doubt her pick will have that big an impact in nay case. city council is not that great to begin with.

How about this, I bet she is MORE qualified to sit on Council than most of those now serving. My God, they interviewed her like she was an employee being considered for City Manager or something.

Wouldn't want the principal of a south side elementary school who deals with residents on a daily basis. Absurd, the thought of it.

But is it instructive to her? She may very well have doomed Vazquez with her behavior, but does she understand that?

At the end of the meeting last night, after Mrs. Reuscher was chosen, candidates for the seat -- who Bernie said were savaged by Dolan in her questioning -- stated how fair they thought the process and questioning was. Candidate Ron Heckman referenced this Blog, calling it "ridiculous" and apologized to Karen for one of his answers. Candidates and council members also commented that the six hour meeting was needed, productive, and really gave candidates a chance to make their case.

Gee, I wonder who made this anonymous comment, but not too much. I stand by every word written, Karen, and as I suspected, you would be the last person to acknowledge your own petty and unfair performance.

This person looks to match the demographic of the South Side quite well!

Yet again what, Chief?

Watched the meeting from the wings. Heckman did not call this blog ridiculous. He did congratulate the winner and said while he couldn't speak for others, he felt he was treated fairly considering what he has experienced at other times and thanked council for the opportunity. So did Lumpy.

At least be accurate.

O'Hare you owe Karen an apology.

Let's see. It's pretty clear that Karen behaved badly to at least. 3 of the 11 candidates. It 's also clear that she probably ruined the chances of the person she supported with her own behavior. Then Heckman is misquoted, although even I would agree my blog can be ridiculous. And now I am told I owe her an apology. I believe Karen owes an apology to the people who elected her over the way she handled this matter. She set a poor example for the new members on Council, who acted with dignity and class in spite of her. And her comments were insulting to the fine people who applied. She owed them an apology, too.

Right after being passed over, Heckman apparently reacted with dignity and class. But instead of complimenting him, he is used as a pawn and misquoted to make a point.

Anonymous said...
This comment has been removed by a blog administrator.
February 4, 2014 at 8:30 PM

303 is correct. Ron congratulated the winner thanked council and sad he understood using diversity as "a" condition.

He told me he didn't apologize for anything as he had nothing to apologize for. He did say you can be a miserable bastard but didn't attack your blog.

Also you should check out Dolans pissy rant on Facebook.

Ron Heckman is a class act and is too much a gentleman to be rude to Dolan the way she was to him. I am a miserable bastard and no gentleman.

Dolan was unbearably rude to Ron, Sestito, Rothman and Frey. She does not like me pointing that out. Too bad.

Yet again KD reveals her true nature.
It's not pretty,Cheif.

Dolan is a mess. Her preaching on facebook is disgusting.

"Poor example" "Mess" "Pissy" are being kind! Hey Karen,why don't you roll another one down at the Mill! She is an embarrassment to our city!!!

Read mcall article today. The Latino population should have gone out to support Ms. Vazquez on the night of the meeting. It was comical how quickly Reynolds, Reccuiti and Waldron flipped when supporters came out to speak for the Police Chief. They talked in the paper, but all their silly manufactured issues disappeared that night. They backpedaled, and seemed to be apologizing as they explained themselves over and over. Likely they would have folded again.

She is an elected official, so I have to allow these comments. But they detract from my criticism. Why don't you identify yourself?

the choice of a "southside rep" was a poor smoke screen - no way no no way does the choice hold a candle to sonia with regard to southside experience or reputation. no contacts, no interactions, no endorsements from any southside groups. what a joke. how insulting. how out of touch.

Sour grapes from the Karen Dolan camp. What a surprise.

For all the pissing and moaning. why not run in an election and to those who are moaning -- vote, vote and vote. Stop asking for handouts.

This is why the Karen Dolan types are more divisive than most people.
they create the divisiveness

It is sad that so many have no recourse in the city. An unrepresented group with no hope for the future.

I am thankful there were no riots.

Oh the old victim game. The only people who did not congratulate the young woman who got it was old Sonia who was shooting daggers at her from her eyes and Dolan.

Despite all the praise I heard about this "community leader" that showed more than any words could convey.

In the long run Willie Reynolds (who thinks he has won) will be the loser for what he did to Joe Kelly. Willie showed his true colors AGAIN!

Thank you haters. I now know I will not vote for Dolan,. Velazquez or Kelly. I will inform friends and family of these people who believe they are owed something more than others.

What did Dolan do to Kelly? I thought he took a job with boscola?

He did. And decided on his own to take a step back for awhile. I am sure his twins are a lot more fun than the daggers of local politics.

Oh Bernie, when they assigned Hickey to "handle you" they did a good job. The Callahan clan is powerless. Of course Joe Kelly wanted to be on council. The old "I want to be with my family" story is a favorite for losers. He has no clout. He got a job in the Karner for Kelly trade that saved her job and helped Joe. Do you think Donchez wanted a Callahan clan fanatic in his Admisntration? Lisa helped work it out.

The people pushing him are out of chips.

Callahan was the local version of Jimmy Carter and he took down most Democrats with him. He and his clan are like poison to most Dem's at this point.