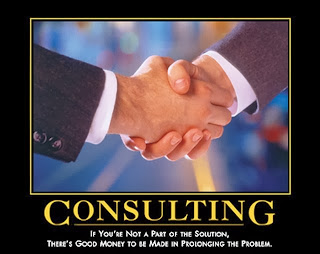 At his inaugural news conference on February 18, Northampton County Executive John Brown denied a plan to engage in government by consultant. But that's precisely what's happening. Instead of filling his cabinet in compliance with the Home Rule Charter, he's hiring consultants. And after the $715,200  Zosky consultant deal blew up in his face, he's keeping the amounts under $100,000 so he can avoid getting Council approval.

According to The Morning Call, he has two new consulting agreements. In response to a Right-to-Know, I learned there are three no-bid deals.

This is a three-month $24,000 deal with Integrity Personnel, is for a "strategic assessment" of the County's workforce. This should be cause for concern in the County workforce. Does Brown plan to lay them county staff and replace them with low paid temps? That sounds like a question for his next news conference.

Her name pops up everywhere. She's wormed her way into the Brown administration with a $20,000, one-year deal to review various projects being done at the County.

This is a one-year, $84,000 agreement with Kim Plyler and her company, Sahl Communications, for public relations.

This historically has been a facet of the job done by the Director of Administration or a Deputy. It is simply outrageous to spend that kind of money for someone whose sole job is to spin the news.

Ironically, this news manager never bothered to tell anyone she's been hired.

What troubles me even more is that, in his news conference, Brown would only say the matter was "in discussion." The truth? He had inked a deal ten days earlier, on February 8. I can't escape the conclusion that Brown was dishonest with the press

But now that he has a propaganda minister, I suspect it will become increasingly difficult to learn the truth.

Incidentally, none of this money is part of the approved budget.

The contacts are linked below for your review:

I am stunned! He actually wants to use a PR firm to communicate with or spin his progress to his constituents. Doesn't he owe them more? What is he thinking? What exactly was his occupation before County Executive...and don't tell me a business man. What specifically did he do?

I never really found out. I tried.

I overheard some one say the other day, what di you call an unemployed Republican?

He never worked a day in his life....

Not only is Brown a disappointment but Benol sounds like a real bomb. With the super qualified folks running for county council how did he get elected?

But for a few hundred votes, I believe we would have had a very qualified and knowledgeable councilperson.

So instead of filling these positions with people who become employees, he's foiling them with consultants who won't be eligible for expensive county benefits like health care and pensions?

He must believe that he is like the President who needs his own Press Secretary to deal with the overwhelming press demands of Northampton County. Press conferences with 3-4 reporters. Need to indoctrinate the public with a "Spin City" consultant. What a waste of taxpayers money!

Brown's wasting money, for sure. But your complaints are hilariously phony.

Clearly Brown was shocked himself when he won and is in way over his head. Sure, election night, and the days after, were a lot fun for him, but when the reality hit that he has to now manage an entity the size of the county, I'm sure he wishes someone else carried the R banner last November. His only initiatives have been to hire consultants to help him with initiatives. Brilliant.

These people are part of the "chamber clique" in the valley.

How many consultants does it take to screw in a light bulb?

One to screw in the bulb.

Four to tell you how to do it better.

6:16..That was a very astute comment and very close to the mark. There is obviously a learning curve and trial and error is present but I am not dismayed as some are so early in the game. It's only the top of the first inning. Let's all settle into our seats and enjoy the festivities. You never know what will happen so pay attention and keep score to the end of the game.

Brown and Muller will duel each other for the title of worst county executive for the next four years.

It will be a tight race.

Ken Mohr for president. He did so well. Stoffa was hardly ever at work.

Brown's points are well taken. For the past 16 years there has been a leadership vacuum in Northampton county. Especially for the last eight years when all that happened was rudderless spending resulting in a huge deficit.

Musty Muller will win by virtue of the political hacks he saved.

Captain Kangeroo v Mister Peabody. A duel for the ages!

and now we hire people for leadership..? go suck6;29 pm

So in his run for Bangor Mayor, Mr. Brown told all the citizens that he was in Big Business and he used words like 'Root Cause" and Global Visioning. Since no one in those parts has seen the world outside of Bangor, they voted him in 'cause he sounded smart. Then they learned first hand what clown he was, When asked about his real job, he would often say a consultant. When people started to dig, they found he worked for a PR firm. So why, if he has all this big business experience, does he need a PR firm? Will he continue his practice of holding self-tolling new conferences to discuss county business before actually following due procedure? What is so complicated in Northampton County that he needed a press team? Just what are we paying this weasel a year? can we buy him out and early retire him before he destroys the county as he did in Bangor. Whats even more scary is he left Bangor actually thinking he did good here. Schmuck

If you want to know what Mr Browns next move will be ask "Dave" the sbeltfan his head is so far up Browns ass he can tell you what he had for breakfast. Dave represents Dave and Brown is in it for Brown and that is the truth and no conttact was signed days before this statement, Bangor will not heal until they are both gone and now the county is in the same position

County council members should ask Department heads if they will answer questions or refer them to the PR people.

This is just the Republican country club type of secrecy these guys love. yet the teabaggers just keep lapping it up.

No one seriously knows what Brown did career-wise before?

Can a county executive be impeached? If yes, I think a petition needs to be started. He is a waste of my $ as a tax payer. What a mess.

Brown will cut all the unnecessary personnel in the County and the taxpayers will ultimately save.

Impeachment? This is democracy in action my fine friends. The people spoke. Are you going to p and whine for four long years? What did you expect to happen? More of the same old same old? Drastic times call for drastic action. The county is listing and taking on water. You don't have a whole lot of options at this point in time. The executive and council need to come to some kind of agreement/accommodation about the course of action and stick together and be bold. Rome is burning..everybody to the bucket brigade and get to work.

Though there are recall provisions in the HRC, an Exec can only be relaxed in the manner provided for by the Pa . Const.

I know County government. I am not complaining about Brown's election . But in his first two months in office, the only thing he has shown is a lack of transparency and a desire to serve the Lehigh Valley Zpartnership, as opposed to the people who elected him. I didn't expect much, and haven 't seen anything but corporate doublespeak.

JB and Peg need to sit down and have a serious discussion about the current state of county affairs. There is room for new initiatives as well as old school know how. It is a fine balance and worth striving for. The people deserve nothing less than the best our elected officials have to offer.

In two months, Brown could have done that and much more. He is a disappointment. This isn't Bangor. Where exactly did he work before he became Exec. Do you even know? Other than walking around in suits and talking about metrics, I Serbia evidence that he 's done a damn thing.

I think cooperation and discussions with the veterans of council will slowly emerge. These are all new relationships that are coming about. It is most surely a matter of trust and a feeling out period. It has no doubt been a rocky start but that does not mean it will be this way for the duration. Sure it could have been cleaner but that is where things are..for the moment. This too shall pass..

I'm afraid it won't. he has demonstrated no desire to be transparent, no idea to get input from former Executives and Administrators, has not filled his cabinet, is doing nothing for the people, but is taking care of buddies like Richard McAteer. Now tell me, exactly where did he work before he became a consultant? Do you even know?

The time has past where that question was truly relevant. We are pretty far down the road now and I don't think were going back there. If that question was so important..why didn't it get asked during election season? Why wasn't that exact point pressed to the max by his opponent? One question leads to many more.

Brown should maintain his moto "Ask me no questions and I'll tell you no lies". Then ask him why he is no longer on wall street? Next question how many times has he been fired? Are there any bankruptcy filings in his past? How can the voters feel comfortable with his managememt of our tax dollars as he has not shown us his fiduciary responsibilities so far. To date our odds appear better at the Sands then with him. Does he have any taxpayer vacations planned like his Famous Notre Dame trip?

It didn't get asked publicly bc there was only one debate and Brown never put himself in a position where he would be compelled to answer it. The question was asked here, repeatedly. But you have just demonstrated the very lack of transparency that has bothered me from the start.

Again..where were you ..9:54...when the money was on the table? And that is the point. If you don't ask then.. you get no response. Johnny C. had every chance to ask these questions and failed to do so. Why? I don't know but it's too late now. It's all sour grapes. The past does not exist anymore. I don't want to live there..I live here and now..today. Work with him and encourage council to do so for the betterment of all of us. He is not John Stoffa or Reibman or anybody else from the past. He is our executive..duly elected. Let's work the problems and find solutions to the issues facing us. We can.

Bernie..I understand your consternation about JB and how he rolls. I get it. Is it less than you expect? Yes it is. Will it change? I think it can and it will..with some time and effort on every bodies part. It is a two way street. I am hopeful but you are not at this time. I see the glass half full..you see it half empty. Report the facts and let the discussions/debates begin here and all around the county. Democracy in action..