Beca Boys' Basketball Beats LHS By One in Triple OT 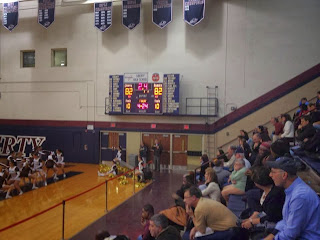 Bethlehem Catholic High School Boys Basketball Team lost by one to Liberty in their first encounter this season, but the Golden Hawks returned the favor on Friday night (Jan. 31) with a thrilling, one-point victory in triple over-time. This puts them at the head of the pack in the contentious LVC East Conference, at least for now.

It was a physical game between two teams who clearly dislike each other. Liberty dominated in the first quarter, as kids also taunted Beca player Jamal Aziz with, "You're not a Catholic," repeatedly. A fight nearly erupted as the first half faded away when suddenly, Freddie Simmons exploded.

Though Beca still trailed as the half ended, the score was tied at the start of the 4th quarter. Beca and Liberty then traded leads, finishing the game with a tie.

That continued through three OTs until a Beca player fouled out and was replaced by Andy Hudak, a 6'7" sophomore who was clearly nervous. With seconds left, he was handling the ball when the ref called a foul. He thought he had been called for the foul and was very upset, but the foul was against Liberty.

With 2.4 seconds left, Andy Hudak was given two free throws and the place exploded with noise as he nervously made his first shot.

His teammates all gathered around and consoled him, told him not to worry, and that seemed to settle him down. His second throw went through the net, pushing Beca ahead 83-82 with no time left for Liberty to do anything.

"Liberty dominated in the first quarter, as kids also taunted Beca player Jamal Aziz with, "You're not a Catholic," repeatedly."

Central and BECA doe field some of the best "club" teams around. Too bad the public schools only can use the players in their political subdivision only. (Unless they go out and get ringers and put them up in apartments or grandparents)

Off day for maligning people with half truths? Morbidly obese metabolism getting in the way of pursuit of best fiction award?

Kids can be cruel. I remember playing against a local Jewish school in NY. The taunts of, "Foreskinner!" and "Porkie!" threw my game.

I played CYO ball in Easton against Jewish kids at the JCC on 5th St. We wore. St. Anthony medals and they wore yarmulkes. I'm still friends with a couple of the guys I played against. We tried to kill each other on the court and learned to respect each other off it. Imagine that, in a politically incorrect world where we quite literally wrote our faith on our heads and around our necks.

Until we as a society deemphasize athletics, this sort of behavior will continue.

Deemphasize athletics? Why would anyone want to do that? It is as much a part of education as academics. But for the kids taunting a specific player, I thought it was a great game.

As for recruiting, there are times when one team dominates others, leading to complaints that a Catholic school does not have the restrictions placed on public schools. But just as often, the public schools dominate and Catholic schools do not. If this were a real problem, I'd expect to see Beca, Central and ND dominating in nearly every sport. The only time it was a problem is when Stem coached at Beca. The public schools hated him, took their marbles and went home. They couldn't beat the guy, no matter who he had on his football teams, bc he was a frickin' genius. So like little crybabies, they refused to play Beca until Stem left. Noe Beca loses again, and when they win, it can be blamed on recruiting or whatever.

Kids who taunt players from the stands engage in poor sportsmanship. Since the whole point is education, I would impose a technical foul on any team whose fans taunt opponents. If these kids can't learn proper behavior from their parents, let them learn it from the game.

Let me add here that Becahi's 11-9 record thus year is hardly one of domination. It is on top of the LVC East, but by only one game.

In fact, I'd say the 'Canes showed more athleticism on the court, but were out-coached.

Bernie...uh...have you seen the parents' behavior at some of these games?!?! I should have written more when I said "deemphasize" athletics. I support athletics, however I do not support the "we must win or else" insanity it has become at the non-pro level. It is nuts. The kids picked up the behavior from somewhere....

You are certainly right about that, and i see it all the time.

Public school kids simply pointing out the fact that Catholic schools can and will recruit at every opportunity.

Public school kids be punished for pointing out the obvious?

Maybe feel good goo-goo doesn't always feel so good when you are a supporter of your local public school basketball team.

Your defense of this behavior demonstrates your complete lack of sportsmanship. No matter how people feel about the fact that many kids obviously want to go to a superior school, you should not take it out on the kids on the court. That is unfair to them, who aren't doing anything except playing ball. When high school fans disparage an opposing player, that should be a technical foul. Those kids learn that bad behavior from unsportsmanlike parents like you.

The Catholic schools recruit - so what. At least the athletes are of grade appropriate age. How do the public schools justify a 20 year old senior.

These are conversations that could be had between parents and at PIAA meetings. But they have no place on a basketball court. Let the kids play. That was my only point.