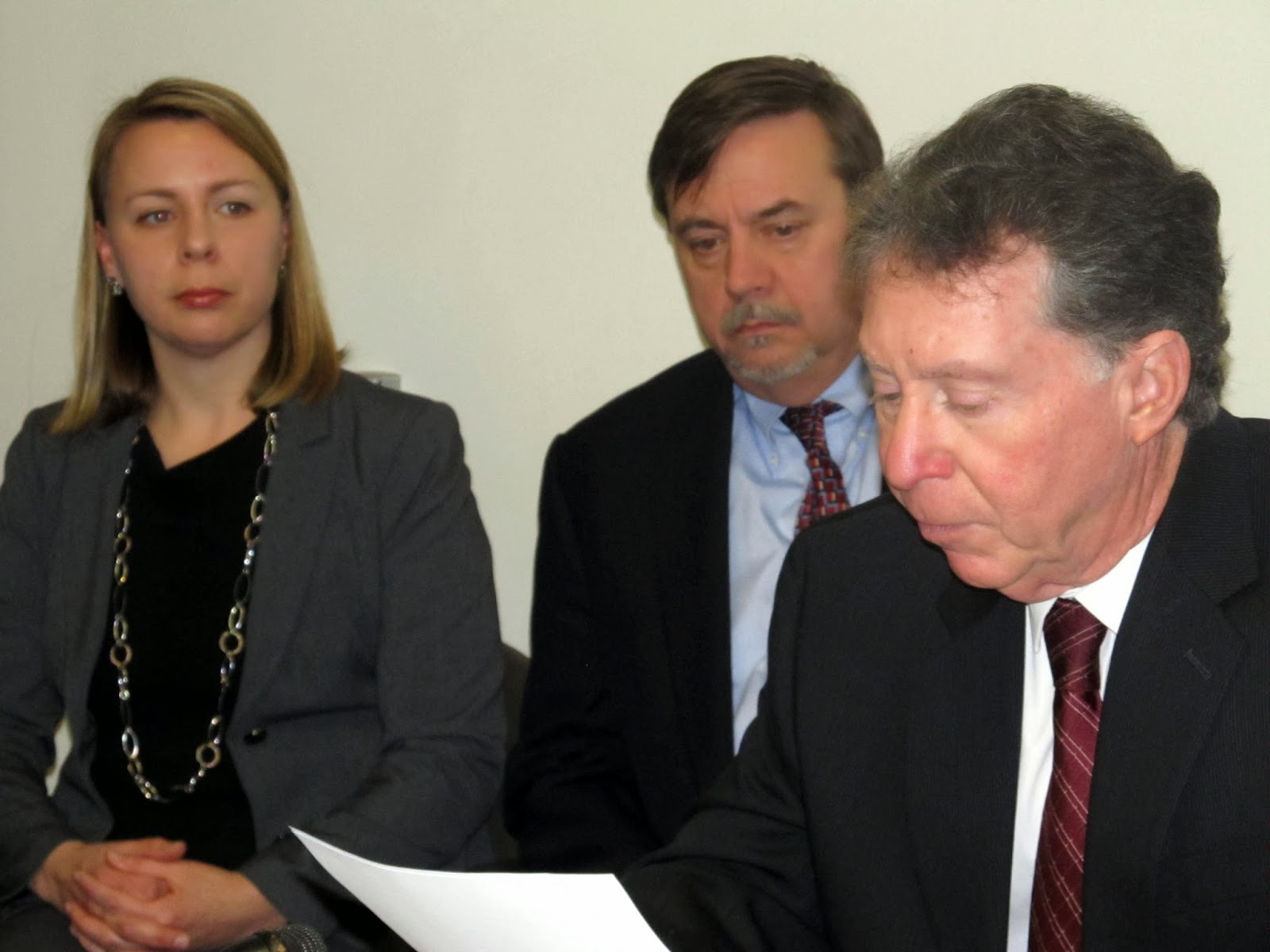 Did you know that Pennsylvania has the 6th highest total number of prisoners in jails and state prisons? That 16% of them suffer from a mental illness? That those with a mental disorder stay behind bars eight times longer than people without mental illnesses who are arrested on identical charges?  That one out of every four Americans now suffers from an emotional affliction? That two million of these people are incarcerated every year? It is these revelations that have led Northampton County District Attorney John Morganelli to attempt the formation of a Mental Health Court.

Morganelli made clear that mental health courts are nothing new. Currently, there are 17 of them in Pennsylvania.

He explained it would be a pre-trial diversionary program where successful completion or graduation could result in dismissal.

The cost of this program is at this juncture unknown, though the DA emphasized a desire to use and re-allocate existing resources rather than create another layer of bureaucracy. "Mental health courts are not for the creation of new treatment services, but to create more efficient and effective linkages to existing services," he reasoned.

Morganelli noted that some patients at the former Allentown State Hospital are making their way through the criminal justice system. Mental Health Administrator Wendy Heatley, who established group homes for many of these former patients, agreed that some are slipping through the cracks.

"We have been seeing some people that have gone out and reoffended," she observed. .

This court would be independent of a drug court or the treatment programs in place for substance abuse. Morganelli hinted that he might advocate a drug court down the road.

This program would exclude most violent or sexual offenses, where protection of the public is an overriding concern.

Though he is leaving the details to court administrators, Morganelli would like to see a program that first and foremost addresses the needs of our veterans. "Our veterans have put their lives on the line for our freedom and we need to do everything possible to help them when they return and often deal with mental illness caused by the trauma of war, physical injury and their overall service to this country," he said.

Morganelli would also like this court to address juvenile matters.

Executive John Brown made no public statement supporting or opposing this idea.

You will be there soon enough O'Hara.

With the dynamics of today's modern society, the advancement of science, the benefits and complications of prescription medicines, and our understanding of the human mind, body, and chemicals I hope his announcement was not just lip service. This has been needed for many years. Mental health will be more prevalent in the near future with society's abilities to see things that were normally over looked ... i.e. Modern communications, social internet mediums, 24 hour news television companies. Think of all the people in the Valley, or better yet, just on this blog that could be labeled with mental health problems and could use help.

One in three people have mental health problems. If the person to your left and right look normal, it might be you?

There is also an unaddressed issue of the children of said mental health recipiants? The system of this subculture being released into the public are just preyed upon by many? No true help out there in sight to keep these people safe from harm? I willing to lay odds that many crime against this part of our community go unpunished yet reported? This being because they are looked down upon by all as just plain crazy?

I can think of several candidates.

Greggy SHALL be free!

I think Gregory should be first on the sign up sheet

This is another spin on the Dynamics of justice.Last week a Vietnam Vet with "problems"was sent to prison for a year for lighting of domestic rats, AKA ferrets that he took issue with in his own house! A YEAR? So this man may have issues that we did not have acrimonious 4 letter symbioses for until after 1991 , hell he was way out by then, but issues still grind somewhat dormant until ,one day Wham o we got him and he's "CRAZY " well no shit. Look in a mirror and point your finger at yourself, and say I'm crazy / your crazy 28 times.This is what we would have our inmates do in the BRIG daily they felt better after they got out and rejoined society---- enthusiastically.

When is enough enough? The country has decided to shut down its mental health institutions. While a nobel statement by the DA,unfortunately, the prison system is the new mental health/institution. Commit a crime, do the time. If the inmate is still compromised, then he/she stays longer. Seems like that is just the way it is.

Exif we let the drug companies use them for testing we will all be ahead. new drugs for dems and less criminals. fixes the repeat problem. also rids us of the liberal bs

Nobody has ever accused Morganelli of being a liberal. programs like this, if they reduce recidivism, reduce the amount of money you pay in your tax bill. Or don't you like saving money?

The notion that being compassionate and properly treating a mental illness instead of incarcerating them is "liberal BS" is downright neanderthal.

do you remember aPresident named Ronald Reagan who said these mental institutions were a waste of money and he shut them all down Nationally. The parade of mentally ill into our prison system became evident as men and women who were homeless on our streets were incarcerated for vagrancy and other senseless crimes. Thank you Ronald Reagan. Now we on the local level are to come up with funds to take care of what is a national problem.
You're right. If given medications many of these people can be helped and thus would not be guests of our Prison system. Get the ball rolling and get these people out of our jails and into programs that will help make them citizens of our community.

1:25 AM
go to bed earlier. This program is just the kind of program that is made for you. Some medication will help your WACKO mentality and may just be the thing to keep you out of our jails and put you into a mental institution where you belong.

7:51, the decision to close Allentown State Hospital was made by Ed Rendell, not Ronald Reagan. It was the sentiment of experts that many could be served most effectively in group homes. This resulted in an explosion of group homes in the LV, which cannot be stopped by local law. I believe some of these have been successful. Others have been failures.

The cost of this program is at this juncture unknown, though the DA emphasized a desire to use and re-allocate existing resources rather than create another layer of bureaucracy. "Mental health courts are not for the creation of new treatment services, but to create more efficient and effective linkages to existing services," he reasoned.

Translation: Let's add to the cost of providing existing services and not increase services. End users (aka the mentally ill) will see a smaller piece of the budget pie.

This is how lifetime bureaucrats think.

This is a good idea.Is there still a special asbestos court? Maybe that could be eliminated for something like this.

So far as I know, there is still an asbestos docket.

Bernie @ 9:16 - you imply that my tax bill will decrease with the implementation of this program (or any program that reduces recidivism). I am not opposed to any such program, but highly doubt my county tax bill, or any tax bill for that matter, will ever DECREASE. It may increase at a slightly smaller rate, but it's been my experience that taxes will only go up.

I am not implying anything. 66 cents of every tax dollar goes to pay for the back end of crime, which includes incarceration.If you reduce the recidivism, you reduce the tax bill. This is where fiscal conservatism and humanitarianism intersect. The "let's not coddle" approach sounds great, but it costs money.

Even if that 66 cents of every tax dollar falls to 50 cents, they are still going to get my tax dollar. The only difference will be what they are spending it on. It's not likely that if the cost of recidivism decreases they are going to lower the tax rate. They'll just find somewhere else to spend that money.

That's not conservative thinking. The next thing you do is make sure you have people in government who won't waste your money.

I am happy to see that Mr. Morganelli got on board with everyone else. There are two other issues Mr. Morganelli needs to deal with..... a Drug Court, and revamp our Juvenile System. The juvenile system is a joke. Not targeting Northampton County's Juvenile system... I think our entire country needs a change in our Juvenile System. These kids can literally get away with murder. Harsher penalties should be executed, perhaps it might deter them from committing future crimes.