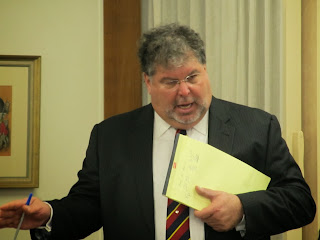 Bethlehem City Council, like Northampton County Council, has its own lawyer. They are, after all, separate branches of government. John Morganelli served as Bethlehem City Council's first Solicitor. After he as elected DA, he was succeeded by Jay Leeson. That lasted until Leeson himself became a City Council member. Ever since that time, for over 17 years, City Council has been served by Chris Spadoni. That ended on February 18, when Council member Karen Dolan introduced a resolution to replace one very able lawyer with another very able lawyer. Jack Spirk, Bethlehem's former Solicitor, will now be giving City Council legal advice.

While it is certainly within City Council's prerogative to choose their own legal adviser, it is disturbing to learn that at least one member was forced to vote against her will.

Cathy Reuscher, newly appointed to Council, said she felt uneasy voting to terminate anyone, especially someone she did not know.

But Council Prez J. Willie Reynolds told her that, like it or not, she had to vote.

Karen Dolan damned Spadoni with faint praise, claiming simultaneously to love him while complaining about his accessibility. Then when Reuscher wavered, Dolan blasted away.

"New members are required to vote. It is the law. It takes integrity to make strong decisions. This is not political, it is practical. It is an employment decision."

It is completely improper to force any Council member to vote without any facts upon which to base her opinion.

Dolan, who has no law degree, is completely wrong about the law as well. Council rules only apply to the Council that adopted them, not future Councils. There is no way Dolan can enforce 2012 rules on a 2014 Council.

Notwithstanding these rules, Council has absolutely no authority to dictate how one of its own may vote. That  hould be between her and her conscience.

It could be that Reuscher would eventually agree to replace Spadoni. But there was no integrity displayed by anyone when she was forced to vote before feeling ready.

Bernie, no beef with the new member of council. She was honest. Having said that, it would have been cool if an older more experienced person had been picked and "ordered" to vote by Reynolds and Dolan. I would have loved to hear the response that would have got. Bethlehem City Council may overtake Northampton County Council as the most dysfunctional local governmental body.

Sidenote, when are you going to post about the PR specialist J Brown hired off the books?

I can't post about that bc it hasn't happened. On Tuesday, Brown said he was in discussions with Plyler, but no decision had been made.

doober dolan is a racist, sexist, mean loon. one must wonder what she is on

She should have voted "No" then...

To me, it makes no difference what Robert's Rules or their own rules say. A Council member decides how he or she votes, not some goofy rule or other Council members. There is no way you can force a Council member to vote a certain way. Reuscher, who still has the new car smell, was bullied into voting by Dolan and Reynolds.

Anyone who thought the Callahan years were over in Bethlehem, think again.
This is the Callaghan gang exercising their thirst for power and spite, over and above the citizens' rights for a fair and functional government.
The fact that they forced a new member of Council to vote on this shows have far they'll go.
At what point do the people of Bethlehem matter to these people?
Shouldn't they be their first priority, not political payback?

Adults cannot be forced to do anything. If one cannot stand the heat....

Jack Spirk was ineffective as City Solicitor. He was never available. He's useless.

10:59, this has nothing to do with standing the heat in the kitchen, and making a tough call. This is more akin to asking someone to score a game she has not been watching.

Is not abstaining an option? Usually when one has no knowledge of something, for example approving minutes of a meeting that they missed, they abstain.

Under the rule that Dolan claims is the law, Council members have no right to abstain from approving the minutes of meetings they've missed. It's lousy thinking.

Then could she have simply voted in the negative? Doesn't that absolve her of any responsibility if the minutes were later on found to be defective or violated the law?

"Abstention" is the proper option only when the person casting the vote has a conflict such as a direct or indirect financial interest in the outcome. The proper vote should have been "present."

Agree. The proper vote was present. To not know this is to be unqualified to serve. She's seems lovely. She's just not qualified.

Bernie's, point is well made. All these reference to Robert's Rules are sweet and nice, it helps prevent anarchy. However, what counts is the LAW and actually under the law you can say hear, present, not voting, abstain or any damn thing you want. In fact you can remain silent and not vote at all. In that case the recording secretary would just record a no or not present vote.

This is not the new persons fault as many more senior members think they are bound by "laws" that really do not exist. the young lady was bullied and I only wish they had tried to bully someone who has been around that would have been funny.

Now the pick of this young lady is starting to make more sense. The Reynolds machine is on the march.

Just a few months before, when Finnerty was named Chief, Bob Donchez abstained. I'd like to see Karen or Willie tell him he had to vote yea or nay.

"Agree. The proper vote was present. To not know this is to be unqualified to serve. She's seems lovely. She's just not qualified."

Yeah, none of the people who wanted to be on Council would know that.

And the guy who got replaced, has enforced this rule many time over the years.

There is no way to enforce this rule. How someone votes is between him and the voters who would elect him. A Council member hAs no obligation to follow these rules. He could answer "hi everybody" every time he votes and Council would be unable to record it as a yea and has no power to discipline, without risking a lawsuit for disenfranchising the public .

I have not seen here abstain often.

Folks sitting on local boards should concern themselves with the merit of the question being asked. . not parle pro. That's what the solicitor is for.

She should have considered both law and substance. Council pulled a shitty deal, but she needs to wear big girl pants if she wants to serve, and maybe lead someday. Her baptism by fire is just the beginning.

Well Johnny Casino’s corrupt legacy lives on.
Thank you Willie & Karen for showing the GOOD PEOPLE OF BETHLEHEM what is wrong with City Council!

As someone who worked with mr spadoni and the city for years I want to say one thing about the man and that is that he treated every one if us with RESPECT no matter how we earned our pay.
Sorry we won't have that anymore.

Not voting or saying, "Hi Everybody" would be counted as a "no" vote, something Mrs. Reuscher could have done by just voting "No" to terminating Spadoni. No one forced her to vote "Yes" to terminating someone she barely knew; but Spadoni himself consistently reminded Bethlehem's council that they cannot abstain unless they have a conflict.

He did not advise the 2014 Council that they are bound by 2012 rules, which they aren't. He did not instruct Donchez he could not abstain on Finnerty, which he did. So stop the nonsense. It does not work with me. You bullied this Council person.

Today's one-liner: "The shortest way to the distinguishing excellence of any writer is through his hostile critics." Richard LeGallienne."

Donchez had a legitimate conflict of interest as the incoming Mayor: He wasn't going to hire Finnerty, and was open about wanting to choose his own Chief. He stated his conflict and Spadoni agreed.

As for council rules not applying after one year or not being legal: Maybe the reason Bethlehem's council members never yell or insult each other is because they follow those rules. Maybe they can break them, but they like being bound by rules that were originally created long before they took office and have worked pretty well in the past.

If there's a legal issue you're referring to, please share. After all, you welcome debate!

1) Donchez did not have a conflict of onterest as that term is defined by the Pa. Ethics Act. That is nonsense. He had no direct peculiarly interest in the matter being voted on, and under your goofy rules, could not abstain. But he did so anyway bc you can't force someone to vote who does not want to do so.

2) Bethlehem was a civil council before implementation of those rules, which legally have no effect on a future council. That body appears to heading in a disfunctional direction, in which power plays, politics and ego are taking priority over good government. I am singularly unimpressed.

I am also informed that, after the meeting in which Spadoni was dumped, one Council member began screaming at a citizen who correctly observed that what had just happened was politics. You can tell yourself that you are very civil, but don't sling that baloney at me.