Hayden Phillips Says No to Butterflies 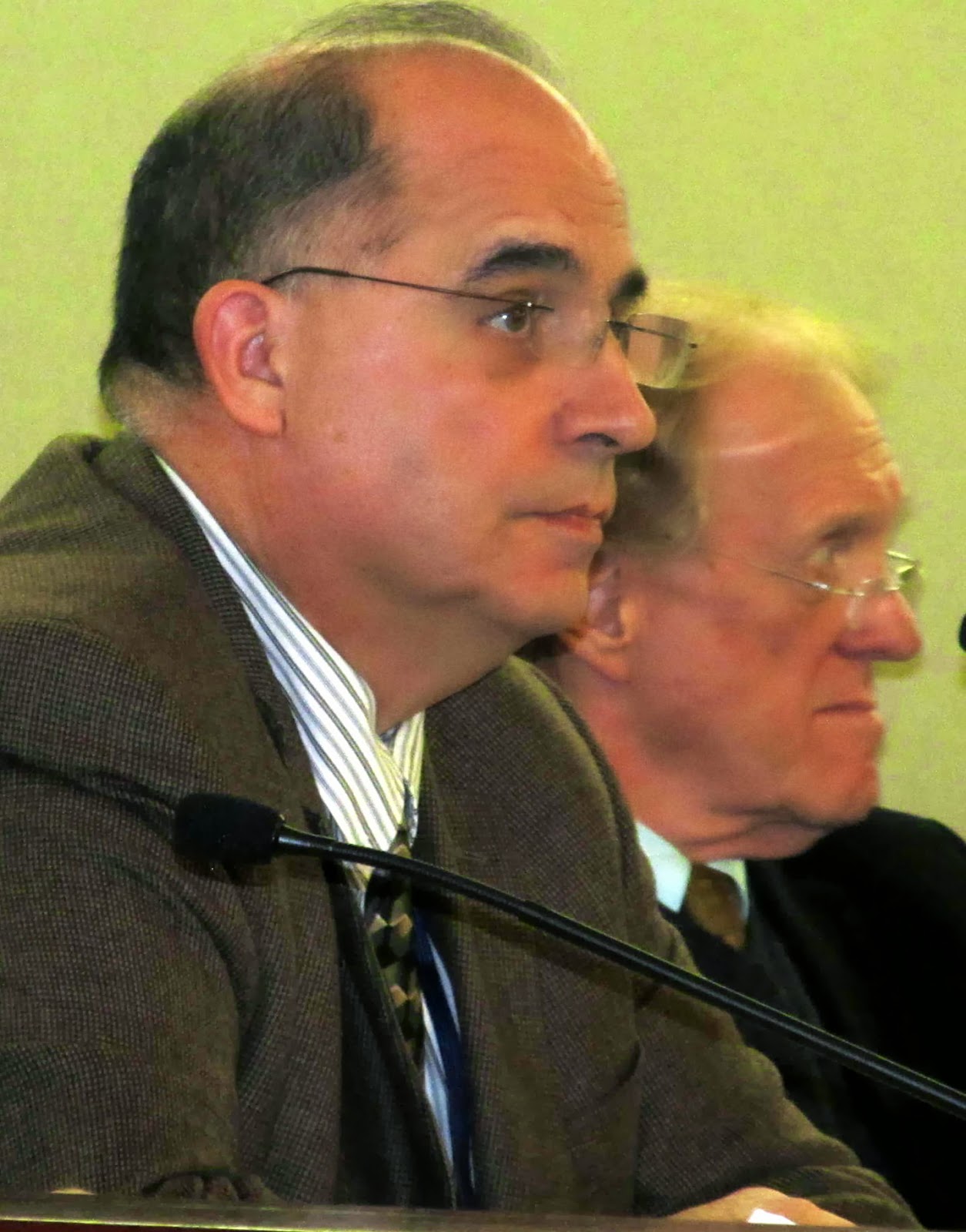 When he ran for Northampton County Council, Hayden Phillips was one of very few politicians willing to speak out against open space. This is one of Northampton County's sacred cows. When he starts talking about Agenda 21, he loses me. But the points he made last night are consistent with his campaign and are views obviously held by the people who elected them.  He was the sole No vote against four open space projects totaling $698,000. Those projects went through the Open Space Committee on Monday with no dissent. They all require municipal matches.

Phillips was absent from Monday's discussion, but he participated heavily in the discussion of the $715,200 Deana Zosky contract the following day. He opposed it, even though it had been proposed by a fellow Republican.

Phillips recalled the words of other Council members and even the Executive, who spoke in terms of "bleeding money." "Everyone agreed that financially, we're the Titanic.," he observed. "Reject these proposals," he urged. "Put this money aside so we have it in August. You vote for this, you're voting for a future tax increase."

Other Council members had different views. Peg Ferraro noted that voters overwhelming supported sending $39 million in an open space referendum eight years ago. Werner called it a "core County function." Glenn Geissinger and Ken Kraft both argued that these initiatives actually attract business, which increases revenue. Scott Parsons said that, without County assistance, municipalities would have to pay for these projects themselves and would have to raise taxes even higher.

I thought Phillips head was going to roll off his shoulders when they began discussing the butterfly habitat in Upper Mount Bethel Township, but he kept his cool.

Lamont McClure, who supported these proposals, suggested it is time to stick to environmentally significant land and hybrid properties that might have aspects of farmland, sensitive land and parks.
Posted by Bernie O'Hare at 2/21/2014 12:29:00 AM

Phillips recalled the words of other Council members and even the Executive, who spoke in terms of "bleeding money." "Everyone agreed that financially, we're the Titanic.," he observed.

If this is truly the case, then where in the hell is the Controller? Isn't he the independent auditor, assigned by the voters, to pinpoint inefficiencies within County government? We don't need a consultant. We need the Controller to do his job, if the other pols are to be believed.

Bernie please do not delete as OT but a friend directed me to facebook. In a recent entry by ken Kraft he goes off on old people. He claims that "older" people are unable to make good decisions because they are stuck in their ways and incapable of new thoughts. In his "scientific" opinion their brains are already wired and they can't change like young guys like him.

Is this guy for real. How the hell did this odd assortment of people get elected to represent the county???

He must belong to the same brain trust that brought us wee Willie Reynolds.

I have not seen the exact comment and would have to do that before concluding anything.

this open space crap is dumber than gracedale

at least there is one person on council with a brain

His views on open space are off the mark. Just when I was warming up to him. I guess he favors Soviet style centralized food production.

Anon 2:57, that is a quote from an article about the functions of memory, not written by Kraft only a repost by him.

The open space started off as saving FARM LAND. I only takes a few polotico's and their supporters to expand the program for their political life. I agree get back to saving Farm Land

Bernie I am not an Agenda 21 alarmist but I have read about it. Maybe you should look into it. You would be a better voice knowing about it.

Hayden is right. Open space is not the same as farmland. Give people or businesses back that tax money. That will help small business.

99% of the people here don't get much benefit from open space. I sure do not. When I see undesirable land being saved I wonder why. Many times no one

would want it but no our county has to buy it.

It's funny how people will praise Hayden for voting against wasting money on that financial advisor but now he knows nothing. At least he sticks to his belief of cutting the budget and not expanding it. Can't win them all....

As far as Kraft and the old people remark he reposted. Well this older generation worked harder, raised good kids by setting better examples and expecting more from them. They could have used the TV for a babysitter but instead sent the kids outside. Now they are spoiled, allowed to be on technical devises all day so no parent gets bothered. Opps the parent is on face book too. He can't compare the generations and I'll bet these people as a generation had more savings, learned to live on a lot less and accepted little it in way of handouts. Is he kidding. Oh and there are always exceptions but they are just that. Today it is in the reverse.

8:46
Who said he knows nothing? His stance on fiscal conservation is ok, as is his independance. His stance on open space is off the mark. As a science guy and farm kid I get the whole open space concept and why the program is designed the way that it is. Ever been to the Rodale Acadamy and listened to seminars about how to develop on steep slopes and wetlands? Those geological features serve a purpose and they benefit us. One day they will be prime for development.

Why would anyone spend a fortune developing such land when there are other places more desirable?. It may cost more up front but a lot less headaches. Real estate is flat and has been for 10 years. So if you can sell what you build the cost of the land is not that much. It won't change any time soon either.

When Hayden says no he will be blamed for his lack of knowledge or compassion or whatever you call it.

If he sticks to his no spending policies then that in itself will be good enough for me. Consistency shows no favoritism. Others pick and choose.

Because the land is less expensive and the soft cost balances out in the end. Real estate won't always be flat, the best time to prepare for growth is always.

Less expensive? It cost money make it workable as well as a lot of headaches and time. Land is not pricey now so why not pay a little more. Get the project done quicker and make your money sooner. All with less burdens and headaches.. Time is money and a project could take twice as long with a mountainside....

I have seen it done at the supervisory level multiple times...from both sides of the table. I do agree about the turnaround time though....getting waivers and variances can take months....but if you can get a good deal on land considered "unfit for development" it can work out in the end...of course this also depends on the local ordinances.

I disagree with his open space stance. I appreciate his consistency. I think it can be wonderful or a rip off and every project needs close scrutiny. The open space advisory board asks lots of questions, but is packed with environmentalists who like everything. It needs people willing to ask tougher questions. I do not like the idea of preserving land for gentlemen farmers. Maria Bentzoni has warned that developers are trying to cash in now, too. On the other hand, i consider farming our noblest professions, and would like to see us do more to help them. Dairy farmers, in particular, have been screwed by government policy. The little guy no longer has a fighting chance. i'f like to see the counties do more to help them. And in the case of greenways and trails, I consider them a boon to South Bethlehem's economy. So I'd love to see more of them.

This is what Kraft posted it is an excerpt from a speech by Steve Jobs telling college Graduates to not wait for their time, to take their time now. How is this a slight to or even directed at old people?

It’s often the same with any new, revolutionary thing. People get stuck as they get older. Our minds are sort of electrochemical computers. Your thoughts construct patterns like scaffolding in your mind. You are really etching chemical patterns. In most cases, people get stuck in those patterns, just like grooves in a record, and they never get out of them. It’s a rare person who etches grooves that are other than a specific way of looking at things, a specific way of questioning things. It’s rare that you see an artist in his 30s or 40s able to really contribute something amazing. Of course, there are some people who are innately curious, forever little kids in their awe of life, but they’re rare.”

I Kraft believes this bullshit he should not be in elected office. That is the problem with him and the punks on Bethlehem council. they could use some adult supervision.

Not that rare and a shame Kraft feels this way about older people. I agree.

Kraft and Wee Willie are two peas in a pod.

Sounds like you are obsessed to me. You take a quote he didn't make, and use it to force conclusions that are a tad far fetched. And now you can't let go. Did you tell him to his face what you think or are you a coward?

So you endorse thug physical in your face tactics in government. Nice to know!

Bernie,does NOT do thug physical! He deletes me all the time.