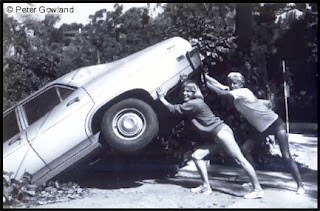 I'm driving a $500 special this Winter, on which I've spent about $15,000 so far. It hasn't worked out the way I thought it would. The latest problem is a failed alternator, which occurred yesterday. It almost caused me to miss John Brown's first news conference. But I made it, thanks to some good people.

One fellow, whom I never met, helped me push the car onto Route 248. A Colonial Region police officer actually helped me push it into the STS auto repair shop. A third person, a good friend, dropped what he was doing, picked me up and drove me the courthouse, just in time to catch the news conference. My brother, who unlike me is mechanically inclined, will put a new alternator in the car. He also gave me a ride to a friend's house. Despite being sick with the flu, that fellow dug out one of his luxury cars, which only has 29,000 miles, and lent it to me until mine gets fixed.
Nazareth cops are convinced I stole it.

You should have gone to Bethlehem. the purge continues. just to really stick it to Mayor Donchez, the Willie city council dumped Spadoni and hired Jack Spirk.
The move everyone in Bethlehem expected.
Chris is another victim of the
Bethlehem meat grinder of politics.

I hear even the Boards and Authorities have been infected. Callhan stared a trend.

so...after about 9 years, a new council hired a new attorney? what's insidious about that?

Bernie
What did he have to say about
"that $700K contract?"

Bernie,
sounds better than the snowblower that ate the freind? Keep the the car 29000 thats cherry?

@ 3:24am
Willie is following in Johnny Casino’s footsteps I see

I see the trend keep on as well. They keep the click going!