Rage Against the Machine in Northampton County! 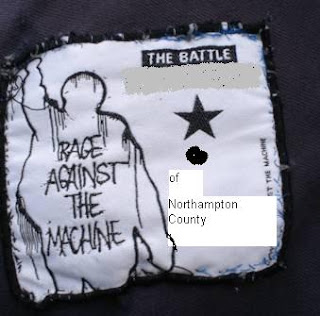 Norco Dem chair Joe Long wants the local party to endorse his picks, even for offices with contested primaries. So a few weeks ago, he scheduled a meeting of Northampton County Democratic committeeman, inviting only his chosen ones. It's the same scam he's used to get himself elected. Will Power, who's running for county council and is himself a committeeman, was among those snubbed. The meeting wasn't even listed on the local webpage.

Enough complaints were made that an embarrassed Long had to reschedule. This time, there's even an announcement on the democratic website.

The Northampton County Democratic Committee will meet March 31, 2007 at the Nazareth Jacksonian Democratic Club, 119 S. Main Street, Nazareth, PA 18064 at 11:00 AM. Park in rear @ bank parking lot. We anticipate endorsing candidates for County offices. I invite all County candidates for office to attend this meeting and to please submit a resume prior to the meeting, as you will have the ability to address the committee. Please make every effort to attend as we will have an ambitious agenda.

I've been told the machine intends to endorse Lamont McClure over Will Power and John Maher over Bill Hall. It's time for Big D Democrats to start acting like little d democrats and let the people decide these things.
Posted by Bernie O'Hare at 3/22/2007 02:00:00 PM

I will vote for the candidates that Joe Long does not support, mark my words.
I will come out from behind the 'Anonymous' cover and put that good for nothing Joe Long on the sidelines for good!!!

It has come time for his removal from any part of Lehigh Valley politics.

That was likely a violation of their bylaws. Ours specify a ten day notice for all meetings. If he tried having a meeting without notifying everyone he may be removed for malfeasance, if anyone is courageous enough to propose such a motion. Also, would he have had a quorum with only part of the Committee present?

There was a 10 day notice, or more, for the first meeting. The problem was that not everyone was notified. Alot of the notices were sent via email.
It still stinks in NorCo Dem Land

1.) Rage Against the Machine- Great, Great Band. I don't like Zack DeLaRoche much (the singer), but they kicked some ass.
2.) As a committee person, I think primaries should be a free choice. It has been told to me that 'some leaders' in the party think that "endorsing is our job." I say no, getting Democrats elected is our job. If we focused on that more, Charlie Dent wouldn't still be around.
3.) I've heard the same info about the endorsements. You are correct.

Joe Long is still living in the 80's - He's an ex-union guy and has many friends in local labor organizations.

But the good old days are gone - all you have to do is look at John Stoffa and how he managed to capture the voter's confidence WITHOUT the endorsement of Joe's "machine."

Joe should be doing what Joe does best - building relationships for Dems in the community and navigating the morass known as the State Party - folks have offered to turn the Dem's webpage into an organ that actually communicates and pushes democratic ideals, but he is quick to spurn assistance -

I think if somebody could come up with a way to keep Joe involved at an important level, he would step aside as party chair. He truly DOES want to see the Dems in Norco progress - as do I - and I think he knows that scads of Dems are very offended by this "primary endorsement" business.

Somebody has to step up and run against him for the county chair slot. Somebody articulate enough to flood the media with press releases, somebody with the clout to raise the $$ necessary to fund the important races, somebody with the organizational ability to make the Dem committee more than a one man show.

I can think of several names - Bernie - maybe you should do an article about it :D

Mr Twinkie, Thanks for the comment and the suggestion. I can think of a few guys who would be terrific and are not so divisive. But I don't know whether they would want the hassle of engaging in a coup. If you have specific names, send me an email back channel and I'll check it out. My addy is bohare5948@aol.com.

Rick Daugherty is the man. I appreciate his work more every day. He knows his role, avoids the tempation to be a machine leader and facilitates a party.

LV Dem is right. I don't think a county chair should be "cracking" a whip at all though. Their job is to get Democrats elected, not build a personal power base.

Joe Long IS the problem in NorCO and will continue to be THE PROBELM as long as he is involved. How can you let someone who time and again goes around the system to keep his "power?" He is such a weak leader he couldn't even find someone to run for the 15th against Charlie Dent. And now, he is pushing Sam Bennett for the 15th. She cannot win. Hell, she couldn't even win a spot on Lehigh County Committee (of course, unlike Joe Long's illegal reelection as Chair, that election was open and fair).

Until he is out of the Dem Party for good I will stay on the outside.