BMW's Hydrogen Cars For Hydrogen Highway: Now All We Need are Hydrogen Pumps 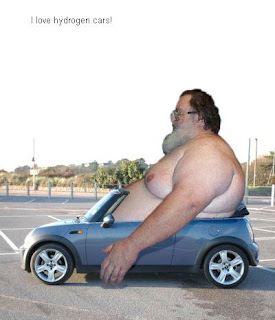 No one disputes our global gas gauge is flickering on E. When we go dry is not exactly known, but oil is a nonrenewable energy source. There's only so much, and it's mostly foreign. Even the prez wants us to reduce gasoline consumption, and is proposing, for the first time in twenty years, that we improve mileage standards for our cars, SUVs and trucks.
Local Congressman Charlie Dent is a co-founder of the House Hydrogen and Fuel Cell Caucus. He wants to convert Route 78 into a hydrogen highway. Dent's congressional website tell us "Interstate 78 is uniquely situated and suited to be a gateway to the hydrogen economy - the Hydrogen Highway East." A hydrogen network will (1) decrease our dependence on foreign oil and fossil fuels; (2) protect our citizens and preserve our environment from the harmful effects of vehicle emissions; and (3) mitigate traffic and congestion.

BMW is betting on hydrogen, and has produced 100 factory-made hybrids. Leave it a foreign car company to come up with another alternative fuel. Here's some details from Pogue's Posts.

I asked if hydrogen could explode (think Hindenburg). The engineers responded that in Germany, they’ve tried shooting bullets at the tank, slamming a construction girder into it, and so on; liquid hydrogen may burn, but it doesn’t blow up. In that regard, it’s actually safer in a spill situation than gasoline.

Now, I’m well aware of how hostile some critics are to the concept of hydrogen cars. Their primary objection, of course, is the amount of energy that’s consumed (and pollution generated) in producing hydrogen in the first place.

BMW agrees that hydrogen cars are pointless unless the hydrogen itself is produced using clean, renewable energy sources: solar, wind, geothermal and so on. “At the beginning, some of it’s going to be nonrenewable,” said Dr. Ochmann, “but the percentage will increase.” (In the meantime, even if fossil fuels are used in the short term, at least the byproducts of burning them can theoretically be controlled at a single source.)

Another objection raised by an audience member: What about getting fillups? Our government is making a big push toward ethanol as a new fuel (despite dubious environmental prospects), but there are still only several hundred ethanol filling stations in the entire country. Isn’t the situation even worse for hydrogen pumps?

BMW reiterated that moving to hydrogen will be a long-term proposition. At the moment, in fact, there are only three hydrogen pumps in the U.S. (California and Washington, D.C.) “It will be a difficult process,” Dr. Ochmann said: “station by station, gas company by gas company.”

The point is that, as he put it, “This is a marathon, not a sprint.” Many pieces have to be put in place: governmental, public, technological and legal. “We all have to move together at the same time,” he concluded.

But BMW’s point, and I agree, is that at least the technology part of the auto-fuel problem has been solved.

Yes, yes, of course, taking hydrogen to the mainstream still requires staggering amounts of investment, legislation, policy, and political will. But from a purely technological standpoint, using today’s renewable power sources and liquid hydrogen, the balance sheet for the entire cycle, from hydrogen production to driving the cars, could reduce carbon-dioxide emissions by at least 90 percent, by BMW’s calculations.

Of course, BMW’s way isn’t the only way. There are many approaches to using hydrogen in cars, each with pros and cons, each exhibiting both recent breakthroughs and significant obstacles. (The Wikipedia.org entry on “hydrogen cars” offers an excellent, balanced and up-to-date presentation on the issue.)

Most car companies, in fact, are pursuing hydrogen fuel cells instead; they transform hydrogen into electricity, which then powers the car–or, in their current incarnation, underpowers it.

Plenty of people positively spit on BMW’s approach (here’s an example). But people like this are completely ignoring the fact that all of these experiments are in their earliest stages, and will improve.

I agree with you only to a point Bernie. Yes, we need to explore altnernative transportation to reduce our dependence on oil. My vote is not hydrogen (Dent wants to help Air Products). The way to go is electrical such as -

Everyone has an electric outlet at home. Electricity is cheap, clean energy (Yeah, I know, depending upon how it's generated.) I just think that Dent's suggestion is more locally politically correct than practical. We would have to change infrastructure. Why? All we have to do is plug in.

We both agree we need to do something. H2 will require addition of H2 at our gas stations. Electric will require new outlets everywhere and a way to pay for them. That's infrastructure, too.

I don't have anything against electricity, although it's generated by burning fossil fuel. We have to get away from that, and I think we will. Right now, the electric vehicles I've seen have been underpowered.But I think that problem will be solved.

BMW is not Air Products. BMW is not building a concept car like Chevey. BMW is creating a factory fleet of H2 hybrids. It's reality. It's actuallly investing $ in the idea.

Seems to me we need an alternative energy source that is plentiful, renewable and affordable. That is easy to say and a tall order.
I also think many of our congestion problems could be solved if we simply eliminated trips. Why not creat work environments (where appropriate) where people come to the office every other day instead of every day. This would not work in every setting, but many many people can work from home. Eliminating trips would free up capacity on roads and transit systems everywhere.

I believe that hydrogen is the way to go.

Ethanol's drawback is that it takes more energy to harvest the biomass necessary than it's actual fuel efficiency.

Unless the electricity used by electric cars is generated in some environmentally friendly manner -- you're only trading exhaust pipe emissions for smoke stack emmissions.

The truth about hydrogen is that it can be produced efficiently and without emmissions as a byproduct of the operations of a nuclear power plant.

Nuclear power is an energy source that we need to re-examine in America. A lot of countries that are considered to be at the forefront of "green" politics in Western Europe, France, Germany, some of the Scandanavian countries rely heavily on nuclear power.

We need more futurists thinking about this.

More information 1:50, I don't know if it is that high, but you're certainly correct in observing that much of our h2 comes from fossil fuels. That point was considered in the blog post.

"BMW agrees that hydrogen cars are pointless unless the hydrogen itself is produced using clean, renewable energy sources: solar, wind, geothermal and so on. “At the beginning, some of it’s going to be nonrenewable,” said Dr. Ochmann, “but the percentage will increase.” (In the meantime, even if fossil fuels are used in the short term, at least the byproducts of burning them can theoretically be controlled at a single source.)"

I'm not a Dent guy, but I don't see why the fact that he wants to help Air Products is treated as a bug instead of a feature. Whether we solve our energy problems with cars that run on oil, hydrogen, ethanol, electricity, or fairy dust, people in the Valley are going to need to work. No reason we shouldn't push for an efficient solution that also grows our economy.

Anon 3:06 - That's exactly what Dick Cheney said about Halliburton. Is this about Dent's agenda getting business to one of his biggest campaign contributors?

This post is primarily about BMW and the idea of H2 as an alternative fuel. BMW is moving in that direction. It's nice to see an auto company actually do something instead of building concept cars. We need to start working on solutions instead of drawing politics into everything 24/7. While you're rejecting solutions for purely partisan reasons, we're running out of fuel. I think that is a serious issue that needs to be addressed NOW.

I mentioned Dent bc I know he is a strong H2 advocate. We need leaders from both major parties who are committed to alternative energy sdources. And honestly, I hope it does have something to do w/ Air Products. It's a local company, one of his constituents, and employs a lot of local people.
What's he supposed to do - ignore them?

I do think we need a lot of campaign finance reform. We need clean elections. But if truth be told, both major parties are equally guilty of making no real effort to reform, especially on the state level. Don't kid yourself.

And I'm not offended by the notion that Dent accepts money from Air Products. I'd rather see a local candidate take local money than money from all over the place. Air Products IS a big Dent donor. It's also in his district. But look at folks like Reichley or Harhart. Most of their money comes from outside their districts.

I think Bernie's got the right response. Cheney's job, of course, is to be indifferent between American companies, because we're all his constituents. To the extent that he favored Halliburton over other US companies and wasted government money doing it, he betrayed the public trust to make money for himself.

Dent's job is, in considerable part, to help people in the Valley. Sometimes, that means making choices between local companies and their employees - and his priority is the companies way too often.

But in this case, helping a local corporation would be the right thing to do whether they were a donor or not, wouldn't it? I realize there's an appearance problem, but that's just because of the way our system of campaign finance works.

Nice bmws hydrogen cars for hydrogen highway: now all we need are hydrogen pumps post! Thanks for intesting info!

Nice bmws hydrogen cars for hydrogen highway: now all we need are hydrogen pumps post! Thanks for intesting info!

Nice bmws hydrogen cars for hydrogen highway: now all we need are hydrogen pumps post! Thanks for intesting info! More bmw can be found at http://www.auto-portal.us/