Allentown: A City of Two Tales 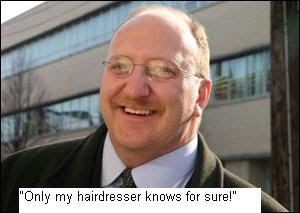 Last week, I reported a rumor concerning Allentown Mayor Ed Pawlowski. A letter read on Ron Angle's WGPA 1100 AM talk show complains that Pawlowski plans to fire Code Enforcement Officer Eric Weiss, a thirty-year city worker and executive committee member of Pennsylvania Building Officials. I've left a message for Mr. Weiss at his city office, but he has not returned my call. The Mayor's office did confirm that Pawlowski is trying to dump Weiss, but can't disclose why.
Whenever a thirty-year city or county employee is shoved aside by the top dog, it's important to know what is going on. Over the past week, I've heard two versions.

Version #1: Hizzoner gave Weiss two lists. The first included those to be prosecuted for code violations, like Americus owner Mark Mendelson. The second list, a leave alone list, is supposed to include owners who are really trying. They also just happen to be Pawlowski campaign contributors. Weiss refused to play nice.

Version #2: Evidence is mounting that Weiss accepts "favors" from some of the property owners he's supposed to be regulating.

What's really going on? When running for Mayor, the "Pawlowski plan" included a promise of "better communication" between residents and city hall. Now would be a good time for that. The Mayor must remain silent about personnel matters. I understand that. But he has an obligation to disclose whether a campaign donor or anyone else, for that matter, is getting special treatment.

This matter has also been discussed at Keystone Politics, LVCurmudgeon and LV Political Blog. It's time we hear the Mayor tell us it isn't so. I'm sending this blog to his office.
Posted by Bernie O'Hare at 3/12/2007 12:01:00 AM

I remember an article in the Morning Call about a month ago (can't find the link any more) that talked about a Pawlowski campaign contributor who was thoroughly pissed about being cited by the city for a variety of code violations in his apartment buildings that led to eviction notices being posted. I do remember that he was huffing and puffing about the mayor not defending a contributor (he really did leave the impression that he expected a favor). As I remember, he then said he was putting all of his Allentown properties on the market and getting out of town. Now the condemnation of that building at one point had to go through the Mayor I'm sure, if only b/c the solicitor (making sure that legal process had been followed) had to talk to him about it. I'm not sure if the eviction notices are still in effect, but if they are, I don't see number one being a very good explanation. This story would actually show that the mayor had no problem targeting contributors... again, assuming the evictions are still in place.

It is veryt important that the truth be established re version #1. Yes, it could very well bt that a campaign contributor became so pissed that Pawlowski changed his practices. This really needs to be cleared up. I don't think it's an unreasopnable request. I have asked the mayor's office for a written explanation.

nice classical reference in the title. The heat is on, lets hope it thaws the ice that is concealing the truth!

It is widely know there is a huge problem in the Zoning/Codes office.

Long before this debate it has widely been known that there are huge problems in the zoning office, ask anyone who tries to open a business in Allentown. Unprofessionalism, working in an untimely manner, or simple mistakes by this office have probably pushed away countless opportunities for the city.

It appears a house cleaning is long overdue. Its not like Weiss is being fired, he is being asked to retire, what is the big deal? He could have chosen to do so gracefully but the city may be forced to bring certain facts to life simply because he doesn't want to recognize his time is up.

It's plausible and so is version #1. After these rumors have circulated for a week, I'd really like the Allentown Mayor's office to explain the circumstances. It does not have to address the employment situation, but could add light on the question whether it has now decided to show favoritism.

Although I do not think Scenerio #1 is likely to be the root of this discussion, it should be noted that grace periods are part of the codes process.

I have learned that there is some grey area when it comes to enforcement depending on the effort a building owner is making and risk posed to the public.

I appreciate what you're saying. It is my hope that someone from Allentown's administration will make clear whether version #1 has any validity.

I'm sorry you weren't referred to me when you called the mayor's office. Next time, ask for me by name. As you note in an earlier comment, here are some things we can't comment on, such as personnel decisions, for legal reasons I'm sure you understand.

However, I want to make it clear on behalf of Mayor Pawlowski that he values integrity above all else.

He does not and will not play favorites. It doesn't matter who you are, whether you are a contributor or not, if you're building is unsafe you will be cited and taken to court, if necessary, to ensure the safety of the people of Allentown. This is why the city is hiring seven new inspectors this year.

Again, I will not because of potential litigation name any specific building owner on this blog, but as for the allegations that charges were dropped in the case cited on-air by Mr. Angle, that is untrue. The case was continued and as of today is scheduled to be heard April 4 by DJ Karen Devine. I'm sure that if you ask this particular property owner -- who, yes, made a contribution to the mayor's campaign -- he will not have many pleasant things to say about the mayor right now because the codes are being enforced.

Finally, please remember that this is an election year. There will be all sorts of mud flying before November ends, and much of it will be thrown by people who have nothing better to do because they can't come up with any solid criticism. I urge you to consider the source before publicizing these allegations.

This administration is focused on integrity, on the positives, on the things that need to be done to make Allentown a city we can all be proud of.

I enjoy your blog and I enjoy many of the other local blogs. Bloggers often report what the mainstream media either ignores or cannot get to. But like any reporter, you have an obligation to find the truth before publishing. I will always respond to your calls, and if I cannot give you the answer you seek, I will do my best to tell you why I cannot.

Joe, I appreciate your prompt response and will immediately give it the visibility of a separate post.

As far as publishing this rumor is concerned, I understand your point. I decided to go with it for these reasons: 1) It was already on the radio; 2) I called the mayor's office and got no answer; and 3) I called Weiss and got no answer.

Reporting on rumors is never a good idea.

A man's character is a bit more valuable than an inuendo.

As it stands now we went from questioning the Mayors character to questioning Wiess's. You wield a mighty shotgun my friend.

I appreciate your point. I felt justified in publishing this for the following reasons: 1) The rumors were already mentioned on Angle's radio show; 2) I did call both the mayor's office and Weiss for their sides, and had heard nothing; 3) Blogs are unlike the MSM in that our information is unfiltered and not vetted the same way that would be with a news account; 4) I made it clear throughout that we did not really know what was going on; AND 5) It is always extremely important to know whether a public official is playing favorites.

I thought about exactly what you mentioned and decided to go with it. It was a close question for me, but I thought it was the right thing to do. I understand exactly what you are saying, and think your criticism is very valid. I would not have published an allegation in a newspaper, but don't think the same standards should apply to blogs. I believe I do have an obligation to talk to the sides in question, and I did. So I think I acted ethically, but I understand your concerns and how this can be perverted.

Here's what concerns me Bernie: Headlines. Your first title on the matter was "Something Stinks in Allentown" and then you told the story of what you had learned. Already, the frame has been established. If effect, you created a filter for all readers just by reading the headline. The frame that I got (but didn't buy) was that the Mayor was undertaking some shady dealings.

Now, I know the nature of a blog is editorializing, but reporting on these matters creates an obligation, especially if you are reporting first news. Continue to cover, but on breaking news items like this, tone down the headlines is my suggestion. Don't stop the reporting, but recognize that headlines have some power in the world.

I would not have gone with this except that it was already out there, and it disturbed me. Also, there is a lot going on in LC that is not being reported. The MC is really the only show in town. The ET has little more than a foothold there. Most blogs don't seem to write about the personalities or different meetings, either. I am not criticizing the mainstream here. It's just that competition tends to make the coverage better. It's human nature.

Now, we have an allegation that the mayor is firing someone bc he refuses to go soft on campaign contributors. I'm able to confirm at that time that a 30 year city employee is being squeezed out. I didn't know what was going on exactly, but I thought I was entirely justified to say that something stinks. In fact, that's exactly what I think blogs are for.

When I did not get a response from anyone in the know, I kept pushing until finally someone answered. I make no apology and think it was justified. It's a close question, but I made my decision to go with this until I heard from someone. Allegations like that require answers. Moreover, too little attention is paid to what goes on in LC. Most of my contacts are here in NC, but LC is a fertile field that has been ignored.

There are many other topics that need to be explored. Why don't Cunningham and Pawlowski get along? How much time is Cunningham spending in the office? If he's in Allentown, then why did his campaign committee buy him a car? What's going on with their courthouse expansion? How about Lehigh's nursing home? I've heard some horror stories.

Chris Casey does a great job w/ the Macungies, and Northern LV Logic has really started to open some doors. Julian Stolz is doing great work on Emmaus. But I think there's a lot going on that we simply don't know about.

It was a close question. Perhaps my decision was wrong. Perhaps I should have tried harder to get some answers before I wrote anything. Believe me, I've questioned myself on this one, but made a decision, and I can live with it.

But it's time that someone starts looking at LC, too. It's actually good for government in the long run.