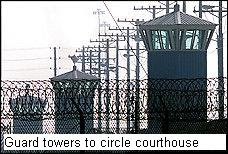 If you ever visit the judges' new palace in Easton, be prepared for a rude awakening. First, you'll circle the campus, searching in vain for a place to park. Eventually, you'll just run out of gas and abandon your car. Then, you'll walk all over the place, trying to figure out how the hell to get in. Although there are thousands of doors, you can only enter at the most inconvenient place, the rotunda. That's located atop a steep hill that will make you feel like you've just conquered Mount Everest. Once you step in and put out the fire in your lungs, you'll be funneled into a search center. There, deputies have the thankless task of looking through your belongings to make sure you haven't come to kill anyone.

Once I make it to the recorder's office, I hear the same tired complaints daily."They rooted through my purse!" ... "I had to spread my arms out like a criminal." Personally, I have no gripes with the deputies. They're just doing their jobs. The real villains are our paranoid judges, who illegally ordered these searches in the first place.

That's something I wouldn't say until today. Back in October, President Judge Freedberg just issued an edict, a court order, regulating how the building would be entered. It was thumb tacked to a few bulletin boards. No public hearing.

Our judges are terrified of the commoners. They have reserved parking with a private entrance, closed dining room and their very own judicial potties. Their "chambers" (a classy word for office) are located on a locked floor, guarded by vicious wolves. (OK, I made up the part about wolves). They're isolated and out of touch, a paranoid bunch. But I still wouldn't call Freedberg's manifesto illegal.

That's because yesterday, our Commonwealth Court handed down its own ruling on those point of entry searches in Jefferson County. What they say trumps Freedberg. They outrank him.

In Northampton County, this means county council. They are the body that adopts ordinances, but only after hearing from the public. They are also the residual power in the county and public access to row offices should be regulated by them. They are the only body with authority to impose penalties (in an ordinance) for persons who ignore requests to be searched.

President Judge Freedberg's October order usurps the authority that properly belongs with county council. It also denies the public the right to be heard. We peasants have rights, too.
Posted by Bernie O'Hare at 3/15/2007 01:00:00 AM

Bernie, prior to the new courthouse opening, attorneys were issued access cards, just like the employees had. I am not sure if title searchers had them, too. When the new courthouse opened they changed the type of access card that was used and did not allow attorneys to get them. Now the attorneys must get searched everytime they enter the courthouse.
For years they never had a problem with attorneys using the access cards. Now they do.
I think the Judges' phobia of the public is threatening the process of justice we believe in.

Agreed. Before the expansion, cards were issues to members of the public who used the courthouse regularly. You had to undergo a criminal background check at a cost of $10, after which the sheriff would snap your picture and issue a card. It didn't matter who you were or who you knew.

Members of the public attending county council meetings, which occur AFTER the judges are long gone, are searched. I heard a complaint from the wife and son of a county employee about how they were treated, and this was after hours.

I've seen scant evidence to justify even this minimal intrusion, but governments across the country are afraid of the people. That's a bad sign in a representative democracy.

Cards are now issued to courthouse workers. Some lawyers who work for judges or the DA get cards, too. I'm not sure exactly how that is handled. But most lawyers must be searched.

A complaint that this is an unreasonable search and seizure would probably fail. But the complaint that this search has been unlawfully ordered, will probably succeed. This is especially so now that the courthouse has two wings. One is primarily devoted to judicial functions. The other is primarily devoted to other aspects of county business. Judges might argue they have inherent authority to control their courtrooms. But that argunment fails for people visiting the wing that has very few judicial functions.

The only body that has authority to determine whether people can be searched is the residual power of the county - its council. And that makes sense. They can conduct a public hearing and decide what's best.

Right now, the searches for people attending county council meetings are totally lawless. There is no authority for these searches. Anyone who wanted to mount a challenge could argue that the search is designed to deter public participation. And of course, that's exactly what it is designed to do. Government fears the governed.

Last time I checked, we were still a democracy and judges are not kings. Under our form of government, it is up to the people's representatives to decide how the government center is accessed.

Now that we have guidance from the commonwealth court, I hope the county agrees that these searches must be authorized by council.

The biggest problem I have with attending county council meetings is getting in amd out of the building. I have never been searched other than my purse, but not my person.

Bernie, I was just thinking about the easy access I have always had at the Brookville (Jefferson County) Courthouse. I have never seen anyone from the Sheriff's Office when I have been there nor have I seen a metal detector in use. I have a sense that the parties involved forced the issue. I think the Jeff.Co. Commisioners are reasonable in their efforts particularly since everybody in the county owns and carries guns.

The ability to saunter in and out of the Brookville Courthouse was on my mind as I was given the strong arm treatment in Stroudsburg yesterday (3/14) while trying to file some mortgages. It seems my cell phone has a camera in it. Where did I get off trying to bring a camera into the Courthouse? Not even the press can bring cameras to the Courthouse, to quote the deputy. Didn't I hear about 9/11 "sir!?" I had to surrender the phone and sign a "property waiver" (Yes I kept a copy). As I left the Courthouse a few minutes later I saw that they had put my phone in an official looking sheriff's office baggy. It looked like the prior denizen of this poor baggy may have been a reuben sandwich.

Anon 2:53, Thanks for the perpective from soeone who actually visits Jefferson County. Looks like they did it the right way.