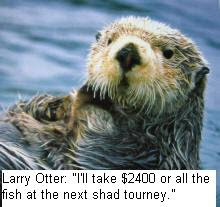 H.R.H. Deborah DePaul, Northampton County's voting registrar, brought her own mouthpiece to last week's citizen panel studying our election troubles. But that didn't shut her up. No, siree! Hired gun Lawrence Otter and H.R.H. DePaul doubleteamed to drown everyone else out. She justified this paid windbag as a "buffer" to protect her "from the falsehoods and basic lies."

Here's my question. Who's going to protect us from her?
H.R.H. DePaul's attorney has just billed the county $2,470.78 to represent her last Wednesday, according to some county employees I won't name. He even billed the county for a $36.83 din din with DePaul at Uncle Wesley's! Mmmm. H.R.H. DePaul wants the county to pay for her crabcakes. Otter ate fish and frogs.

Otter also billed taxpayers $33.95 for his swim up from Doylestown. No wonder he was hungry.

Why would H.R.H. DePaul direct her shill, who supposedly represents her, to bill the county for his services and even their dinners? This is just unbridled arrogance from an employee who will never understand she's here to serve the people, not to be fed crabcakes by them.

Did someone in the county administration pre-authorize this ridiculous charge? Director of Administration John Conklin, H.R.H. DePaul's boss, tells me he knew nothing about the bill until it came in the mail. I'm sure he'd like crabcakes, too. Hell, he can hire me as a consultant and I'll just bill the county.

Funny thing. Nothampton County has a seasoned attorney, Chris Spadoni, who is paid to represent H.R.H. DePaul officially. He also attended last Wenesday's meeting, waiting for someone to ask him a question or offer him crabcakes or something. And Chris loves crabcakes. He'll eat just about anything that isn't nailed down. I found that out when I sailed with him many years ago. We had to go without food for several hours, and Spadoni ate a dentist.

Maybe Norco Dem Chair Joe Long will pay the bill. Long already thinks he runs the elections office, anyway. And he is a crab.

Why is H.R.H. DePaul still employed by the county? The Express Times, said it best. "DePaul must accept public criticisms of the office and make it more user-friendly, or step aside for someone who will." It's bad enough she felt an irrational need to bring a lawyer to a meeting of fellow citizens. But now she is trying to stick taxpayers with the bill. It's time for her to step aside. After all, PennDot could use her for our next Valentine's Day storm.
Update: The Express Times and Morning Call both report the latest DePaul dis. Last Wednesday, H.R.H. DePaul claimed to have brought an attorney because "Enough is enough" and "It's time the truth comes out." But her attorney is not her attorney. "I didn't hire him." Confused? Welcome to the bizarro world of Debbie DePaul.
Posted by Bernie O'Hare at 3/06/2007 12:01:00 AM

Maybe she took the same "Soak the taxpayer Courses" as Tom Gorr did at Desales! Does she have a county credit card?!

I sure hope not. What could she be thinking?

If I were the county executive, Ms DePaul would be filling out unemployment papers right now.

Bernie, you're beginning to outflank Angle - isn't he usually the one who comes up with good dirt like this first?

Have you switched breakfast cereals?

I've lost confidence in these officials and the process. This whole thing stinks like, well.. umm, like fish!!

Angle usually finds these things out way ahead of me. I did beat Angle out on this one. But after I told him, he was able to get me a copy of the bill with the charge for Uncle Wesley's in about 15 minutes. That was something I couldn't do in several hours. He says I'm too meek. Gosh.

Anon 10:48, Don't give up hope. The GOOD news is the county refuses to pay. Now I've got to check your link.

bernie et al,
The unfortunate outcome of this and the other unsavory aspects of this voters' nightmare is voter apathy. It places even more pressure on the Commission and the County Executive to rectify the issues and repair the damage to the department. Norco needs and wants to 'get out the vote'.

GG, If these problems are not quickly addressed, that will certainly be the outcome. But I am glad for the panel and the work it has done. Every member has been very impressive. Although I have a flippant writing style, your concerns are mine as well. Stoffa has been more than fair with DePaul, who characterizes constructive criticism as "lies" and personalizes everything. This latest action warrants an immediate response. DePaul must step aside.

I mean, I've heard of waste spending, and I would certainly support any county official having the solicitor at their disposal (for county business like this), but you mean to tell me they wanted to bill the county for a freely chosen private attorney????

Frugality it is not.

OK, Let's see $22,000 on a study as to why windows leak? That's a brilliant use of taxpayers money. If the county weren't taxpayer based as in corporate America it would go belly up. Don't worry without the union contract there will be a lot more people stepping then just Ms. H.R.H.. Lehigh County looks a whole lot better. Better leadership and a lot more money. By the way- you need a mint your breath stinks of doodee.

Cool picture of an otter!

illustrative of immaturity, and poor judgment.

GG's right...voter apathy...its too bad. But it is what it is. It illustrates the fact that we're becoming the laziest, fattest, dumbest, most ignorant & apathetic culture in the developed world.

But we have the best daytime TV.

Speaking of which, Bernie...you should host a talk show on local TV.

Now comeon, who can top Amy Burkett? I have a face for radio and a voice for blogs.

So does Burkett, but it ain't stopped her from bein' on TV. You could even have a equipment/utility van with that radio face of yours on it. Think about it?