Norco Arbitration Award - Good News for Its Other Unions 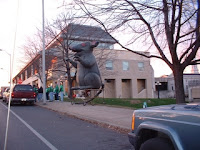 Over three hundred county employees can smile for the first time in more than three years. Both The Express Times and Morning Call have publicly disclosed last week's arbitrators' award. County employees are entitled to retroactive payraises, longevity increases identical to what is provided to nonunion workers, and annual 2.75 per cent salary increases through 2009. Total cost to the county? About $2 million, less than the amount our disinterested county council allowed Bethlehem to keep for shrubbery along one of its roads.
The arbitrators' award applies to workers who can't strike - court related, court appointed and juvenile detention employees. No private bathrooms or private dining rooms for them. During this entire ordeal, not a single judge could be bothered to speak up for the peasants. Instead, they've issued ridiculous court orders forcing employees to jump through hoops to get in or out of their over budget marble tomb. So much for justice. Courthouse workers should remember this when Judge Steve Baratta seeks retention.

What's left? Some unions are in or waiting for arbitration. But the county's residual unit (911 workers, custodians and clerks) are waiting for fact finding. They start March 21, and there must be an answer by April 2. A residual unit, unlike the others, can strike.

This arbitrators' award is good news for them because it's more or less what they can expect for themselves. But what's truly unfortunate is the absolute disregard for the county's backbone - its workforce. And I blame everyone for this failure. County executive Stoffa should have worked hard to get this resolved, but should have worked harder. Unions should not have ignored Stoffa as they did. County council should have spent one-tenth the time on its employees' morale as it spent pondering millions for developers' roads in Bethlehem and Wind Gap. And our judges quietly pocketed big raises from Harrisburg while doing nothing for their servants.

It is already too late for some county workers. They are so disenchanted by county administrators their morale can never be restored.

County budgets should never be balanced on the backs of its workforce, and this is the mistake that led to eleven unions. That is Glenn Reibman's real legacy.
Posted by Bernie O'Hare at 3/07/2007 09:19:00 AM

as i understand it, the award is pretty close to the last offer put forward by the administration. do you know if that true, bernie?

Anon 11:29, I honestly don't know but would not be surprised. I do know that people should never be forced to suffer like that again. The admin will blame the union and the union will blame the admin, while a disinterested county council plans its renovations. There's enough blame to go around for everyone, don't you think? This should never happen again.

County ewmployees should be paid a living wage. In my book, thjat's a little more important than shrubbery or the judges' new marble tomb.

The award is certainly not going to help county employees make a living wage. The award doubled the cost of health care premiums and increased the deductibles. Whatever was gained in wages was lost again in health care costs. Not sure how this arbitration is good news for the other unions.

Tom, I don't think it's a wash. Employees are in beter shape now than before. But I'd agree it's not really a living wage. What's good about this is that employees have a raise, something they haven't seen for more than three years. And it piuts them in a position now to push for a living wage.

Oh, come on let's be real now. It's no credit to the top dog. Everyone knows who's getting the job done now. Let's hope he steps down before he actually screws up royally. The wise thing to do would be for Stoffa to step aside and let the new D.O.A. take over.

Anon 8:00, I looked through my posts and the comments to see where I gave credit to Stoffa for this. I didn't. This is the one area where I think he should have pushed harder, and I said so. But I'm glad you feel that John Conklin deserves some credit for this resolution. He's been a real asset to Stoffa and the county. They both need to wrap up the residual unit as quickly as possible. I'm sure they're just thrilled they now deal with 11 different unions.