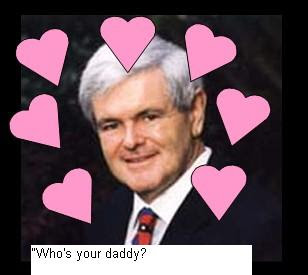 While going after Bill Clinton for his wandering ways, Newtie now tells us he was doing the same damn thing. That dawg!

"The honest answer is yes," Gingrich, a potential 2008 Republican presidential candidate, said in an interview with Focus on the Family founder James Dobson to be aired Friday, according to a transcript provided to The Associated Press. "There are times that I have fallen short of my own standards. There's certainly times when I've fallen short of God's standards."
Posted by Bernie O'Hare at 3/09/2007 08:24:00 AM

With Newt, it's a way of life (I think he's currently on wife #3). And what I find most interesting is that the only major repub candidate that has had only one wife is Mitt....and he's the Mormon.
dg

They could be on to something. That "family values" line must really work.

I had to roll my eyes after reading that Newt (great reptile that he is) was having an affair while the Clinton debalce was in full effect. I'm a liberal Christian and to think that 'family values' message was the key ingredient that got the conservatives sickens me to the core that the gospel is being tainted by our leadership. How can we ever expect other cultures/religions to respect us?

Next Question, Did Newt ever have carnal relations with Anna Nicole Smith?
Nancy Grace better get on it!

Chris, the answer to your question is yes. Secondly, I want to know if Newt has ever had an affair with Ms. Coulter. Yuck!

Check out who is in the Devil's hot tub together:
Newt, Ann Coulter, O.J. Simpson, and Ron Angle!
Wonder who gets friendly with who first!

Well, I don't know about any of you, but I'm switching parties today.

If Ann Coulter gets friendly with them, they'll have a "gay marriage" issue to deal with.

So now he's changing his story yet again?

Bernie, you're the best dude...I love you...ain't been on your blogsite for a couple days now...went back to work...this past Monday. Missed the hell outa bloggin' with ya everyday since last November...you're the best, dude...you post at least a blog-a-day on your site, which is like a blog-a-month-or-two on some other sites. U da man, Bernardo!!

Anon, A compliment? I'm not used to those. But I thanky you for your very nice words. If this site is good, it's because of people like who who contribute the commentary. And there are a few dudes who post quite a bit. NewsOverCoffee does so. And Chris Casey has at least 7,000 blogs and is simultaneously writing a novel. There's been an explosion since November. Check out The Wilkins Times, LVDem (he's toning it down), Gort42, PaProgreessive and ABigFatSlob, just to name a few. The blogospher is alive and well, and I'm glad you're back.

I hope he entered the backdoor in Georgia on the mistress. Then he could do serious jailtime!

Let alone the irony of what the cellmates would do to Newt for what he too did.

Maybe the republicans are hell bent on "Mexicans" because the fear a Dirty Sanchez.