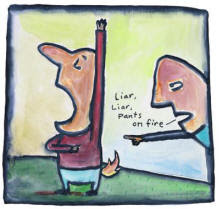 I've told you what happened before last night's citizen's panel review of Northampton County elections. Now let me tell you about the meeting itself. Task force members Peg Ferraro, Greta Browne, Jack Bradt and Dick Benner agreed to send a letter to the Department of State, seeking answers to certification questions about touchscreen voting machines supplied by Advanced Voting Solutions. They also formalized a survey for candidates, elections workers and voters. The fireworks display came from the peanut gallery.
H.R.H. DePaul's Hired Gun

First and foremost was Larry Otter, an attorney retained by voting registrar Deborah DePaul. He ingratiated himself with both the peanut gallery and the task force by insulting everyone. Otter's claim to fame is that he represented Carl Romanelli, who sold his soul to the devil in an attempt to get on the ballot for U.S. Senate. We all know how that turned out. Otter refused to sit in the peanut gallery with the rest of us. He's too important. According to H.R.H. DePaul, Otter was hired as a "buffer" to protect her "from the falsehoods and basic lies."

The panel was warned it must stop making "outlandish" statements about poor H.R.H. DePaul. When asked what he meant, he said the panel had called DePaul "incompetent." When asked to say when the panel had called her that, he could not give an answer. This dude even managed to offend panel member Jack Bradt, who previously had nice things to say about H.R.H. DePaul. Strike One.

After alienating the committee studying problems in the elections office, Otter turned his wrath on The Express Times and Morning Call, claiming that both papers had lied about his client. Once again, he was asked to provide an example. "The local media need to get their facts straight." The one "lie" identified, is an Express Times allegation that eight people have recently left the office. And that statement happens to be true. Eight people have left the office over the past three years. This turnover is one reason DePaul has given for office problems. Steeerike Two.

Otter couldn't stop with the committee and newspapers. He also blasted local Republican chair Roy Shuman, who has complained that H.R.H. DePaul's office is too partisan. Shuman's charges are "unfounded" and "outrageous." And he minimized complaints about our misleading straight party ballot, complaints expressed by both parties. "Got a problem? Take it up with the state legislature." Strike Three. You're outta' here.

Roy Shuman, the dude making these "unfounded" and "outrageous" allegations, was next. He thinks we all "should be treated equally," and it's not happening. It was hard for Shuman to make his points. Whenever he offered a criticism, either H.R.H. DePaul or hired gun Otter would interrupt, something they attempted all evening. Shuman nevertheless insisted there is "preferential treatment," and brought committeewoman Mary Barket to prove his point.

Barket explained what happened recently when a county council candidate was only given five copies of a nomination petition.Barket called about making copies, and H.R.H. DePaul blew up. She accused Barket of "setting her up." Amidst H.R.H. DePaul's repeated interruptions last night, Barket finally turned and flatly said, "It became personal and there was no reason for that. You went from 0 to 60 very quickly."

And the flurry of emails that followed this exchange troubled Roy Shuman because no emails were sent to him. He complained Dem chair Joe Long was getting emails about a problem with republicans, but nothing was being sent to Shuman. H.R.H. DePaul, who has said repeatedly she always notifies both parties whenever she interacts with either party, interrupted Shuman to say, "I don't have your email." Huh? But I thought she said .... never mind.

Three judges of elections addressed the panel last night. Two out of three like the new machines. But a Moore Township judge complained that, at the end of the evening, it was impossible to transfer data into the master. This is exactly what happened when AVS demonstrated the touchscreens to the state.

About four members of DePaul's staff were on hand to defend their boss. They claim they're very happy. They approach problems as a team, and had a few disparaging remarks about DePaul's predecessor. I have no criticism of DePaul's staff. I think they're hard workers. I think DePaul's a hard worker, too. But they seemed scared to death when I visited the office last week. Maybe it's my nose. They said last night they resented my previous depiction of H.R.H. DePaul as a witch. Hey, it was a queen! She has referred to her "reign" as registrar, so I'm trying to show the appropriate respect. Maybe I should bow when I see her.

Millan, Congressman Dent's evil campaign manager, voices two concerns. First, he notes that the Morning Call, which collects data from each precinct, had very accurate results the day after the election. But unofficial results from the elections office were completely different. Thirteen days later, when official results were released, it appeared that the "lying" Morning Call had it right all along. "How do you blame the machines when the results reported in the papers were accurate?" The variation between unofficial and official results in the congressional race was an unacceptable six percent, compared to one percent or less in other counties. And in State Senator Browne's race, it was a whopping twenty-two percent! Shawn, it's unfair of you to use facts to support arguments. That could start a dangerous trend.

Millan's second criticism, a little less factual, was directed at a ballot designed to encourage straight party voting. He called it a "partisan design that doesn't benefit our democracy." Although we nearly all agree that the ballot was badly designed, I don't think there's any evidence it was intentional. But Millan promised, "It's something we'll be looking out for in the future. It won't happen again." I believe him.

Joe Long, when he addressed the panel, first complained no one has sent him invitations. Gee, Joe, I never got an invitation, either. Then he complained couny exec John Stoffa never returns his calls. I thought he'd start singing, "You don't send me flowers anymore," but he stopped himself.

Right after Republicans complained about DePaul's partisanship, Long commended her and droned on about how much Dems love working for her. He should. His daughter worked there until last year. That's a great way to prove she's nonpartisan, Joe.

Now Long tried denying this. "That's not true. She left before I became county chair." Courthouse records reveal Long's daughter was a part-time elections office worker between April 2002 and July 26, 2006, and Long claimed last night he's been the Dem chair for the past six years. Little things like that make republicans suspicious.

But Joe didn't stop there. He called the elections panel a "witch hunt and public whipping post" for H.R.H. DePaul. "We want people to vote." He's concerned this task force might discourage people from voting. Stoffa has asked them, "How can we do better?" That really should deter voters.

Both The Morning Call and Express Times have excellent, and far more objective, accounts of last night's meeting. The citizens' panel will meet again at the courthouse on March 14 at 7 P.M. You can email any concerns to voter.info@northamptoncounty.org. Minutes are posted on the left sidebar.

The fact remains, Northampton County Executive John Stoffa bought the touch-screen voting machines, over the strenuous objections of many.

Stoffa broke what until the touch-screen machines had been a far more reasonably reliable process.

Stoffa substituted that process with a mess, and he owns it.

After one year in office, Stoffa has proven what many of us like John Todaro of Palmer Township from the beginning:

The hang-dog, pious-appearing Stoffa, a former HRD career bureaucrat in two "Lehigh Valley" counties - Lehigh and Northampton - and former Northampton Area School District who could't even persuade a majority of his board colleagues to suuport Act 71, "Legalized" gambling, and its corollary, Act 72, the "back-end" voter referendum.

His fellow board members understood that neighter "legalized" slot machine gambling nor the "back-end" voter referendum shot through with loopholes would provide significant reductions in school property taxes.

And now Stoffa wants property reassessment, at a time when an increasing number of Northampton County taxpayers can't shoulder the property-tax burden already laid on them.

BY HER JOLLY BOOTS OF DOOM!

Anon, Did Buddy Christ put you up to that?

Buddy Christ will be addressing county council tonight. I think he may be in the running.

Buddy Christ should run for Council. He'd have my ear!!!

I always hate County Council night, because my beloved Tic Toc gets more crowded then. There goes my quiet.

One question Bernie or Billy: Is Billy running for County Council or Mayor? I'm kind of wondering here.

Hey, let's be nice to Billy for a bit here! Tonight he was pretty much on topic.

I didn't have to wear out the scroll wheel on my mouse to bypass his post. I actually found myself reading it!

I was directed to this site by someone truly concerned. I am quite certain I will not return but I want you to know that you can seek help or guidance that God always answers. To seek out joy or gratification in other's pain is impious. It also is a cry for help. Delete this if you so wish as it brings me contentment in my soul just to reach out to you.
Be not overcome with evil, but overcome evil with good.
- Bible - Romans 12:21
God Bless You.

Since I stood next to Sen. Boscola at a polling place for 12 hours in November, I can honestly say that the "Do you want to vote a straight party ticket?" screen was THE #1 complaint of voters as they were leaving.

It was confusing, there was no clear and simple way to "get around it" if you were unsure, and there should have been a more instructive YES/NO screen BEFORE forcing voters to make a selection. A redundant "are you sure?" screen asking voters to confirm their straight-party choices or GO BACK would have also helped a great deal.

Despite what Shawn said (I mean, he HAS to say that), I think it was basically a wash for both parties and neither party can show any evidence or really prove that the configuration was maliciously designed to deny straight-party votes to their candidates.

And, who ever said that democracy wasn't supposed to be messy?

Anon 9:52, Geez, and what did Buddy Christ have to say about born again Pharisees like yourself? Bernie 3:14

Bernie, I Just came in from Tic Toc and was disappointed to see you didn't join Ron tonight. You missed out on the great nightlife.

Anon, I'm not being mean to Billy, he was fine in his argument tonight, I just thought he was running for Mayor, not county council? I'm just looking for clarity there....

Bernie K., I think you're right on with your assessment of the voting machines, however I understand that this issue comes from Harrisburg's decisions? I'd be interested to hear your take.

Rising Sun, Billy is running BOTH for Mayor and county council. And because getting on the ballot is too easy as an R, he dropped out last week or two weeks ago and became a GDI (God-damned Independent). Now it should be a snap. Hell, even that might be too easy. He might decide instead to wage a write-in campaign.

Do the GDI's have the same problems the rest of us have?

Somebody just tried to save Bernie O'Hare's soul! I'm sorry but that might be the funnies thing I've ever read. Don't try to save the miserable bastard. He is what he is.

If Buddy Christ announces I want to be his finance director. "Give money to Christ! It's the noble contribution this year."