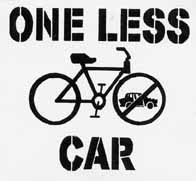 Just two years ago, I rode my bike to the courthouse nearly every day. Contrary to what you may think, most drivers were nice. They'd laugh when they saw me. I loved it. It helped me stay fit. One less car.

Then it happened. One morning, I woke up with terrible pain in my shoulder blade. My cycling and running days were at an end. I couldn't even turn my head. I'm an old fart. One more car.

That was seventy pounds ago. Yesterday, I started again. I rode my bike to work. I'll only be able to do this twice a week until I get in better shape. I walked hills. People still laugh. But other cyclists don't. They're in their own little zen world, listening to their breathing or the noise of a car coming behind them. It felt good to be out. One less car.

I have a heavy duty bike with racks, fenders, headlights, reflectors and Kevlar tires. I call it my BUV. Don't need to gas it up. The only fuel I need is water. One less car.

At the courthouse, where parking is at a premium and people drive for a half hour to fight over a spot, I parked right by the rotunda and chained my bike to a railing. No bike racks. A wind-sensitive fountain at our $45 million judicial palace, but no one thought of a bike rack. I washed off in the men's room, even though it offends prudish council members like asbestos lawyer Lamont McClure. He wants me barred from changing in a frickin' men's room. It might violate his Code of Civility. I can only sit on the crapper. Hey, hairballs have rights, too! That's OK. In a few weeks, when I'm fit enough to drive every day, I'll strap a Lamont McClure sign on my back, and give every driver I see the finger. One less Lamont McClure.

After work, I took an empty LANTA bus part of the way home. Thanks to visionary people like Steve Schmitt and his Coalition for Alternative Transportation, our buses come equipped with bike racks. I rode the last few miles. I was a real sore ass, but there was one less car.

You are a better man than I am Bernie. I was only able to walk to work.

I work 38 miles away from home, I don't have those options. But I run a couple miles in a pool 5 times a week! i hear they are working on technology to get power from waves, maybe that would help!

Congratulatons, Bernie! The National Bike Summit begins today here in DC and I plan to attend several events - especially the legislative session. The next time I'm back in Nazareth, we'll go for a ride!

I'm curious about that pain in your shoulder blade - what was it, how did you get past it so that you can ride again? I expected the next paragraph to be about how you bought a recumbent, which is a common but expensive solution to that problem....
Keep riding....

woo hoo! I walk the hills, too.

Chris, 38 miles is a bit of a trek to a job. What some people do is drive part of the way, park their car, and hop on the bike. I might need to do that for a few weeks until I'm in good enough shape to cover the distnace.

Director of Communications, You're on! Let me know. I should be in good enough shape for a slow 30 mile ride in about a month.

Rich, Before this happened, I was in very good physical condition. I had run a marathon in October, had ridden a century, and was getting ready to run the first Pocono marathon.

It started with a terrible stomach problem. It lasted about 5 or 6 weeks. I couldn't eat and was down to 160. I was very weak and did not exercise.

Once I felt better, I spent an entire day playing baseball with a group of kids. I did a lot of throwing that day.

The next morining, right before I woke up, I felt a terrible cramp. It became more and more painful over the next few days. I went to an MD and was given muscle relaxers. I repeated that trip several times and had no relief. I could not turn my head. The pain radiated everywhere from those smalll muscles inthe shoulder blade.

After about 7 or 8 months, I found an D.O. who started an agressive course of treatment. It included a few chiropractic adjustments, 3 cortisone shots, a course of prednesone, followed by a bunch of anti-inflammatories. In conjunction with that, I got a regimen of dumbell exercises for the shoulder. The exercises provided the most relief, and I'm now about 90%. If it starts to hurt, I start lifting.

He never really told me what it was, but told me if I had seen him right away, it never would hav gotten that bad bc scar tissue had built up.

I gain weight very easily, so I packed on a lot of pounds when I coud not exercise. So now I get to lose weight again.

But there is nothing like riding a bike to work. It feels so nice, especially on a summer morning along the Bushkill creek. You can feel the temp difference and winds, smell the grass and flowers, listen to all the noises of the stream and the birds. By the time I get to work, I've got a big smile. Sometimes, I just keep on riding.

Bernie, Congrats on getting back on the bike!! You are inspiring me to get my poor 'ol road bike out of the shed and get it ready to go. Maybe we can do a SLLLLLLLLOOOOWWWW old fat people's ride in a couple of months? I have to buy a helmet for my little gal for her trailer and then we are set!

Maybe you will get in shape enough to ride with my son??? I'll never keep up with him anymore - he rode almost 30 miles yesterday.

Windgapper, I have one of those trailers, too! They're very nice. I used it for my grandson, and we'd attach a third wheel so he could ride behind me. If I get tired, I make him pedal.

The lack of bike racks in the Lehigh Valley -- especially at public buildings -- is appalling. Kudos to LANTA and CAT for installing bike racks on our buses. (I often see them in use.) If more of us cranked bike pedals rather than stepping on a gas pedal, we'd be healthier and wealthier. I've been known to bike into my downtown Bethlehem office from the West End of Allentown. I'll take the serene canal towpath over the madhouse on US 22 any day. What a way to start the morning and unwind after the day. How often can you say you look forward to your commute?