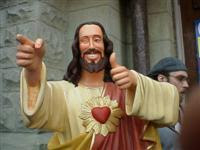 A few weeks ago, LVDem stirred a hornet's nest with his "odd email" post. He claims Northampton County Dem boss Joe Long is "clearing the field" in the Lehigh Valley's next congressional district race for Allentown's Sam Bennett. Since that time, party bosses have threatened blogger Richard Wilkins for talking about it. And Boss Long himself threatened me, but it backfired. You see, I'm into that sort of thing.

But I've got the scoop on all of you. Fellow Nazareth resident Buddy Christ is scheduling a press conference on Easter Sunday outside Sam Bennett's house to announce he's really, really thinking hard about taking on formidable Congressman Charlie Dent.

I tried talking to Buddy, but he ignored me. He's a little miffed at me over his inceremonious removal from District Judge Stocklas' office. "Talk to the hand, 'cos the face don't wanna hear it no more." So instead, I had to listen to him speak to a group of suits at the Pomfert Club, where Buddy knocked over a few tables until he learned it isn't a church. "This ain't a church? You could have fooled me. You dudes look like a convention of undertakers!I'm your brotha' from anotha' motha.' I'm your sista' from anotha' mista.' Who's down with that?"

Christ's campaign manager, Judas "Takes No Prisoners" Iscariot, agreed to an interview after I gave him thirty pieces of silver.

Me: "Do you really think a political unknown can beat Charlie Dent?"

Judas: "Did you see what he did with a few lousy loaves of bread? Money's the least of our troubles. It's his Father who bothers me. He always pops up when we least need it. Just the other day, Buddy was putting the moves on some hot babe. She was putty in his hands. Suddenly the sky gets dark, and we hear a giant baritone 'This is my Son in whom I am well pleased.' It's embarrassing. What if that happens in a debate? That bastard Shawn Millan will tape it, call Buddy a papa's boy, and that's all we'll be hearing on the radio for six weeks. Who needs that?"

you're going to hell man.

"I'm normally not a praying man, but if you're up there, please save me Superman."

If he's going to hell, he will have us for company!

Say, where can I send my check for the "Buddy Christ for Congress" campaign?!

It's one thing taking on Joe Long. Now your screwing with the Lord?
You better hope he has a better sense of humor than Longy does..

I love Lisa and Jenn, but Buddy Christ might be the strongest candidate for Congress yet. I hope the D-Trip is taking a good look.

TomFoolery, Everyone has a better sense of humor than Joe Long.

I remember when Musings from Mudville gave us the "Jesus Study Group" That Republicans were attempting to have Jesus establish residency to run for president with John McCain!

no, rising sun, i know how to spell "sacreligious". this post is "sacrilicious".

Sacrilicious anon, You are a Simpsons fan.

Jesus is a Republican, and if he isn't I wouldn't vote for him. I don't support party switchers.

There. Now I'm going to hell too...not that that's news.

Jesus is not eligible to run for anything in the us. If he is here he's an illegal Alien

I agree with LVDem: you're going to hell.

Bernie "Takes No Prisoners," I'll be so busy renewing old acquaintances it will seem like heaven to me.

Do you have any naked pictures of Buddy Jesus? You Lehigh Valley types seem to have an adversion to clothing. I'm thinking of a certain blogger and a school principle.

Jesus is no Republican, Julian. If He were, He wouldn't have permitted this Republican Commander in Chief & his administration to have so poorly treated our wounded soldiers from the wars in Iraq & Afghanistan. This behavior is both shameful & sinful, Julian.