A Lehigh Valley Health Board is in the Works 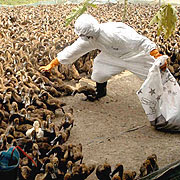 It was late September when people began to get sick. In days, the disease spread across the state, from Philadelphia and Pittsburgh. Government collapsed as the illness ripped through firemen, policemen and garbage collectors. There was no room for the bodies.

Public gatherings were banned. Schools, churches and movie theatres were all closed. Mothers watched their children die, before they themselves went gently into that good night.
Sounds like one of those disaster movies, eh? No. It really happened back in 1918. It's remembered as the Great Pandemic. As suddenly as it come, it was gone.

Are we ready for the next one? We better be, because we're overdue.

Margaret Potter, associate dean at Pittsburgh's Center for Public Health Practice, explained how we could all benefit from a regional health bureau. Restaurant inspections, drinking water tests and infectious disease watches, are just a small part of a public health department. They also provide immunizations, STD investigations and nutritional programs. They also take some of the pressure off local hospitals.

What's most amazing about this program, and a surprise to Dean Potter herself, is that we might be able to form a bi-county health department without spending any local money. Ron Angle hounded Potter for specifics, but she's still working out details, and those won't be ready for a few months.

When Angle kept insisting that we would end up paying for this, a board member (his name escapes me) explained that we already pay taxes for a health board. "We're already being taxed. We just want some money back."

Lehigh County recently adopted a resolution creating a Lehigh County or bi-county bealth authority. Last night, Potter explained that the existing health bureaus in Allentown and Bethlehem would be left intact, and the health department would be expanded in small phases around those departments.
Posted by Bernie O'Hare at 3/02/2007 12:01:00 AM

Email ThisBlogThis!Share to TwitterShare to FacebookShare to Pinterest
Labels: board of health, Lehigh Valley, pandemic

A Lehigh and Northampton bi-county health department is the pet project of former Northampton County Councilwoman and U.S. Senator Rick Santorum congressional aide, County Executive John Stoffa, the Weller Health and Wellness-Dorothy Poole Foundation, East Stroudsburg University, and the "Lehigh Valley's" hospitals, all of which are non-profit except the for-profit hospital in Easton.

Ironically, Dr. Lyon and his staff made their pitch at the meeting in which county council questioned the value to county taxpayers of another Lehigh-Northampton bi-county body, the Lehigh Valley International Airport (LVIA), known simply to commercial airline pilots world-wide as the Allentown Airport.

Councilman J. Michael Dowd said the LVIA, operated by an authority, incurs no cost to Northampton County taxpayers, but that is not factual. The authority is organized as a non-profit and is thus exempt from the payment of taxes to Northampton County or to any of the municipalities whose real estate it occupies.

Dr. Lyon and his staff also made their pitch at the meeting in which council members went into executive session to discuss the lawsuit that Wind Gap Borough has brought against the county and its General Purpose Authority, issuer of the 2001 $111 million megabond.

Last night's meeing was helpful to me in other respects. It led to my decision to support for mayor of Easton in the May 15 primary Pat Coliccio, who spoke at last night's meeting and expressed astonished disbelief at the kleptocratic governments of Northampton County and its seat Easton.

A further account of this firing as it relates to last night's county council meeting has been posted on my Billy Bytes blog.

Billy's ramblings detract from what should otherwise be viewed in a positive light. Intergovernment cooperation is lacking in PA and Norco and Lehigh are trying to be the leaders of something positive. Credit to both county's elected officials.

I heard the presentation regarding the possiblity of a bi-county health board between Lehigh and Northampton County and I was not impressed. There were too many questions that still need to be answered. I have to agree with Angle that I don't see how this is not going to cost the county more money in the long run even though they claim that we are missing out on state aid now. Plus the question of where to put these offices and how many, which asks the question how many employees do we need plus the costs of buildings and such do we need to serve the needs of all people who are elgiblie for these services while serving the most people. As Mr. Branco stated, the drive for residents will be far.

Ron's point about the county having to pay to take some of the burden off of the hospitals was good. I know that is not what the purpose of the health board, but the point is, as was it in the Moring Call article, we have wealthy hospitals in the area awash in cash, and why are they not doing more to help the community? Some of the services that a health board provides such as low-cost vaccinations could easily be paid for and provided by some of the area hospitals.

As someone who has used NC human services with in the past year, I am not impressed by what the service I received. I have doubts about the level of service that will be provided when coverage will have to be spread over two counties.

The first name of the guy that you didn't know his name was Steve, but I didn't catch his last name either. I believe he was also a doctor.

The whole idea of a health board did come from Mary Ensslin, a former council member who herself now works for LV Hopsital. I have little regard for her. I support Angle, and he found all kinds of reasons to condemn this project.

But a good idea is a good idea. This is worth pursuing. And Ron's performance last night was one of his worst. He alienated a lot of health care professionals who are working hard, and on their own time, to see whether a health board is feasible, even without funding. It was a parochial display, and Angle wasn't being open minded.

Last night's report was a status report, nothing more. It is becoming increasingly obvious that these folks might actually pull off a miracle and be able to propose a practical health board.

There are many questions to be answered. But first things first. Council charged the health board to learn whether this could be done at no cost. The board's answer is yes, and that even better economies are realized if this is approached regionally.

This is something that makes sense. It is long overdue in this area. Rather thasn condemn this idea out of hand without giving these folks an aopportunity to come up with specifics, why not let them come up with a specific plan?

As I recall, I attended the meeting of Northampton County Council that approved the Interim Health Department.

As I recall, it was in December and my friend John Todaro, who usually accompanies me to the meetings, did not attend that evening: He and his lovely wife Rosina and her brother had left earlier in the day on a flight to Florida.

I do remember distinctly, however, that Jean Mateff was at the meeting,as was the entire Northampton and Lehigh County Pennsylvania state legislative delegation, including then-state Senator Charlie Dent before his election as representative of the 15th Congressional District.

In fact, I remember that the legislative delegation came to the meeting under the deceitful pretense of presenting Councilman Wayne Grube with a certificate honoring his prowess as a football player and coach.

Finally, I remember that it was one of the many council meetings from which I was forcefully removed by deputy sheriffs.

Last night, when John Todaro and I entered the Government Center, I recognized one of deputies who with another deputy had removed me from one of the meetings, and he recognized me and we exchanged comments about the incident.

I couldn't agree with you more: We must have debate. I suggest that it begin with the eight Northampton County Council members who, irrespective of their political party affiliation, routinely fail to second Councilman Ron Angle's motions.

So the genesis of Northampton's closed, covert government are these eight council members themselves.

Their obvious motive is to gag Angle, to stifle public debate. What's not debated in council chambers won't be picked up by the attemdomg reporters and publicized in the press.

In fact, these "reporters" from the mainstream print media (the meetings are almost never covered by WFMZ-69 of WLVT-39 TV News) rarely publicize comments made by speakers like Palmer Township citizen and taxpayer John Todaro in the so-called "public comment" segment of the meetings.

Mainstream news in the so-called "Lehigh Valley" is "managed news," as former downtown Easton businessman David Clark and I have reported in articles published on the www.billybytes.com website.

"...Today's idols are the objects of a systematically cultivated greed: for money, power, lust, glory, food, drink. Man worships the means and ends of this greed: production, consumption, military might, business, the state. The stronger he makes his idol, the poorer he becomes, the emptier he feels. Instead of joy he seeks thrills, instead of life, he loves a mechanized world of gadgets, instead of growth he seeks wealth, instead of being he is interested in having and using."

So, Billy, how 'bout dem Cubs?